Florida Grand Opera To Stay In Broward Center In 2015-16 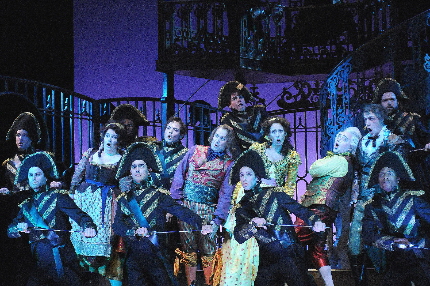 In a third act rescue complete with a mysterious hero or heroine in the shadows, the Florida Grand Opera will continue to perform in Broward County next season, its leaders announced Monday.

The financially-challenged FGO did not quite raise the $600,000 that officials said they needed from individual donors to make continued performances in Broward fiscally responsible.

But an anonymous philanthropist who volunteered last month to match individual donors’ funds has agreed also to make up the $15,620 shortfall, a news release stated.

FGO has been reassessing all of its operations to stay solvent and feared that it would have to cancel its 2015-2016 season at the Broward Center for the Performing Arts – leaving the county without a large-scale opera production for the first time since 1943. FGO lost $125,000 in the 2013-2014 season as tickets sales ebbed in Broward.

FGO announced that it needed $600,000 to continue moving its productions from the Arsht Center for the Performing Arts in Miami up to Fort Lauderdale. Because the Broward Center had to lock in dates, the fund drive was only supposed to last until Jan. 31, but was extended two weeks when Broward Center officials said it could wait a little longer.

About $200,000 of the $600,000 had been identified as coming from previously dependable donors. But that left $400,000 to be addressed by new donations and the matching benefactor. Among the private donations were 68 new donors, FGO reported.

The number of productions in Broward has been cut back slightly over the years and the 2015-2016 season in Broward will only have two works: Rossini’s The Barber of Seville on Dec. 3 and 5, and Bellini’s Norma on Feb. 11 and 13.

“We are extremely glad to be bringing both The Barber of Seville and Norma to the BCPA next season. We are disappointed that we were unable to meet this attainable fundraising goal, but we are thrilled to welcome so many new donors to our family,” said General Director and CEO Susan T. Danis. “We hope to bring a full season of opera to the (Broward Center) in the future but the fundraising need will be great and hope to be able to count on the growing support of the community to keep opera in Broward.”

This entry was posted in News and tagged Florida Grand Opera. Bookmark the permalink.