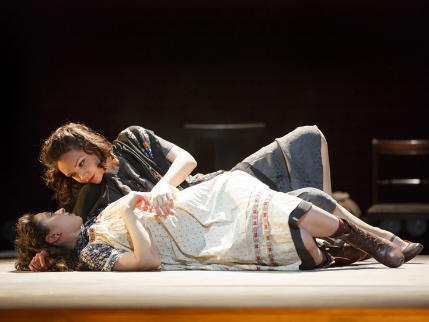 A scene from the Broadway production of Indecent

In what is believed to be a groundbreaking  move, Palm Beach Dramaworks and GableStage plan a co-production of the acclaimed Broadway play Indecent to be mounted next fall.

The production will be cast and mounted first in West Palm Beach by Dramaworks resident director J. Barry Lewis in October 2018. Then the entire cast and production will move to Coral Gables in November. The only changes will be to alter the set built by Dramaworks’ staff and the lighting to accommodate the different stage configuration.

Co-productions have occurred rarely in this region and never among the larger local companies. Maltz Jupiter Theatre has worked with troupes based outside the three-county area. But the concept has been discussed for years among artistic directors and producers recognizing the common tastes of audiences in Palm Beach and Miami-Dade counties.

Indecent was one of the most high-profile plays last season in New York. The drama punctuated with music was a highly theatrical examination of intolerance censorship, anti-Semitism and homophobia told in amid the magic of theater, European Jewish culture, the Yiddish Renaissance and the Holocaust.

The drama was co-created by playwright Paula Vogel (winner of the Pulitzer for How I Learned To Drive) and director Rebecca Taichman. It marked the first time Vogel’s work was staged on Broadway.

The production nearly closed early on Broadway due to flagging ticket sales, but a public outcry (and Tony Awards to Taichman and the lighting designer) prompted lead producer Daryl Roth to risk extending it. She was rewarded with improved box office numbers and the chance to have the production filmed for broadcast this coming November in PBS’ Great Performances.

“We’re two serious theatres with distinct profiles that bookend the tri-county area, and we’d never pursued the same play. But we both adored Indecent when we saw it in New York, and were passionate about producing it in 2018. We’re friends, and we have great respect for each other’s work, so we decided to explore the possibility of a co-production. And we came to the conclusion that a joint production would be advantageous to both theatres, to our audiences, and to the actors.

“The theatres will share design costs and some marketing expenses, the production will have a longer life and be seen by more people than usual, and the cast will have the luxury of exploring their characters for an extended period. Beyond that, the production underscores the vibrancy of the South Florida theatre community; we’re collaborative, not competitive.”

Indecent depicts the development of a real-life play called God of Vengeance written in 1906 by Polish writer Sholem Asch. That play told of a Jewish brothel owner whose daughter falls in love with one of his whores. Creating controversy that such people exist in the Jewish culture, Ashe’s play and the ensuing production quietly accepted the homosexuality as natural, although the fictional father and his society do not. The play ends with the father renouncing his God and forcing his daughter to work as a prostitute in his brothel. But the life-affirming passion of the women’s love is underscored by a key scene late in the work when their souls connect and they prepare to make love in the rain.

The Vogel-Taichman play traces the work’s journey from a first reading in a Warsaw literary salon through numerous somewhat successful productions by a Jewish troupe throughout Europe and then to Greenwich Village in 1922. It became infamous when two weeks after opening on Broadway in 1923, the cast and producer were arrested for “unlawfully advertising, giving, presenting, and participating in an obscene, indecent, immoral, and impure drama or play” because of the lesbians’ kiss.

Indecent depicts this story as if a group of European Jewish thespians are gathering on a nearly bare stage to tell the tale to the audience. Vogel’s scenes are interspersed with scenes from Asch’s play. The Broadway production was remarkable for its brilliant staging. (To read our review of the Broadway production, click here) Most striking was a lyrical love scene in the rain between two women.

“I read Sholem Asch when I was 14 years old, so I feel I have a direct connection to the material,” said Adler. “I grew up in Brooklyn, in a Conservative Jewish home, and I knew about Yiddish theatre. I talked about the issues in Asch’s plays with my parents, and I was aware that he got in trouble way back when for writing a play about lesbianism. I knew all about the characters in God of Vengeance, and about the actors who appeared in the play. My knowledge, my background, and my relationship to Yiddishkeit, made me very eager to stage Indecent.”

Hayes added, “What intrigued me most, and made me want to do this play, is its simple and beautiful love story. The relationship between Rifkele and Manke is pure love, and I found that very moving. I also learned something more about the Jewish experience and about Sholem Asch, with whom I had just a passing acquaintance. The beauty of Indecent is that it speaks to everyone, regardless of their background, and underscores the impact of artists on society.”

In our review of the Broadway production, we wrote, “The play will not likely tour although it was launched at Vogel and Taichman’s home base with the Yale Repertory, mounted at the LaJolla Playhouse and opened off-Broadway at the Vineyard Theatre before coming to Broadway. A local South Florida company might be enticed by the subject matter, but be warned that it will take a committed cast and an inspired director to make it work.”

And South Florida has found that twofold.