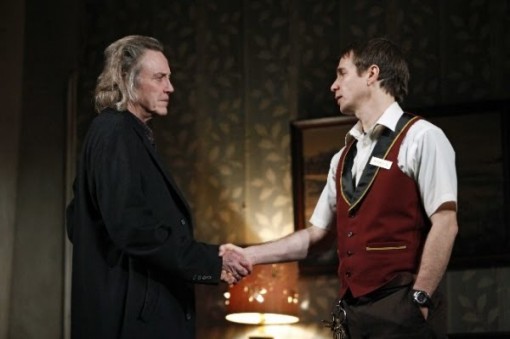 Christopher Walken and Sam Rockwell in the Broadway production of "A Behanding in Spokane."

Several theater companies have announced some exciting prospects for the coming 2010-2011 season, among them Actors’ Playhouse mounting the monumental August: Osage County and the world premiere of local hero Nilo Cruz’s The Color of Desire.

But in the last-but-not-least category comes producing artistic ‘director Joe Adler announcing a classic GableStage season as quirky and headline-grabbing as any other.

The big news is that Liberty City native Tarell Alvin McCraney will finally get a full-staged production of one of his plays in South Florida when Adler presents The Brothers Size on Aug. 27 ‘Sept. 25, 2011.

Casual theatergoers may not have heard of McCraney, but the 1999 graduate of New World School of the Arts is one of the most acclaimed up-and-coming playwrights in both this country and in Great Britain.His intensely theatrical works about African-Americans living in the South has been singled out for dialogue that mixes vernacular, dialect and near poetry. McCraney’s’work has been done at most major cities in the United States, and showcased by Steppenwolf in Chicago, McCarter in Princeton and the’Royal Shakespeare Company in England.

The GableStage play is part of his best-known work, The Brother/ Sister Plays trilogy. Set in the Louisiana bayous, The Brothers Size explores the struggles of two brothers who walk the line between law and liberty, locked in a fierce tug-of-war for their souls.

Gless (Cagney & Lacey, Burn Notice and Queer as Folk) stars as a retired teacher who has not had sex in 30 years and sets out to remedy the situation by placing an ad in the personals in the New York Review of Books. This is the story of a woman who decides there is still time to pursue passion with a vengeance.

The sexually frank play by Jane Prowse is adapted from the 2003 autobiographical book by Jane Juska. The play premiered in San Francisco in January with a different director. Prowse, a friend of Gless’ who lives in England, will direct this production. That’s a slight departure for GableStage. Adler usually directs every play in his season, but he hired Amy London to direct Speech and Debate this summer. Casting begins Sept. 20 for the show, which has six characters.

The play opening the season is also the least surprising choice. Anybody who saw Martin McDonagh’s A Behanding in Spokane on Broadway last spring with Christopher Walken knew it was only a matter of time before Adler would be mounting it here.

Although atypically set in the United States, Behanding would fit well in McDonagh’s vision of Ireland ‘ a dark comedy alternating terror, humor, farce and pathos in the space of a few seconds, much like his The Lieutenant of Inishmore, The Pillowman and The Beauty Queen of Leenane.

This edition features a deranged hit man who has searched for decades for his hand, which was cut off by bullies. Two young but amateurish con artists claim to have found his hand and want to sell it back to him. There isn’t much blood spilled in this one, but there is one moment guaranteed to endanger anyone with a pacemaker. It plays Oct. 23-Nov. 21.

Another fresh-from-Broadway entry is last season’s Superior Donuts by Tracy Letts. It’s a gentle comedy-drama completely different in tone and aspirations from Lett’s Pulitzer-winning August: Osage County or his rough dramas that have played at GableStage, Bug and Killer Joe.

It tells of a disillusioned hippie/draft dodger who has retreated from life by running his father’s neighborhood donut shop. The white shop owner is thrust back into conflict by taking on a street-smart black youngster as an apprentice. The shop owner wants to encourage the kid’s artistic dreams but is unaware of secrets that threaten that future. In New York, the lead was played by Michael McKean wearing the kind of gray ponytail that Adler used to sport. It plays Feb. 26-Mar. 27.

Ruhl (Clean House and Dead Man’s Cell Phone) won critical applause for this comedy about marriage, intimacy and electricity. It’s described as how the titular device produces ‘a ” a story of repressed sexuality and physical exploration with equal doses of humor and emotion.’

Rounding out the schedule is Masked, written by Israeli author Ilan Hatsor in 1990. Adler describes it as: ‘An explosive play about three Palestinian brothers locked in a life-and-death struggle over issues of deception and betrayal. Set in a village on the West Bank in 1990, with the Israeli-Arab struggle as its backdrop, it depicts the tragedy of one family torn between duty, kinship, principles and survival.’

Reportedly, the work has been embraced by partisans on both sides of the Mideast struggle and been produced both in theaters and small cities in the region. It plays July 2’31.