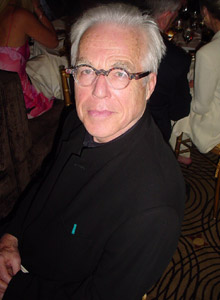 Florida Atlantic University’s theater department is presenting John Guare’s drama of emotional intrigue and introspection among the upper crust, Six Degrees of Separation, slated for Oct. 1-10 in the Studio One Theatre in the Boca Raton campus.

The plot depicts a charismatic young man claiming to be Sidney Poitier’s son who shows up on the doorstep of a wealthy Manhattan couple, is invited to spend the night and begins a seductive con job that will force the couple to examine their views of race, class, social-climbing and their relationships with everyone they thought they knew.

The 1993 Broadway run starred Stockard Channing as the doyenne, but the con man was played over its long run by Jame McDaniel who would later be the squad lieutenant on NYPD Blue and Courtney B. Vance, later the prosecutor on Law & Order: Criminal Intent. Secondary were filled out by later-to-be-heard from names as Anthony Rapp, Laura Linney, Evan Handler, John Cameron Mitchell and Paul McCrane.

The FAU production runs weekends and contains strong language and full frontal male nudity. Tickets may be purchased by visiting fauevents.com or by calling 800-564-9539.