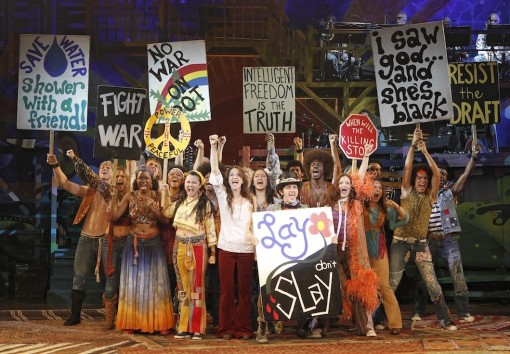 "Hair" will be among the Kravis Center's theater offerings in the 2011-2012 season. Photo: Joan Marcus

A family you don’t want to see move in next door, naked hippies, cross-dressing chorus boys (or girls), the ghost of Frank Sinatra and those singing revolutionaries will be bused in to West Palm Beach during next season’s slate of national touring companies as part of the Kravis On Broadway line up.

Five musicals will play the Kravis Center for the Performing Arts during the 2011-2012 season, according to the schedule released this week.

The Addams Family, a mainstream musical about a group of decidedly non-mainstream relatives, plays Nov. 8-13. Based very loosely on the cartoons in The New Yorker, the ’60s television sit-com and the films, it follows the family’s efforts to clean up their act to impress the parents of Wednesday’s uppercrust fianc’.

Boomers who don’t want their kids to see how na’ve, idealistic and stoned they once were should not take them to see the joyously irreverent revival of’Hair from Jan. 10-15 in 2012.

The third major production of’La Cage aux Folles, a family values show about a gay couple whose son wants to get married, brings its spangles and beads to the Kravis Feb. 14-19.

Choreographer Twyla Tharp, who created the Billy Joel dance musical’Movin’ Out, does the same ‘ sans plot ‘ with the Frank Sinatra songbook with’Come Fly Away from March 13 to 18.

The season ends with the 25th anniversary production of’Les Miserables from May 16-26. When this completely overhauled edition came to the Broward Center this year, it featured African-Americans in the roles of Jean Valjean and Eponine.

Current subscribers will receive their renewals in the mail later this month. Kravis Center donors will also receive information on becoming a subscriber. Single ticket sales will be announced later this year.