Kravis on Bway: Catch Me If You Can, Maroulis in Jekyll & Hyde, Priscilla, Poppins, Billy Elliot, Jersey Boys 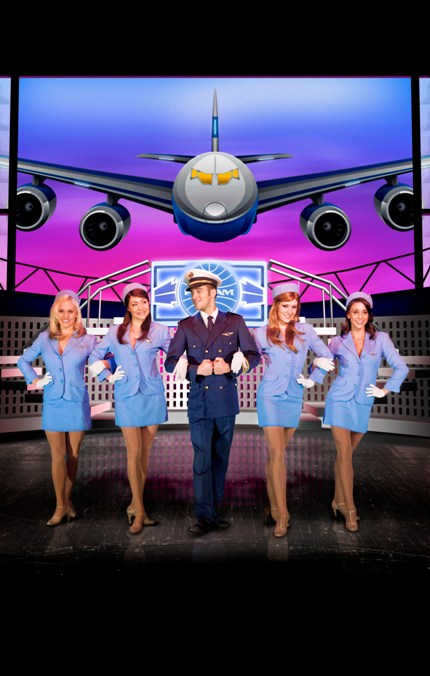 By choosing its own schedule, the Kravis Center has several titles in its 2012-2013 slate of musicals on national tours that you won’t see at the Broward Center or the Arsht Center.

The Kravis on Broadway program, entering its fifth year as a standalone programmer, will be the sole regional venue offering the musicals Catch Me If You Can, based on the Steven Spielberg/Leonardo DiCaprio film, and a revival of Frank Wildhorn’s Jekyll & Hyde starring Constantine Maroulis of American Idol fame.

The season kicks off Nov. 13-18 with Catch Me If You Can, which won a 2011 Best Actor Tony Award for Leo Norbert Butz in the role of the FBI agent that Tom Hanks played in the 2002 film. “Inspired” by real events, the show was only a modest success on Broadway but had fanatical followers and boasts a blue ribbon creative team: a script by Terrence McNally (Master Class), music and lyrics by Scott Wittman and Marc Shaiman (Hairspray and the TV series Smash), director Jack O’Brien (Hairspray) and choreography by Jerry Mitchell (La Cage aux Folles revival). The story, set in the swingin’ 1960s, focuses on Frank W. Abagnale, Jr., a teenager who runs away from home in search of the glamorous life. With nothing more than his boyish charm, a big imagination and millions of dollars in forged checks, Frank successfully poses as a pilot, a doctor and a lawyer — living the high life and winning the girl of his dreams. The entire show is performed as if set in a 1960s television variety show. The production is non-Equity but is being presented by the same producers of the non-Equity Come Fly Away that recently played the Kravis and the Arsht.

Just in time for the holiday snowbirds is the monster hit, Jersey Boys, an actual book musical rooted in the jukebox songbook of Frankie Valli and The Four Seasons. Slated for Dec. 19-Jan. 6, the infectiously energizing show sold out when it first played the Kravis. Catch a bit of the energy by looking at scenes of the show by clicking here.

One of the Sherman Brothers died recently, but their music for Mary Poppins has the half-life of Strontium-90. Witness the enduring stage incarnation of the Disney film (very, very loosely based on the P.L. Travers books). It flies into the Kravis Jan. 29-Feb. 3. For a look at the Broadway version, click here. http://disney.go.com/videos/#/videos/

One of the most popular musicals of recent years, and still playing on Broadway, is the stage adaptation of the film Billy Elliot coming to the Kravis March 5-10. Set amid the labor battles between miners and the government in the northern English coal fields during the 1980s, the story explores a boy’s discovery of his talent for ballet dancing and the possibility that it could be his ticket to escaping poverty and a dying way of life. The script is by Lee Hall who wrote the 2000 film screenplay and the music is Elton John who produced a far superior score to the one he phoned in literally for Aida. Take a look by clicking here.

Composer Frank Wildhorn is one of the most polarizing forces on Broadway: a large percentage of critics are unimpressed by his work (he had two shows dismissed in New York within the past 12 months) and a larger percentage of audiences adore it. Few of his works inspire such a split as his breakout show, the 1997 Jekyll & Hyde. Producers claim to be prepping a “pre-Broadway” revival for April 2013 starring American Idol graduate Constantine Maroulis as the good doctor (and with a shake of his shaggy mane, the not-so-good serial killer) and R&B’s Grammy-nominated Deborah Cox as his doomed love. The new production arrives March 26-31. Skeptics of Mr. Maroulis’ ability to do the role should be assured that his Tony-nominated performance in the lead of Rock of Ages was one of the show’s major assets.

Closing the season, April 23-28, is Priscilla Queen of the Desert. Not fresh from Broadway – it still is playing on Broadway until the Tony Awards –Priscilla is drawn from the 1994 Australian film, this glitzy musical features a jukebox full of disco hits (“It’s Raining Men” and “I Will Survive”) and Tony-winning costume designs. The story centers on two drag queens and a transsexual crossing the outback in a battered old bus (the titular Priscilla) for a cabaret gig in the hinterland and interacting with the provincials along the way. For a look, click here.

Subscribers for the Kravis on Broadway series will receive their renewals in the mail in early April. New subscriptions are $175 to $505 and go on sale July 13 to the general public. Individual tickets will be offered later this year. For more information call (561) 832-7469 or (800) 572-8471, or visdit kravis.org/broadway.

This entry was posted in News and tagged Billy Elliot, Catch Me If You Can, Constantine Maroulis, Deborah Cox, Frank Wildhorn, Kravis on Broadway, Mary Poppins, Raymond F. Kravis Center for the Performing Arts. Bookmark the permalink.