Light-Hearted Spotlight On The Arts TV Show Debuts Next Week 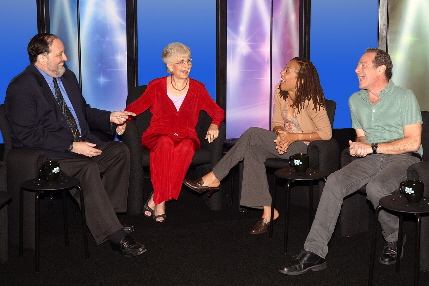 In the shameless self-promotion department: Haven’t you longed to see a local television program focused on the arts, but with a bit of an attitude: a cross between The View and The McLaughlin Report except it has people like Joe Adler talking about theater censorship – without using four-letter words, Justin Moss explaining why opera isn’t just for the rich and intellectual, Christopher Demos-Brown talking about whether a playwright can actually make a living at being a playwright. That’s the idea behind Spotlight on the Arts.

The panel and guests will tackle topics such as, “Why are the arts so important?”, “The Business of Building a Theater,” “How do we engage children in the arts?” and “The Critic’s Perspective.”

“Controversial subjects and lively debate will take center stage in our new format,” promises Acker, who also serves as executive producer, “especially during this time when the role of arts is being challenged in our schools and communities.”

She adds, “We’ve assembled a panel of extremely talented—and very passionate—panelists to take up these important issues with the help of distinguished guests from South Florida arts community. Our audiences can expect an entertaining and thought-provoking discussion each week on Spotlight on the Arts.”

The show will air new episodes weekly on Fridays at 7 p.m. beginning Oct. 11, with repeats on Saturdays and Sundays at 6 p.m. on BECON-TV (Comcast Ch. 19, DirecTV/Dish/AT&T Ch. 63, Atlantic Ch. 83).  The shows also will be archived on the BECON website and a link to it posted here each week.

This entry was posted in News and tagged Bill Hirschman, Iris Acker, Karen Stephens, Michael McKeever, Spotlight On The Arts. Bookmark the permalink.