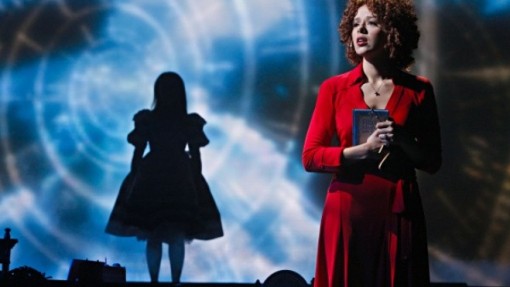 Dacal had the title role last December when Wildhorn mounted a fully-staged multi-media production of the musical at Tampa’s Straz Center for the Performing Arts.
It’s slated to open at the Marquis Theatre, one of the largest houses on Broadway on April 17 with previews beginning March 21.

Dacal created the supporting role of Carla the hairdresser in the original production of In The Heights and just completed a run in the lead role of Nina. But this marks the first time she has originated a major part on Broadway.

The producers had told her recently that she would probably be cast in the New York version because she had ‘offers on the table’ for roles after she finished playing Nina.

Her mother now lives in Naples, but she still has friends locally. Although she has been steadily employed in New York and on the road, ‘I still consider Miami home,’ she said.

In its initial incarnation, Wonderland (no ‘new Alice’ in the title at that point) was a surreal hybrid of both Alice books brought into the 21st Century centering on an ultra-busy businesswoman who loses sight of her family until her daughter goes down the rabbit hole and she gives chase.

Prior to the New York opening, the show will get another shakedown at Tampa’s Straz Center Jan. 2-16.

There was a delightfully anarchic hodge-podge of styles in the rock-heavy score, energetic razz-a-ma-tazz performances including the winsome Dacal, and massive spectacle in its sets by Neil Patel, lights by Paul Gallo, costumes by Susan Hilferty, choreography by Marguerite Derricks and projections by Jon Weston. The creative team remains on board, according to Straz spokesman Paul Bilyeu.

That said, everyone agreed it desperately needed to be hauled into the garage for more work. Its book by director Gregory Boyd and lyricist Jack Murphy was simplistic at times and undecipherable at others. But the real problem was the bloated score. Wildhorn, who wrote Jekyll & Hyde, had songs that went on two or three verses too long. Some production numbers and power ballads were written to give every featured performer a chance to shine, but did not advance the plot a whit or illuminate anyone’s character.

The creative team knew this long before opening night in Tampa. Indeed, Wildhorn’s routine is to retool the work after tryouts outside New York.

In this case, Dacal said, ‘The storyline is same, but there have been several changes. We’ve added some songs, got rid of some. It’s the process. We’ve been trying to get the picture clear. Some characters are being portrayed differently.’

Most of the original cast will be retained including Jose Llana (25th Annual Putnam County Spelling Bee) as El Gato (a Latin twist on the Cheshire Cat) and Karen Mason (Hairspray, Mamma Mia) as the Queen of Hearts. The major cast changes include Kate Shindle (Legally Blonde) replacing Nikki Snelson as the Mad Hatter and Tituss Burgess replacing Tommar Wilson (The Little Mermaid) as the Caterpillar.

Wildhorn and Co. had faith. They already had a concept album selling in the lobby, although some facets had changed even by the time the curtain went up.

The first production cost $3.5 million, all footed by the Broadway Genesis Project, an initiative by the Straz Center to develop new musicals for Broadway plus get a cut of any future profits. The project has received several new scripts to consider, but is waiting for the outcome of the Wonderland experience before proceeding, Bilyeu said.