New Seasons In Spotlight At The Wick And Actors’ Playhouse 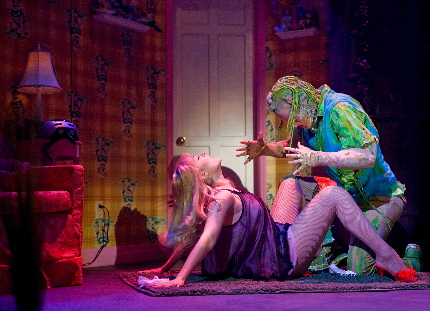 Photo of a different production of The Toxic Avenger, part of Actors’ Playhouse’s next season / Photo by Paula Wilson

Familiar titles and lesser known shows punctuate the 2015-2016 schedules released this week for The Wick Theatre in Boca Raton and Actors Playhouse on the Miracle Mile, ranging from West Side Story to Curtains.

In its upcoming third season, The Wick Theatre is once again doubling down its bet with a new summer season and a 2015-2016 schedule featuring the kind of mainstream blockbusters that have resulted in nearly sold-out houses this spring.

First up is a three-show summer slate when most companies working the summer mount only one or two shows.

July 2-19: George M – After Joel Grey made his name in Cabaret, he cemented his reputation in this star-spangled musical biography of the ultimate song-and-dance showman George M. Cohan. This is billed as a “concert” version of what originally was a full-scale musical.

Aug. 6-23: Pump Boys and Dinettes – This charming down home revue of countrified tunes and gentle backwater humor charmed audiences around the country including several productions in South Florida and a long run in New York City.

The regular season as currently scheduled:

Oct. 1-Nov. 1: A Funny Thing Happened On The Way To The Forum – The first musical for which Stephen Sondheim wrote both the words and music is considered one of the funniest farces in American theater. The original starring Zero Mostel is loosely drawn from several ancient Greek comedies, showing that humor is timeless.

Feb. 25-March 27: Curtains – The last musical that John Kander and Fred Ebb (Cabaret) wrote (with the aid of Rupert Holmes of The Mystery of Edwin Drood), this is a wry satirical romp echoing murder mysteries. The set up is a murder is committed as a dysfunctional theatrical troupe preps a new musical for Broadway and the investigating police detective is a musical theater junkie.

April 14-May 22: I Love A Piano – This intimate musical revue of Irving Berlin’s catalog has proven a popular draw for South Florida audiences.

It’s been a yin and yang second season for the Wick, which has continued fine-tuning its operation and, as CEO Marilynn Wick readily admits, learning on the job.

Its season subscription numbers have increased significantly. One sign of the Wick building a loyal fan base occurred early this winter: Using just its email list and social media on quite short notice, the Wick filled the house for a one-night concert workshop of a developing Broadway show, Song of Solomon, that no one had ever heard of.

On the debit side, it continues to have quiet internal personnel controversies and its high-profile hiring Leslie Uggams as the star of Mame had mixed results.

Tickets for the summer shows are adults $48, children $30 and all three for $129.60. Tickets for the regular season are Grand Tier $65, Orchestra $70 and full-season subscription: $292.50 except Friday or Saturday performances which are $315. Industry rates & student rush tickets are available at Will Call for $30 a half-hour before curtain based upon best available seating. This does not include special events and limited engagements. Valid industry identification (performing union
membership card, Florida Theatre League card or student ID) are required. The deadline for current subscribers to renew their subscriptions is March 15.

For its part, Actors’ Playhouse is in the middle of one of its strongest seasons in recent years – including the epic Ragtime and the noirish Murder Ballad — and is hoping the glow of audiences will carry over into its next line-up which features several entries that its audience won’t know very well as it heads into its 28th season.

A sixth title is still being negotiated but the five penciled in are:

Oct. 14–Nov. 8: The Toxic Avenger — Based on the classic cult film, this rock-pop off-Broadway musical is described “a charming, exhilarating and hysterical love story that has it all – an unlikely hero, his beautiful girlfriend, a corrupt New Jersey mayor, and two guys who play every other character in the play; including bullies, monsters, old ladies and stiletto-wearing back-up singers.” It has music and lyrics by David Bryan (a founding member of Bon Jovi) and book and lyrics by Joe DiPietro, (I Love You, You’re Perfect, Now Change)

Dec. 2–27: The Trial of Ebenezer Scrooge – Mark Brown’s modern sequel to the Dickens classic is described as “It’s now one year since his miraculous transformation, and good old Scrooge is back to his old ways, or so it seems. Ebenezer is now suing Marley and the Ghosts of Christmas Past, Present, and Future for breaking and entering, kidnapping, slander, pain and suffering, attempted murder, and intentional infliction of emotional stress.”

Jan. 27-Feb. 21, 2016: West Side Story — Every year, the playhouse mounts one major large-scale musical. This will be a rare revival of a previous Actors’ Playhouse production, one of the finest musicals of all time boasts music by Leonard Bernstein, lyrics by Stephen Sondheim and a book by Arthur Laurents, featuring stunning choreography.

May 11- June 5: The Tin Woman — Sean Grennan, author of the Making God Laugh from two seasons ago, wrote this funny and moving tale about a postoperative heart transplant recipient struggling with her own survival guilt, who decides to meet the family of the late donor, their son. The grief of the late donor’s family coupled with the recipient’s own questions, fears and doubts evolve into an unexpected and moving resolution.

July 13-August 7: Buyer & Cellar — Winner of the 2013 Drama Desk Award, this one-man tour-de-force comedy was held over repeatedly Off-Broadway. It tells of an underemployed Los Angeles actor who goes to work in Barbra Streisand’s Malibu basement. One actor will amaze audiences playing a handful of roles including himself, his boyfriend Barry, Streisand’s House Manager, James Brolin and ultimately Barbra herself.

Season subscriptions range encompass $203 for preview performances, $257 for Wednesday or Thursday evenings or Sunday matinees, $293 for Friday or Saturday evenings, and $297 for VIP Flexible/Anytime tickets for premium seats to any performance. Subscriptions for opening night celebrations are $453. Subscriptions for children 18 years and younger with a full paid adult subscription, and college students, are $123 (restrictions apply). ONSTAGE subscriptions (exclusively for young professionals 40 and under) are $135 and include a pre-show reception and ticket to every production during the third Wednesday performance of every run.

This entry was posted in News and tagged Actors’ Playhouse at the Miracle Mile, The Wick Theatre. Bookmark the permalink.