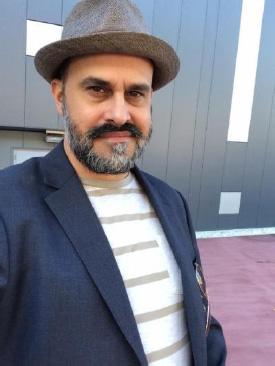 Ricky J. Martinez, artistic director for the New Theatre in Miami, has been named the recipient of the 2016 Margo Jones Award presented by The Ohio State University Libraries and OSU Arts and Humanities. The award honors those who have “demonstrated a significant impact, understanding and affirmation of the craft of playwriting, and who have encouraged the living theatre everywhere,” a news release stated.

The award will be presented at a ceremony April 30 at the South Miami-Dade Cultural Arts Center in Cutler Bay. Among the speakers at the ceremony will be Carol Cadby, a 30-year educator who teaches at George Mason University, Signature Theatre, Synetic Theatre, the D.C. Theatre Lab Conservatory and Arlington Public Schools, as well as William “Bill” Schwartz, a frequent actor at New Theatre.

In an e-mail, Martinez write, “I’m honored and thrilled to be not only receiving the Margo Jones award but to be the first Hispanic to receive it, it is… mind-blowing!  So grateful I can provide my theater community with another first through New Theatre and our risk-taking efforts with producing world premieres can be noticed on a national front. ”

Martinez became associate artistic director in 2005 and then artistic director the following year at New Theatre, a small acclaimed company started in 1986 by Rafael de Acha. Before that, he was a frequent actor in shows directed by de Acha. With managing director Eileen Suarez, he and the company have faced several challenges including three moves.

His lengthy resume includes directing at New Theatre and around the country, writing plays such as Roof which premieres next month at New Theatre, designing sets and choreographing shows.

He has earned a national reputation through his work developing new plays at New Theatre, but also as a member of the Executive Committee for the National New Play Network whose national conference New Theatre hosted this winter.

He also serves on the advisory board of the Latino Theatre Commons; has been a the National Endowment for the Arts panelist for seven years; and served on the Mid-Atlantic Arts Foundation; National Fund for New Musicals; PlayPenn, and San Antonio’s Luminaria Festival.

The Margo Jones Medal commemorates one of the pioneers of the American professional regional theatre movement who supported and nurtured new plays at the theatre she founded in Dallas in 1947.

“Edward Albee, Jane Alexander, Christopher Durang, Joseph Papp — and now our very own Ricky J. Martinez….” wrote New Theatre chairman Steven Eisenberg. “All we can say is ‘wow’ and shout it as loud as we can… And as you can see, Ricky has been added to some pretty amazing company.”

In an email, Eisenberg wrote, “New Theatre is immensely proud of Ricky’s accomplishment and this highly regarded recognition. This recognition confirms what we at New Theatre know to be true – that the national theatre community watches and respects the work that is done by Ricky and New Theatre right here in South Florida. Ricky has lovingly nurtured New Theatre for more than ten years and the New Theatre could not be more proud. We are so grateful that Ricky chose to stay in South Florida and impact our community.”