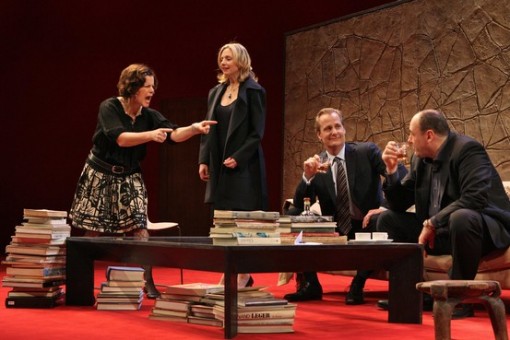 A major break has caused the Caldwell Theatre Company to scramble its planned season schedule.

The Boca Raton theater has secured the rights to be the first theater in the region to produce Broadway’s hit play,’God of Carnage.

Yasmina Reza’s four-character comedy about two couples arguing bitterly about their children was imported from London for a Broadway run that lasted from March 2009 until last June. It featured a succession of film actors, most with substantial stage credentials such as Jeff Daniels and some with meager ones such as James Gandolfini. It won the 2009 Tony Awards for Best Play, Best Director and Best Actress for Marcia Gay Harden.

Clybourne explores how property ownership is affected by race relations. It riffs on the potential sale in 1959 by a white couple to a black family ‘ the Youngers of Lorraine Hansberry’s A Raisin in the Sun. Then it fast-forwards 50 years when a similar sale sparks similar concerns.’Cholerton called it, ‘The best script I’ve read in 10 years.’

With the February show, Next Fall by Geoffrey Nauffts, and the season-opening reprise of the musical Vices, the Caldwell has a season comprised completely of work that is less than four years old.

And in related news, the Caldwell’s former artistic director Michael Hall is returning to direct Next Fall, a serious drama with a strong comic streak about a gay man who can’t get access to the hospital room of his lover who has been injured in an accident.