Posted on February 2, 2014 by Bill Hirschman 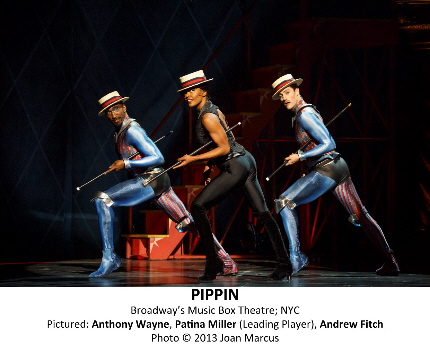 “Something old (sort of), something new” characterizes the 2014-2015 season for Broadway Across America-Fort Lauderdale. Two current Broadway hits, Pippin and Motown the Musical, will be joined be a refurbished The Phantom of the Opera, last season’s revival of Annie, an older revival of Anything Goes, and the unrefurbished but indestructible The Lion King.

The big draw occurs March 31–April 12 at the Broward Center for the Performing Arts: Pippin, the 1970 musical by Stephen Schwartz (Wicked) that was commandeered by director/choreographer Bob Fosse to produce a sardonic tale of a callow young man seeking meaning in his life.

Last season, eclectic director Diane Paulus (Hair and The Gershwin’s Porgy and Bess) reinvented the show with a circus motif. Instead of the traditional corps of strolling players headed in 1970 by the young Ben Vereen, she brought in a cast of Broadway veterans (including Miami’s Rachel Bay Jones) plus a troupe of tumblers, acrobats, clowns and Cirque-like performers. The score is especially beloved by Boomer-age theater fans who spent countless hours listening to the original cast album. A separate production is currently on view at Boca Raton Theatre Guild where it is drawing sell-out crowds.

The other headline is Motown the Musical (Feb. 24 – March 8), another jukebox revue, but one that has attracted overwhelming box office and audience buzz. Ostensibly, it tells the true story of Motown founder Berry Gordy, but critics lambasted the script. On the other hand, everyone including the critics were rapturous about the 60-plus songs covered by look-alike and sound-alike performers.

Noticeably absent from the Broward lineup but going out on the road elsewhere are current mainstem smashes, Kinky Boots and Newsies.

The season opens Oct. 7–19 with a road version of the recent Broadway revival of Annie which just closed a month ago in New York and had starred Miami’s Katie Finneran as Miss Hannigan, the poor put upon social service public servant abused by a bratty orphan and a fascist billionaire.   A separate version played at the Maltz Jupiter Theatre earlier this season.

The season continues Nov. 19-30 with Phantom, the show that opened the Broward Center 23 years ago and returned in 2000, 2005 and 2010. But just as he did with Les Misérables, mega-producer Cameron Mackintosh has pulled the 1986 warhorse back into the stable for a retooling by the same man who very effectively reworked Les Miz, Laurence Connor. The costumes are unchanged from designs by the late Maria Bjornson, but the show has new sets, lighting and choreography.

Kicking off the new year, Jan. 7–Feb. 1, is another familiar entry, Disney’s The Lion King, which actually is Julie Taymor’s The Lion King. Even if you’ve seen it before, the show still features the spectacular imaginative vision of the pre-Spiderman director Ms. Taymor including her breath-taking opening number, “The Circle Of Life.”

Closing out the season, May 5–17 is director Kathleen Marshall’s revival of Cole Porter’s Anything Goes which opened in New York with Sutton Foster in 2011 and went out on the road in 2012.

This entry was posted in News and tagged Annie, Broadway Across Fort Lauderdale, Broward Center for the Performing Arts, Motown the Musical, Pippin, The Lion King, The Phantom of the Opera. Bookmark the permalink.