Posted on November 8, 2022 by Bill Hirschman 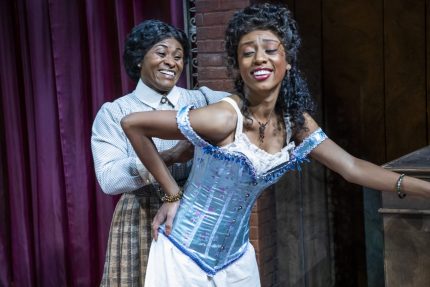 Rita Cole helps Krystal Mosley don one of the title garbs in Lynn Nottage’s Intimate apparel at Palm Beach Dramaworks, winner of the outstanding play award at the Carbonells

In at least 10 of the 20 competitive categories, the bronze egg-shaped statues were won by African-Americans, Latinx artists or productions centered on diverse cultural issues. Additionally, the inaugural Vinnette Carroll Award, named for the pioneering Black artist, was given for “significant achievement in advancing the cause of diversity, equality and inclusion.”

Diversity issues have been the focus of deep discussions among local performers and especially artistic directors who have pledged to be more aware in casting, season titles and other facets.

“Many of our winners are deserving and diverse,” board of directors president Gary Schweikhart told the crowd.

With artists dressed in brightly-colored tuxes and shimmering gowns, the marathon 3 1/2-hour ceremony marked the first live gathering for the awards since 2019.

The Outstanding Play award went to Palm Beach Dramaworks’ riveting Intimate Apparel, Lynn Nottage’s incisive exploration of nascent feminism, pride, class, the post-Civil War exodus to the north and a dozen other themes viewed through the prism of race at the turn of the century and its persisting repercussions in the present day.

Area Stage, the Rodaz family’s pioneering Miami company, earned four awards in connection with its completely reimagined staging of the musical Beauty and The Beast. Slow Burn Theatre Company based in Fort Lauderdale picked up three awards stemming from its musicals Head Over Heels, Kinky Boots and Matilda.

To read a complete list of Carbonell recipients, nominees and breakdowns by county, show and company click here.

The results reflected the first use of a significantly overhauled judging system meant to address concerns of theater leaders who complained about perceived shortcoming. But the new system – and some of Monday’s results — raised some murmured questions about whether it still needs changing.

Further, the initial list of nominees released nationally last month contained several errors that were corrected later including adding nominees – such as Jeni Hacker who won for outstanding supporting actress in a play.

Judging for the program went on official “hiatus” in November 2020 due to Covid shutting much if not all live theater on stage. Judging resumed in October last year. Shows that opened during the interim (going back to that January of 2020) were not in competition for an award, such as GableStage’s acclaimed production of The Price.

Miami New Drama’s Papá Cuatro resulted in awards for: Outstanding New Work for creator Juan Souki; Outstanding Lead Female Role in a Musical for Mariaca Semprún; Outstanding Sound Design for Javier Casas. Company Artistic Director Michel Hausmann told the crowd that the work was a recognition of the Venezuelan community in South Florida. ““We are representing not only Papá Cuatro, we are representing the six million Venezuelans who had to flee their country.”

Miami New Drama’s The Cuban Vote was home to Outstanding Supporting Actor Jonathan Nichols-Navarro as a sentient drunk turning into a persuasive politician, and Outstanding Achievement of an Artistic Specialty for Yuki Izumihara’s projection design.

The latter category was new. For years, judges have recommended to the board of directors to include such evolving theatrical elements as computer-animated projections being used increasingly in local productions. At the same time, the “ensemble” category was eliminated this year because neither previous judging committees nor companies ever agreed on exactly what qualified.

Area Stage’s Beauty and the Beast, which performed the musical around the audience seated at tables, scored Outstanding Director for a Musical for Giancarlo Rodaz, a young artist who has quickly built a reputation for reimagining classic works; Outstanding Supporting Actor for Imran Hylton who played both Belle’s father and Madame; and Outstanding Music Direction, Rick Kaydas. A large contingent of its performers, who performed a medley from the show, crowded the stage with the outstanding musical award which closed the very long program. 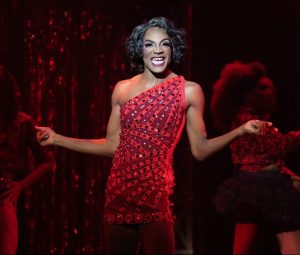 Slow Burn Theatre was the base for Elijah Word’s electrifying drag queen in Kinky Boots winning Actor in a Lead Male Role in a Musical; Mallory Newbrough as the nasty over-the-top mother in Matilda; and Lenora Nikitin for the outlandish fairy tale costumes in Head Over Heels.

Ronnie Larsen Presents’ work also provided the venue for two awards: Jeni Hacker took Outstanding Supporting Actress in a Play as the actress hired to play a lonely man’s mother in The Actors, and Oren Korenblum took the choreography award for the musical Come Out! Come Out!

The Maltz Jupiter Theatre produced the comedy I Hate Hamlet, which provided wins for visiting Broadway veteran Tom Hewitt as Actor in a Leading Role in a Play as the ghost of John Barrymore, and Natalie Cordone in the female leading role award as the kooky real estate agent. The production opened their season off-campus at The Benjamin School auditorium while their theater was under construction.

Island City Stages’ One in Two, a highly theatrical work about the persisting challenges of AIDs, resulted in a best director of a play award for Delicia Turner Sonnenberg.

+++ The George Abbott Awards for Outstanding Achievement in the Arts  — the program’s highest honor – was bestowed on internationally acclaimed composer and conductor Michael Tilson Thomas, cofounder and Artistic Director Laureate of the Miami Beach-based New World Symphony; and Barbara & Lawrence E. Stein, the founders of Actors’ Playhouse at the Miracle Theatre, Miami-Dade County’s premiere producer of large-scale musicals, which will celebrate its 35th season in 2022-23. 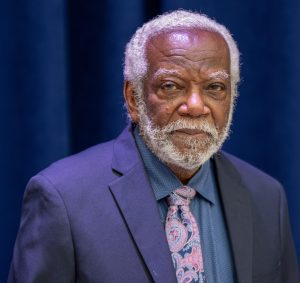 +++ The first Vinnette Carroll Award was given to Marshall L. Davis, who has served for 38 years as managing director of the African Heritage Cultural Arts Center in Miami’s Liberty City.

+++ Presentation of five additional special awards to theater and arts legends:
.         The Charlie Cinnamon Award to longtime newspaper/radio critic and Carbonell judge Hap Erstein.
.          The Ruth Foreman Award to actor, producer, director, poet and educator Teresa María Rojas, founder and director of Prometeo at Miami Dade College.
.          The Bill Hindman Award to Margot Moreland, one of South Florida’s best-known actors and a principal representative on the Council for Actors’ Equity Association for more than 20 years.
.          The Howard Kleinberg Award to playwright, dramaturg and co-founding artistic director of Lost Girls Theatre Andie Arthur, who is also executive director of the South Florida Theatre League.
.          The Bill Von Maurer Award for Theatrical Excellence to Theatre Lab, the professional resident company at Florida Atlantic University, whose mission is to “inspire, develop and produce new work, artists and audiences.” Artistic Director Matt Stabile said its work reflected a deep-seated commitment for theater to be part of a community and to help change it for the better.

+++ Presentation of Jack Zink Memorial Scholarships ($2,000 each) to Kaja Andric (Palm Beach County), Emily Taylor Kaufman (Broward), and Antony Ojeda (Miami-Dade). The scholarship program, funded in part by ticket sales to the event and fund-raising efforts is considered a major portion of the Carbonell Awards’ mission.

One reason for the program’s length was that every show nominated for musical and play received either a verbal description of the production by some of its artists, or a video of each show’s production numbers. Several award recipients spoke at great length. Further, meaning to honor theater workers who rarely get applause, nearly every award was preceded by several sentences recognizing some lesser known type of employee: ushers, bookkeepers, Covid compliance officers, musicians.

The evening also had a new venue: The Lauderhill Performing Arts Center in central Broward County, which among other facets, is larger than Amaturo Theater at the Broward Center where the program had been held for several years, and had free parking.

The show was emceed by actor Daniel Llaca; actor, singer and director Geoff Short, board president of the Pembroke Pines Theatre of the Performing Arts and board secretary of the Carbonell Awards; and Avery Sommers, award-winning Broadway, movie and TV veteran and cabaret headliner, and a new board member.

The evening started with a rousing parody of “Seventy-Six Trombones “(a/k/a 76 Great Shows) that combined Meredith Willson’s music with new lyrics by Hacker. Unfortunately, the sound quality was miserable (a common problem at the venue) and the lyrics were unintelligible. The ceremony also included performances from Beauty and the Beast and Come Out! Come Out!

The show was conceived by Fantel Music, including director/producer Caryl Fantel, a music director, vocal coach and pianist who has been part of the award show’s production team for 13 years In addition, Fantel led a 3-piece musical ensemble.

The Carbonell Awards are among the nation’s oldest regional arts awards and predate others, including Washington, D.C.’s Helen Hayes Awards. The awards are named after sculptor Manuel Carbonell, who designed the signature solid bronze and marble award.

The annual gala was slated for April 2021, but Covid forced the non-profit board to postpone the event until August 2021 when the ceremony was created online and broadcast over YouTube.

The awards overhauled its judging and calculation process during the height of the pandemic after strenuous complaints from theater producers, directors and artists,
some of whom had dropped out of the competition in protest.  During the pandemic, the board made changes to the structure of the award including injecting more diversity into the board and nominating panel.

Some people have cheered the changes as long overdue and others have questioned them as far as accuracy of process.

Now, in a one-tier system, judges are now assigned primarily — but not exclusively — to their home counties “thus maintaining the regional integrity of the awards,” a previous news release stated. But in essence, roughly two-thirds of the judges haven’t seen two-thirds of the eligible shows in competition, let alone whoever wins the category.

The precise process is outlined at https://tinyurl.com/4y6k8pu9.

The changeover alienated some judges and nominators who quit, but the Carbonells recruited several others including BIPOC members of the theater community, and still active artists.