Posted on December 4, 2012 by Bill Hirschman 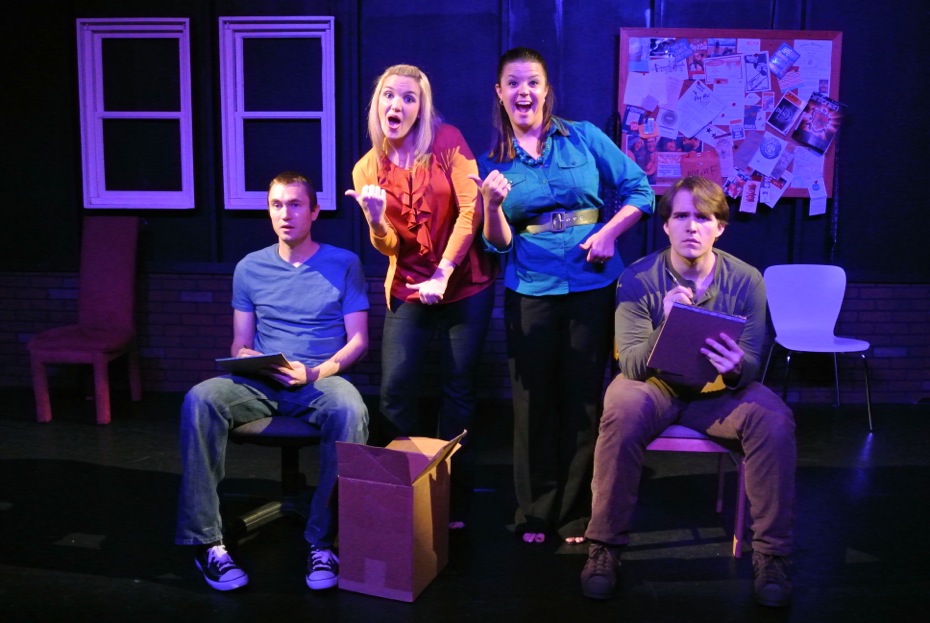 If you’ve ever kicked in the chorus line of a community theater production of Mame, you’ll likely adore Showtime Performing Arts Theatre’s [title of show]. But if you’ve ever secretly practiced a Tony Award acceptance speech in your bathroom, then [title of show]is a must-see.

Slathered with wit, imagination and a costume trunk full of inside baseball references, this tiny venture with only four actors, four chairs on a bare stage and an electric keyboard is arguably the most delightful musical comedy ever written by, about and for theater nerds.

A post-modern catchphrase that has become a paradigm, like the word paradigm, is the word “meta” which has come to mean an artistic effort that is self-referential. [title of show] is meta on steroids.

We follow two self-described nobodies Hunter Bell and Jeff Bowen as they struggle to write a show in three weeks to enter in the prestigious New York Musical Theater Festival. Then we observe them perform the winning result with two friends Heidi and Susan, then see the show get picked up for an Obie-winning run at the off-Broadway Vineyard Theatre, then watch them struggle not to make it overly-commercial when it heads for Broadway — all of which really happened to this specific show from 2004 to 2008 with the real Hunter, Jeff, Heidi and Susan playing themselves.

There are scores upon scores of Pirandellian fake-outs in which the show we’re seeing turns in on itself. At the end of a long scene, one character says, “We need to get rid of this scene because it feels lame,” and then the theater is plunged into a blackout.  Hunter later says his computer ate two hours of work. Jeff asks how far did he get. Hunter answers, “Here.” Abruptly, we’re on to the next scene. When they agree to cannibalize their planning process as a scene in the show, Jeff  the comic book geek says, “”So I can say ‘Wonder Woman for president’ and it’ll get in our show?” And of course, it just has.

Songs have titles like “Untitled Opening Number” and “Filling Out the Form Song” as the writers fill out the entry form for the festival. Unable to come up with a title, they just use the generic fill-in-the-blank placeholder on the form, [title of show].

Amazingly, this never gets precious, twee or tiresome. The material is priceless in its ingenuity and archness, but it benefits from a no-excuses production by Showtime, an eight-year-old Boca Raton company better known for its children’s theater conservatory.

This very adult production (laced with so much profanity that the script makes fun of it) features skilled performers whose enthusiasm is infectious: Clay Cartland as the bookwriter, Noah Levine as the composer, Sara Greenberg as an actress trying to balance the project with steady work as an understudy to the ensemble of The Little Mermaid, and Kristina Johnson, as the sassy actress who has nearly given up the life for the soul-sapping but remunerative career as a corporate office manager. All four are winning, but Cartland is especially noticeable for a manic look of Broadway glory in his eyes and scene-stealing bits like making the feral squeal of a Wookie.

The evening is smoothly helmed by director Beverly Blanchette, the former dean of theater at the Dreyfoos School of the Arts in West Palm Beach. Evan Ferrar works double-duty as musical director and the entire band. The show isn’t perfect; neither is the somewhat scruffy production. Notes get dropped; the singers occasionally run roughshod over the intricate musical meters. But the effort is so peppy and lovable that you can forgive it almost anything.

To have a good time, you don’t have to catch all the sideways references to Stephen Sondheim lyrics and other show trivia. Civilians will find [title of show] is a universally recognizable celebration of the humor, pain and joy of any creative process, not just theater. For instance, the song “Die Vampire Die” encapsulates the debilitating doubt that dogs any artistic spirit.

But you will enjoy it a lot more if you are enough of a Broadway geek to know (or able to intuit) that Shogun the Musical was one of the worst Broadway flops since Carrie.