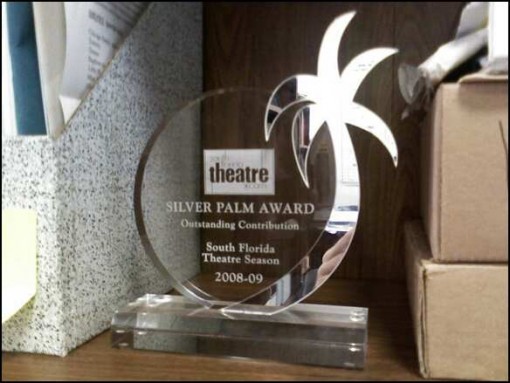 The third annual Silver Palm Awards were announced today, recognizing outstanding work during the season that just ended in shows presented by members of the South Florida Theatre League.

The 16 awards include the first husband and wife duo, Avi Hoffman and Laura Turnbull, and the first time the awards have recognized behind-the-scenes work in props and special effects.

The awards differ from the Carbonells in several ways. Awards often recognize sustained excellence for several performances during a season; the award cannot be given to previous winners; the categories can change from year to year as worthy contributions arise.

“The Silver Palm Awards are presented annually during the Festival to those who’ve made an outstanding contribution to the South Florida theater season,” explained Finstrom. “There are no nominees, no winners or losers, and no limit to the number of citations given in any ‘category,’ though there really are no official categories.”

The awards presentation will be at the Theatre League Festival’s closing party at 7 p.m. Monday, Oct. 25 at The Green Room (owned by Revolution Live) in Fort Lauderdale. Tickets for the public are $25, but Theatre League members attend free of charge. Call League Executive Director Andie Arthur for reservations at 954 – 557-0778.

This year’s Silver Palm recipients are:

Christopher Demos-Brown, playwright, for his outstanding new work When The Sun Shone Brighter at Florida Stage

Chrisso Ardito for outstanding choreography for Bubbling Brown Sugar, The Drowsy Chaperone and Mack & Mabel at Broward Stage Door, and Evil Dead, The Musical at The Promethean Theatre

Tim Connelly for outstanding set design for Blasted at GableStage

Taso Stavrakis for outstanding special effects for Evil Dead, The Musical at The Promethean Theatre

Tyler Smith for outstanding special props for Evil Dead, The Musical at The Promethean Theatre

Erin Joy Schmidt for her outstanding performances in Reasons To Be Pretty and Fifty Words at GableStage, Dying City at Mosaic Theatre and Summer Shorts / Undershorts at City Theatre

Nick Duckart for his outstanding performances in Farragut North at GableStage, Why Torture Is Wrong at Mosaic Theatre, Dr. Radio at Florida Stage, Secret Order at Caldwell Theatre and The Glass Menagerie at Broward Stage Door