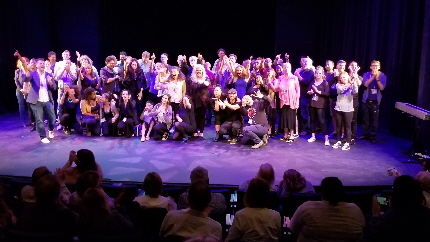 Theatre Lab, the professional resident company at Florida Atlantic University in Boca Raton, organized its second annual fundraiser using the tradition of staging a 24-hour marathon of theater-making. It was first used locally by Naked Stage’s founders Katherine and Antonio Amadeo in 2008 as The 24-Hour Theatre Project.

As in past years, the event is a major bonding-fest for local actors, playwrights, directors, designers and backstage crews who volunteer to write and produce a slate of short plays – mostly comic, some poignant. Some are well-known Equity performers who have worked here for decades, some are Carbonell winners and nominees, some are artists fresh out of college.

The group met Sunday night to assign pre-selected titles, directors and cast members. The playwrights penned through the night to match those requirements. Rehearsals (and rewrites) started the next morning. Designers and crews worked up sound, lights and minimal sets at FAU’s Studio One theater. At 7:30 p.m.  Monday, a nearly-full house of colleagues saw a procession of eight plays, most running about ten minutes long.

As usual, some were better than others; some were funny, some moving, several of them surreal and bizarre hoots. But the crowd laughed and cheered enthusiastically.

The Mystery of the $6 by Casey Dressler (who just closed her one-woman The Wedding Warrior) had three attendees at an “out there” contemplative retreat (Johnny Arena, Abby Nigro and Vaishnavi Sharma) becoming increasingly unnerved by the wild outbursts of Hebrew and animal imitations from their leader (Yafi Yair). Directed by Clayton Phillips and stage managed by Brooke Berger.

Asking Annie by prolific playwright Marj O’Neill-Butler was a relatively serious look at two co-workers (Rachel Finley and Robert Fritz) staging an intervention with Carlos Alayeto who may or may not be physically abused by his husband Matthew Korinko. Director Daimien J. Matherson of Measure for Measure Theatre, stage manager Vanessa McCloskey.

Selfies Are for Sharing by videographer Robert Goodrich was one of the strongest and funniest as celebs coke-sniffing David A. Hyland (who can only speak when he is being videoed for publicity by assistant Stephen Hedger) and over-indulged Katherine C. McDonald are wanting to adopt a child much like picking out a luxury car. Social worker Daryl Patrice is increasingly aghast. This one has potential, City Theatre. Director Timothy Mark Davis of New City Players, stage manager Vickie Joleen Anderson.

Massive Discrepancies by Alex Garcia has Patti Gardner, in one of the better performances of the night, as an insane woman, possibly being held because of some undisclosed crime. She is being questioned by a hospital administrator Angelina Lopez Cagledge and Randall Swinton, the brother of a missing patient she bonded with, Noah Levine. Director Daniel Eilola, artistic director of the Lake Worth Playhouse; stage manager Jameelah Bailey.

Visit His World by actor Alex Alvarez (just in White Plains) depicts Rachel O’Hara grieving for her brother who died of a drug overdose. A doctor (Michael Gioia) offers her a strange drug that takes her to limbo where Ryan Maloney and Frank Vomero may or may not be her brother. Director Patrick Fitzwater, co-founder of Slow Burn Theater Company, stage manager Rebecca Andros.

This entry was posted in News and tagged Overnight Theatre Project, Theatre Lab. Bookmark the permalink.