Tommy’s New Tune: A Musical About Studio 54 at U of Miami

Posted on November 9, 2011 by Bill Hirschman 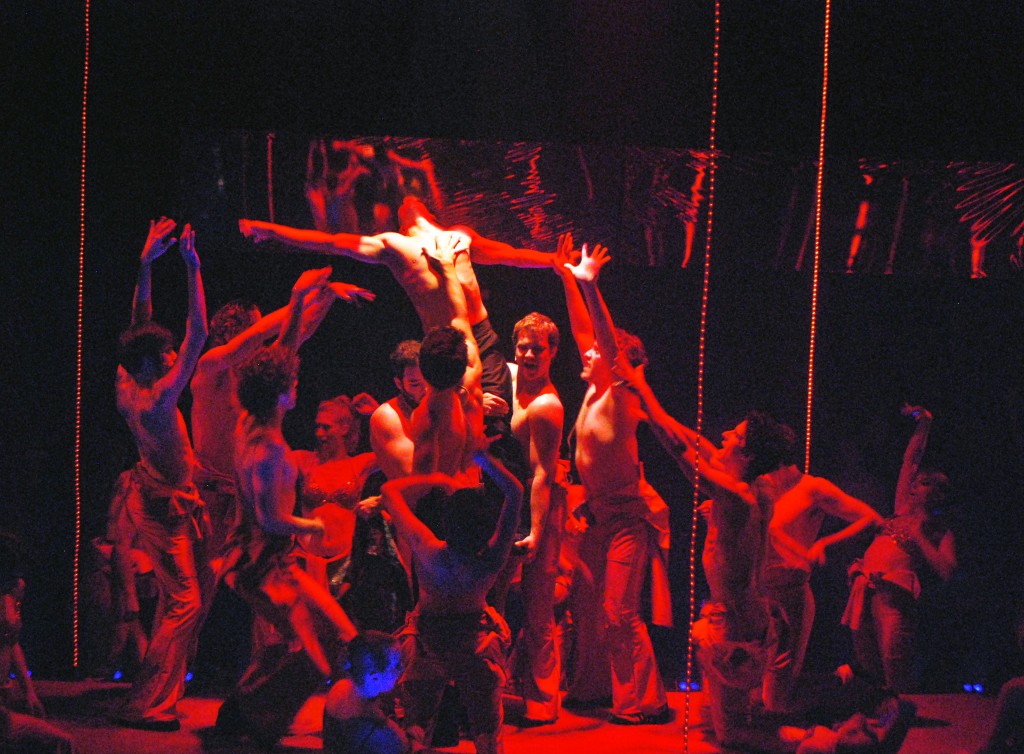 After a half-century in show business, dancer-director-choreographer Tommy Tune knows the gamut of pre-Broadway tryouts from New Haven shakedowns to Manhattan workshops to full stagings in regional theaters to lavish runs in Las Vegas.

But the process for 54 Forever that opens tonight is new for him. He is directing the world premiere musical at the University of Miami’s Jerry Herman Ring Theatre, cast with students and financed by the theater department.

Why try out a potential Broadway blockbuster in a modest college setting with 26 students who have never been in a professional production? 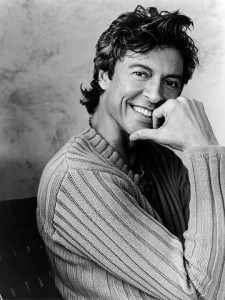 “The kids. The kids are the answer,” Tune said enthusiastically in that inimitable warm, effusive voice.

“They are so wonderful. They inspire me. Their enthusiasm, the readiness to try anything. They never say no. Their openness. Their brains are so fresh. They are so fast. I never have to say, ‘You know we changed that yesterday.’ ”

54 Forever is Tune’s very personal paean to the high-profile confluence of glitz and glamour of the late 1970s at the legendary Manhattan nightclub/disco Studio 54 overseen by entrepreneurial showman Steve Rubell.

Although Tune conceived and nurtured the idea based on his own affectionate recollections, the show is written by Mark Saltzman, best known as the writer of Tin Pan Alley Rag.

“It’s the defining pop institution,” Saltzman said in a telephone interview.  “It was a landmark that established the whole idea of celebrity as a powerful force. It’s the Big Bang of popular culture.”

Tune’s vision for the show is not a warts-and-all documentary; the club where the mega-stars who needed no second name (Liza, Halston, Bianca), the conspicuously wealthy and the demi-celebrities mixed was infamous for open sexual couplings and massive cocaine use. Instead, Tune wanted to recreate of the essence of the experience.

“I was there. It was very ethereal. This is a mash up of what I felt, the fun, the joy. I just want to take the audience for a ride. I just remember some of it. I imagined the rest. Because we’re not going for journalism.  It’s not important.”

Tune had a bit of difficulty describing the structure of the piece other than it focuses on his old friend and neighbor Rubell. The music for the 70-minute show relies on disco standards with the vocals removed to allow the actors to sing.  “Gloria Gaynor is our goddess,” Tune said of the singer of “I Will Survive.” Sometimes, the actors will sing a song as if it was a book number from a conventional Broadway show; other times they will simply accompany a song being played in the club. 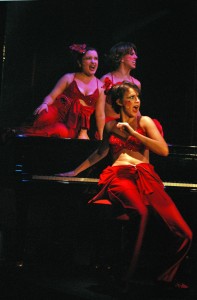 The sole original number is a lament by three girls from New Jersey who can’t get past the velvet rope where Rubell would cherry-pick who to admit. The number was written by Steven Cole (of the recent The Road to Qatar spoof at the York Theatre Company) and Jeffrey Saver.

The flexible Ring space is being adjusted so that it resembles a club not a theater.  Tune, who staged the musical Grand Hotel essentially with a bunch of chairs, is trying a similarly unusual idea: The audience will virtually surround a runway stage 43 feet long and 4 feet wide with some customers sitting on stage. 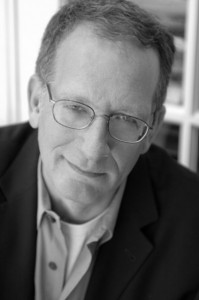 If it’s a slice to Tune, Saltzman sees it as an epic.

Saltzman, charged with creating a cohesive narrative, has a slightly more focused view of the story. “This is the rise and fall of Rubell and Studio 54. This was a guy who started with a crummy place in Queens. You see the whole thing build, and then crumble in one night. He lived this Greek tragedy of an arc.”

He noted that the heyday of Studio 54 was amazingly brief for the impact it had. “The legend is now in its third decade, but it only lasted 33 months.”

“There was something about Rubell; he was like a Broadway impresario. He was doing what David Merrick was doing. He gave you music, light, a show and stars. You just couldn’t go to a box office to get tickets. You got in and there was Liza Minnelli and Andy Warhol.”

The crumble occurred when federal agents raided the club in connection with the darker side of the club that Tune knowingly glosses over. Rubell, went to prison for tax evasion, developed substance abuse problems and died of AIDS-related complications in 1989.

While students are deeply involved in all aspects of the production, Tune and the university have brought in professionals to lead the teams. Long-time Tune associate David Warren Gibson serves as choreographer and co-director. Dona Granata, who has worked with Tune since A Day in Hollywood/ A Night in the Ukraine is the costumer. The lighting design is by Eric Haugen. The set is designed by professional Roger Hanna who is teaching at the school this year.

The connection with the university came through composer Eric Price, a former personal assistant to Saltzman who is currently an aide to another part-time Miami Beach resident, producer Hal Prince.

Price knew of Henry Fonte, the new department chair at the University of Miami, because Fonte had developed many new musicals in his former post as head of The Hartt School, the performing arts conservatory at the University of Hartford. When Price heard about the nascent project last fall, he hooked up the creators with Fonte.

They gathered last January for a 10-day workshop with the students, not necessarily expecting to do a public presentation but just to air it around a table. But the students’ embrace of the material excited Tune.

“Their brains work so fast. I say, ‘Do you remember Johnny Carson?’ They say, ‘No.’ And then they come back a few minutes later from their computers and they have Googled him and they know.”

The work coalesced so well, he said, that they mounted a staged reading of the 50-minute piece for students and school patrons.

Tune recalled, “They did say, ‘Our resources are limited. Please keep the cost down.’ ” 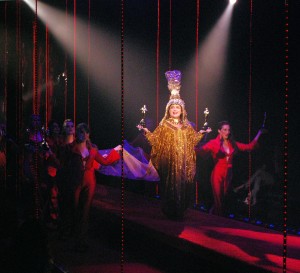 But the production values will be considerable, Fonte said. The costume shop built the wardrobe from scratch including 50 hats.

“We’re throwing everything we have at it,” Fonte said.

Using a university as a launching pad was unusual 15 years ago when Fonte first tried to get professional productions to try out in his Connecticut college. But since then, it has become a common technique, notably at SUNY Purchase, Northwestern University, the University of Michigan and other campuses.

“When I started, people wouldn’t return my calls. Now universities are being taken seriously,” Fonte said.

The process working with students is a little different, Tune said. “They’re carrying full class loads and they only get to rehearse for three hours a day, so now we’re in the 35th day of rehearsal. When they’re not rehearsing, they go to their computers to do homework, and when they’re called, they step right back in.”

That schedule also gives Tune, Saltzman and their creative team time during the day to retool the work.

Saltzman acknowledged that some of the decision to go to a campus is financial. “Economics have so much to do with it, but there’s something about how universities have stood up to do nuts and bolts theater productions instead of just having students study Moliere.”

Regardless of the venue, this production is a fully-staged backers’ audition, Tune said. He has invited numerous New York acquaintances to view the production to the community where he lives part-time.

Tune has been visiting Miami since the road tour of My One and Only came to town in 1985.

Now 72, he still remembers taking his 6-foot-7 frame for a stroll between shows one day. “In a few blocks, there was Ocean Drive: these hotels with Neco Wafer colors and all these old people sitting on porches looking out on the sea. Years later, I came back and found the old people were gone and there were all these Euro trash people and models and beautiful people.”

In 1999, he bought an apartment in South Beach. He rarely takes in local theater; he uses the hideaway as a retreat for his other love, painting.  “It’s quality of the light here, crystalline. There’s nothing like it. It affects everything you do,” he said.

But on this trip, Tune is focusing his efforts on recreating a time in his life when his own career was rocketing skyward and he could revel in the unassailable celebrity.

“It was wonderful. It was fantastic. It was a special time.” 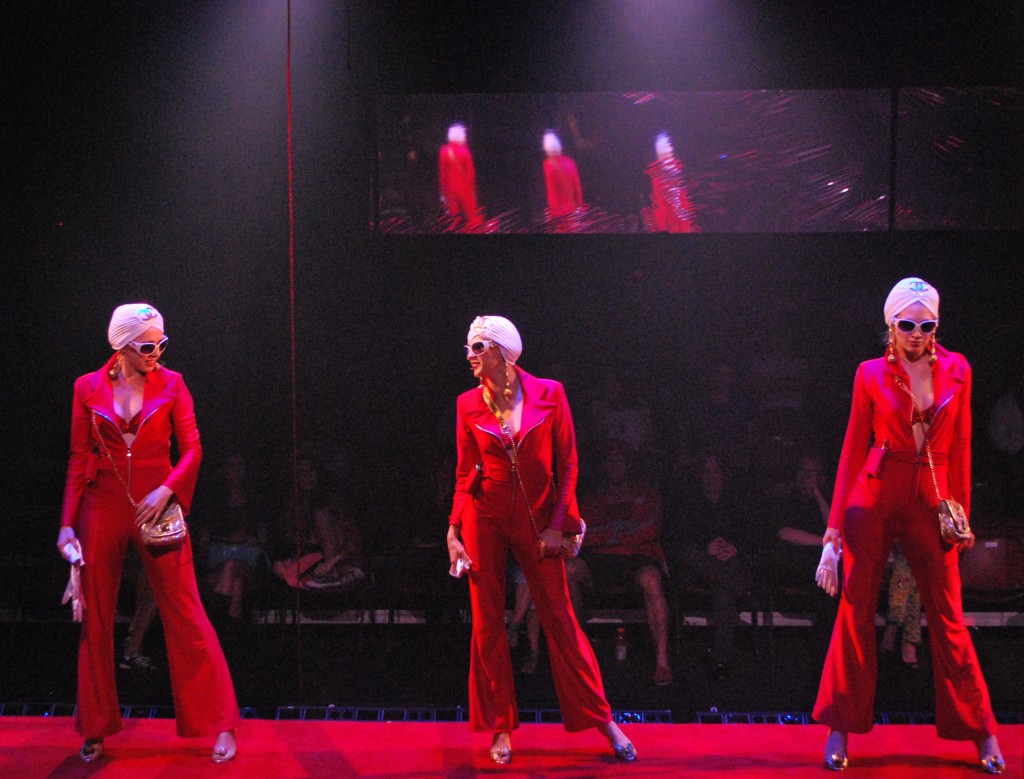 2 Responses to Tommy’s New Tune: A Musical About Studio 54 at U of Miami