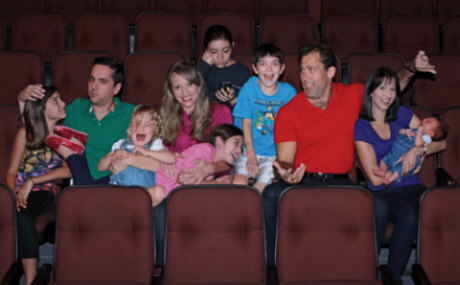 Henry Gainza, Amy Miller Brennan, Jim Ballard and Julie Kleiner cope with some extras who do not appear on stage in Rated P For Parenthood / Photo by Alberto Romeu

I was in such a rotten mood Friday night that cartoon thunderclouds circled overhead. Worse, I was en route to yet another generic “modern zeitgeist” musical with the unpromising title of Rated P For Parenthood.

But within minutes of the opening of Actors Playhouse’s sweet and silly vaudeville of skits and songs, I realized I was grinning, then chuckling and then laughing out loud.

The 90-minute hoot that bowed off-Broadway last year strings together almost 30 vignettes that chronologically trace the joys and absurdities of raising a child from conception to empty nesting.

All of them depend on the audience nodding wisely and saying, “we’ve been there,” which, of course, is the key to most theater from the paralyzing procrastination of Hamlet to the alienation of Elphaba.

This entry is a little stronger and more polished than most of these summer throwaways because the script by Sandy Rustin goes a step beyond the required scenes of teaching a kid to drive or facing a huge orthodonture bill. She throws some mildly inventive curve balls such as two gay dads trying to cope with their triplet sons simultaneously entering puberty by seeking out naked breasts on the Internet.

This slight topspin extends to the score, which includes a song with the admission “I’m In Lust With My Son’s Soccer Coach.” The music by Dan Lipton and David Rossmer is completely forgettable, but their lyrics with Rustin are somewhat witty. For instance, a mother trying to help her boy with his homework sings, “I’ve read The Grapes of Wrath / but my Ph.D. is useless when it comes to eighth grade math.”

Other segment are pretty predictable and not quite as funny. There’s two soccer dads awaiting meetings with their kids’ teachers, rapping a silly faux hip-hop song with the incessant refrain “Parent Teacher Conference / What’s up, dawg” and throwing gang signs. Some one-joke songs go on way too long: a father is wigging out while driving the kids to sleepaway camp, thinking about the imminent freedom to have sex with his wife later.

The material is contemporary with F-bombs, potty jokes, references to sexting and the parental challenge when condoms are handed out at school. Scene changes are often covered by large representations of I-phones on whose screens are projected droll exchanges between a mom and dad.

What makes this work at all is the enthusiastic, uninhibited performances by Amy Miller Brennan, Henry Gainza, Julie Kleiner and Jim Ballard playing a multitude of disparate characters under the inspired direction of David Arisco. All five have worked together before and their trapeze work here is enhanced by a palpable chemistry.

It’s not a surprise that Ballard, Kleiner and Gainza can be funny based on their past work such as Hairspray and The 25th Annual Putnam County Spelling Bee. But Brennan is best known for her gorgeous soprano in musicals like Oliver and Joseph and the Amazing You Know What, so it’s a revelation to see her strut her well-honed comedy chops. Her standout scene is when a nervous mother struggles to keep her aplomb while applying to pre-enroll her four-year-old in a tony private school. Faced with an unsmiling snob of a headmaster, Brennan tries not to fall apart in giggles when he asks if the boy has any strengths. Brennan says, “Well, he’s really good at Playdoh.” Her depiction of a mother realizing that this is not going to be a good fit is hilarious.

But these chameleons, all with wonderful voices, each has many moments to shine. Any parent or former teenager for that matter will recognize Ballard as the manly father trying to keep cool as his lovely daughter prepares to leave for prom night. Kleiner morphs effortlessly from a concerned parent in one scene to your standard rebellious teen a few seconds later. Gainza tries to sidestep explaining to his young daughter what was really going on when a friend saw “Dad doing push-ups on top of Mom.”

This piece is solidly in Arisco’s wheelhouse, making the most of decades of experience directing comedy. Civilians may not be able to identify precisely what Arisco does other than keep this intermissionless evening sliding by as smoothly as a baby’s bottom. But regular patrons of Actors Playhouse will recognize his style that blends in scores, probably of hundreds of little bits of comedy  — a tilt of the head, a double take, the timing of a line — that elevate the laugh level. His staging of the musical numbers is so fluid that you’ll look in vain for a choreographer’s credit in the program.

While Ellis Tillman’s costumes are just everyday outfits, the actors change their wardrobe in virtually every scene, often during  a few seconds while the band plays a segue. Gene Seyffer’s set features five blown-up covers from parenting magazines and a turntable that smoothly slides in furniture for each scene. The stage is lit by Patrick Tennent, the veteran of 50 Actors Playhouse productions who is moving to New York City.

Musical director Manny Schvartzman, who did similar duties for In The Heights and The Last Five Years, deftly leads a combo of Sandy Poltarack on guitar and Mark Annino on drums.

Don’t expect too much from the last show in the Playhouse’s 25th season.  It is no more than it wants to be: a less-than-challenging diversion. But it sure dispelled those thunderclouds.