Elf The Musical Is Sweeter Family Fare Than The Film 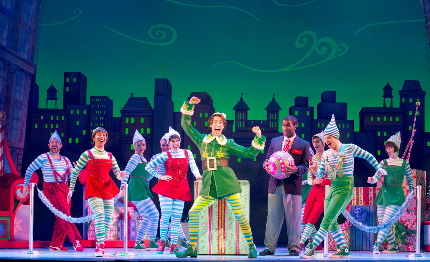 If you’re suffering from the holiday blues or you’re just holidayed out, Elf isn’t going to pull you out of it. But if you can pry open your sugar-clogged aorta just a smidge, this sweet peppy musical at the Arsht Center may generate a warm afterglow as Santa’s sleigh twinkles out of sight.

One warning, the tone is markedly different than the 2003 Will Ferrell film whose pre-sold title and basic premise the producers hope to cash in on. Some people have been lukewarm about the film, but far more people revere it as a “new classic” about a human Buddy who grows up a misfit in Santa’s domain and moves to NYC to find his birth father while reigniting a true holiday spirit among the jaded urbanites.

Managing expectations is the key to avoiding disappointment. Ferrell, film director Jon Favreau and screenwriter David Berenbaum made the first two-thirds of their tale a wry elbow in the ribs with broad frat boy humor such as a 12-second belch. Without mocking the holiday, in fact while honoring its bonhomie, these folks took nothing seriously and imbued the film with a subversive wink.

But this Broadway Across America national tour trotted out for two Broadway holiday seasons is meant as unapologetic family entertainment designed to delight toddlers and amuse their parents. A true Christmas miracle, it sidesteps the feeling that you are about to overdose on one-too-many chocolates from the Whitman sampler. Instead, it delivers a genuinely cute, charming, cheery, chirpy (add your own C-adjectives) confection. But a lot of people have had enough of that for a little while and are going to be underwhelmed post-New Year’s Eve.

Furthermore, no one can or should or does try to replicate the carefully tailored characterization of Saturday Night Live alumni Will Ferrell, an indisputably gifted character comedian. He and Favreau wanted the audience to know that they were ribbing Buddy’s naivete as the iconic duck out of water in The Big Apple.

So that means any stage play must have a supremely charming lead, not a Ferrell clone, but someone with an instant likeability and their own persona. Enter Matt Kopec, a veteran of earlier Elf tours, who succeeds in creating his own Buddy, an innocent you want to protect rather than a naif you make fun of. Gone is any shred of Ferrell’s buffoonery. Kopec is physically different: thin and limber with a face graced by a huge Broadway hoofer’s grin and eyes squeezed into a squint of joy. He’s probably tired of hearing this but he reminds you of a tall Martin Short.

The plot mirrors that of the film with a few changes: Buddy was abandoned at an orphanage and wandered into Santa’s sack one Christmas Eve. He crawls out at the North Pole and grows into the largest elf anyone has ever seen. But upon learning at age 28 that he is actually human and finding himself inept at toy making, he goes to New York City to find his birth father who does not know he exists.

Dad is Walter Hobbs, a curmudgeonly soul absorbed in publishing children’s books. Like most New Yorkers including Walter’s 12-year-old son Michael, he has lost the true Christmas spirit. Buddy is obviously no better suited for urban life and Walter is not sure what to do with a grown son who insists he’s been an elf for nearly three decades. Of course, Buddy goes to work for a department store Santaland where he falls in love with classically disaffected coworker Jovie. But finally finds a way to win over his new family, Jovie and most of New York on a Christmas Eve when Santa’s sleigh crashes into Central Park because no one in the tri-state area believes in him.

The musical’s script was written by two pros at sentiment instead of sentimentality, Bob Martin (The Drowsy Chaperone and Slings & Arrows) and elder statesman Thomas Meehan (The Producers, Hairspray, Annie, you name it.) The score is by Matthew Sklar and Chad Beguelin whose primary credit is the similarly goofy The Wedding Singer.  As a result, the script is dappled with funny verbal and cultural jokes absent from the film, such as Santa using an Ipad for his venerable list of who’s naughty or nice, or Santa having given up the flying reindeer “because of PETA.” As far as the score, you won’t remember any of the tunes and lyrics ten minutes after the curtain falls, but they are appropriately jaunty and jingly (and in this nine-member pit, cyber-enhanced to give a very full sound).

Martin and Meehan have added several scenes of their own such as a Chinese restaurant providing recently unemployed Santas a free dinner. But I do miss the finale of the film in which Buddy’s jaundiced girlfriend gingerly begins singing “Santa Claus Is Coming To Town” to rev up the holiday spirit among her fellow New Yorkers and thereby power Santa’s sleigh. The use of the familiar song touched something in the film audience and its original substitute here doesn’t have the same emotional punch.

At 2 hours and 40 minutes including intermission, Elf does run a bit long given the material, much of it due to production numbers that are delightful but often unnecessary plot-wise.

The whole thing is imaginatively staged and choreographed (especially having the elf actors dance on their knees), and has a whimsical set, costume and lighting designs that are mélange of gingerbread house and Popsicle colors. We always complain about the sound quality at the presenting houses in the region, so kudos to whoever was responsible for such clear clarion sound.

The rest of cast is unassailably solid, several being veterans of earlier tours. I did miss Favreau’s brilliant casting of Ed “I hate spunk” Asner as Santa Claus, the quirkily appealing Zooey Deschanel as the spiky love interest, and James “Sonny Coreleone” Caan as the believably misanthropic father. But praise is due here to Tyler Altomari as Michael, a believable teenager with a belter’s voice; the lovely Kate Hennies as Jovie; Gordon Gray as a jolly but droll Santa, and Matthew Alan Smith who somehow makes Walter’s conversion credible.

Odds and ends in the stocking: A second tour is in Washington, D.C., with South Florida’s Ken Clement as Santa Claus (a role he has played in a different show at Actors’ Playhouse). Ken sent a message reminding local audiences that Mara Gabrielle, the ensemble actress who played Deb the office aide on opening night here, also played Mabel Norman in Broward Stage Door’s Carbonell-winning Mack and Mabel opposite Shane Tanner and the aforementioned Mr. Clement.

To see promotional videos of the show, click here http://www.elftour.com/video-gallery