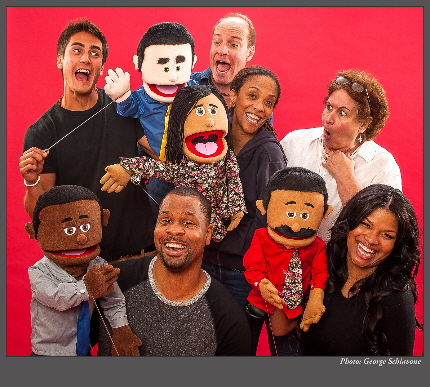 A nervous air passenger drives an off-duty pilot crazy with her worry about crashing, a Haitian immigrant wrestles with the cost of assimilation, a loving couple is depicted at two stages of their relationship – simultaneously, the new management of a previously buttoned down company seems to prefer employees who are puppets – literally.

Intriguing premises are the jumping off points for the nine flights of theatrical whimsy in City Theatre’s annual festival of short plays, Summer Shorts. While no discernable thread runs through the disparate works, the deftly comic playlets are shot through with a striation of poignancy, and the moving entries are leavened with flashes of humor.

Although the evening encompasses the work of multiple playwrights, four directors and a repertory cast of six chameleons, the evening has a unified tone of warmth and polish.

This is no mean feat; most short play festivals around Florida and the country have at least one or two mediocrities and one what-were-they-thinking choices that looked better on paper than on the boards. But continuing an upward trend during Producing Artistic Director John Manzelli’s leadership, this unusually consistent production scores as arguably the best written, produced and acted entry in the festival’s 20-year run.

Every last one elicited laughs and/or moistening tear ducts, and each playwright’s work had a well-constructed narrative arc with a beginning, middle and an end. That’s not to be taken for granted. They are short plays, not the sloppily and lazily tossed together one-joke skits that dominate Saturday Night Live or your kid’s summer camp production or, in fact, most short play collections we’ve seen.

A Summer Shorts hallmark, regardless of and sometimes in spite of the writing, has always been the quality of the acting, directing and production values. This year’s rendition ratchets up the bar yet again. The cast includes Shorts veterans Elizabeth Dimon and Tom Wahl, newcomers and recent college grads Michael Uribe (just off The Little Dog Laughed) and Chasity Hart, plus Miami dramatic actor Bechir Sylvain returning from the West Coast and the absolute standout Karen Stephens who has been wowing local audiences for decades but never been in a Shorts production before. What marks their performances, Stephens and Dimon especially, is how completely they inhabit their diverse characters. Only fellow professionals will appreciate how completely these six actors are immersed in their performances. Most people will just accept them no matter how silly or profound the premise of each piece. It should be noted that in the environment of multi-ethnic Miami, the color-blind and cross-cultural casting within playlets is so ubiquitous that it’s not even acknowledged as anything unusual.

Some of the fine acting obviously is due to the direction of some of the best hands in the region including Manzelli, Margaret M. Ledford, Paul Tei and, for the first time here, Sylvain.

Cougar by Holli Harms, directed by Manzelli, depicts Kate, a middle-aged woman (Stephens) in a bar awaiting a meeting with her lover, a mature poet. But she is approached by his handsome son (Uribe) with the news that he has died. But inspired by the father’s writing about Kate, the young man ardently pursues Kate for himself while the bar’s acerbic denizen (Dimon) looks askance. Kate has to decide what to do about these romantic advances from someone who she tells, “I have clothes older than you.”

Let’s Get Physical by Kelly Younger, directed by Tei, portrays an airline co-pilot (Wahl) getting his annual clearance physical from his doctor Sylvain. But Sylvain discovers that Wahl is successfully dating Hart, a potential member of the doctor’s practice who has rebuffed his advances. Sylvain tries to sabotage the romance by ensuring that Hart knows all of Wahl’s ailments. Among Tei’s inspired bits is that Sylvain is seated in a rolling chair and rolls noisely all around the stage rather than walks.

Flare by Edith Freni, directed by Ledford, seats that nervous flyer Dimon alongside an off duty pilot (Wahl again). Not only can he not calm her, but he gets pretty steamed until certain facts come out including a shared interest in baseball. Like much of the evening, the pacing and the delivery of the dialogue is carefully crafted to be naturalistic yet terribly funny. A shout out to sound designer Matt Corey for the procession of ominous bumps and unnerving squeals that upset Dimon.

Risen From The Dough by France-Luce Benson, directed by Sylvain, won City Theatre’s national playwriting competition. Rightfully so. Maryse (Stephens) and her sister Leonide (Hart) emigrated to Miami from Haiti several years ago after Maryse’s husband Fritz made a modest beachhead for them. They struggled until she could open a Haitian bakery, but then he was murdered by street toughs. The embittered Mayse nurtures a profound anger against America and especially against assimilating. She has contempt for all of Miami’s ethnic groups, even African-Americans, who see Haitians as the lowest rung of the societal chain. The play takes place as the sisters await the arrival of a health inspector. How Maryse’s attitude softens on the eve of the anniversary of Fritz’s murder is a heart-rending and uplifting ode to the resilience of the human spirit.

Human Resources by R. Eric Thomas, directed by Manzelli, is the wackiest of the comedies as a technology firm whose corporate ethos is overrun after a merger with a company that seems to favor furry felt puppets as new hires. Once again, Corey provides a soundscape of splats and beeps normally found in a Saturday morning cartoon.

Bedtime by the acclaimed if mysterious playwright Jane Martin, directed by Ledford, is a gentle and poignant relationship play. It takes a minute or two to figure out what’s happening, but when you get it, Bedtime proves a lovely and touching piece. A young couple named Claire and Joseph (Hart and Uribe) are preparing for bed. In the same room, in the same bed, at the same time, is a middle-aged couple preparing for bed, also called Claire and Joseph (Stephens and Wahl). In fact, no spoiler here, they are the same people at different stages in their relationship, and the juxtaposition of the two says volumes about how we deal with the people we love at different stages of life. Martin and Ledford have an especially deft touch bringing out the heart of relationships. A nod goes whoever came up with the inspired stroke of having the older Claire wear a faded version of the same brand-new college T-shirt that the younger Claire is wearing.

Mandate by Kelly Younger again, directed by Manzelli, is a cute frippery in which an irrepressible stay-at-home dad Uribe and a stay-in-his-cubicle accountant Sylvain have been matched up by their wives in a “man-date” with the hope that they can become as close as their women have. The meet in a sports bar of this modern day odd couple seems destined to have no hope for a bromance. At first.

The Anthropology Section by Patricia Cotter, directed by Ledford. Tessa (Stephens) has a chance meeting with her former lover Marion (Dimon) in the anthropology section of a bookstore. Tessa announces that she has just gotten married to another woman, which leads both to examine their past relationship. As with the central character in Daniel’s Husband playing at Island Stage right now, Marion not only doesn’t see the need to be married but treasures her being outsider status as a lesbian.

Mrs. Evelyn Foxy & Her Low Orbit Anxiety, commissioned by the company from returning playwright Steve Yockey, directed by Tei, is a farce about a seemingly dotty mother (Dimon) who sort of kidnaps a polltaker (Sylvain) because she is afraid that debris from space satellites will fall and kill people, to the consternation of her daughter (Hart) and a young visitor (Uribe).

The plays may be 10 or 15 minutes long, but no one scrimps on the production values, especially the lighting by Preston Bircher, peerless sound by Matt Corey, character-revealing costumes by Ellis Tillman, nimble set design by Jodi Dellaventura, even the props by Florencia Ancewicz.

This production in the Arsht Center with its sophisticated resources marks a long journey from 20 years ago when Shorts was held at the University of Miami’s Ring Theatre – two full alternating schedules of plays, which could be seen if you liked on one day with a picnic lunch provided between shows.

Since being created by Susan Westfall (still with the company), Stephanie Norman and Elena Wohl, the program has given world or regional premieres to hundreds upon hundreds of plays by novices and some of the best known playwrights in the country. (To see the list, click here http://citytheatre.com/pages/?page_id=1446). While the quality of the writing varied, the acting and direction were consistently faultless and provided employment to scores and scores of local professionals.

Now, City Theatre has grown into a year-round nationally-recognized program that includes Shorts For Kids called S4K this year (this year June 17-28 at the Arsht), Short Cuts which tours schools in the winter, the slightly more adult Shorts Gone Wild (August 6-Sept. 6 at Empire Stage in Fort Lauderdale and Sept. 10-13 at the Fillmore Miami Beach), testing works out in public readings during the year, and finally, the fifth annual acclaimed Citywrights professional development conference for playwrights (June 25-28) with keynote speaker this year, Pulitzer Prize winner Marsha Norman (‘night Mother).

The arc of that history is recognized in the current edition by a proscenium made up of photos from past productions and with wry videos hosted by Manzelli including a short funny bit from Steve Trovillion, the shape-shifting star of many past Shorts productions but who has been unable to participate in recent years because of teaching duties out of state.

(Full disclosure: Stephens and I are among the co-hosts on Iris Acker’s weekly program on BECON-TV Spotlight on the Arts.)