A Hilarious God Sits Down To Explain It All To You, Sort Of 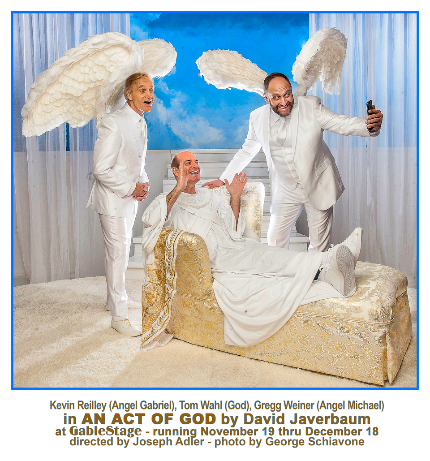 God is just like you and me – genial, well-meaning, chatty and, while omniscient and omnipotent, also flawed enough to make universe-shaking mistakes.

At least that’s the God that actor Tom Wahl, director Joe Adler and playwright David Javerbaum offer during a delightful, hilarious and subversively insightful evening in GableStage’s An Act of God.

He admits to the audience and his accompanying angels Mike (Kevin Reilley) and Gabe (Gregg Weiner) that he originally planned to put fish in the sky and birds in the sea, and then, hey, he just reversed it on a lark at the last minute, making the idea of a “fish out of water” all the funnier to him.

Reflecting on Creation, he says one of his favorite tasks was creating the land, especially shaping Florida in the shape of a penis.

While this sounds irreverent, it’s also a stealthy investigation into the symbiosis between Mankind and God, including some droll but telling runs at the “big” questions. Sometimes the answers are flip as if God was a mischievous scamp: “Bad things happen to good people to even out that good things happen to bad people.” Sometimes they posit a God who admits that being all-knowing and all-seeing is not a guarantee against incompetence or just checking out sometimes.

Referencing the film, he gives an example, “The Sixth Sense? I did not see that coming – and I see dead people all the time.”

This never stops being a hoot, but what emerges is the sense that whether you believe God created Man or Man created God, in either case, each created the other in their own image. And when you consider that gem from all angles as Javerbaum does, you walk out of An Act of God with something to chew on hours and days later.

The premise is that an expansive cheery God sits down with the audience in his Heavenly abode for a coffee klatch, although the fiction is intentionally punctured frequently such as Wahl acknowledging to the audience that this tall bald guy before them is really Tom Wahl, “the Carbonell-winning, Silver Palm receiving actor.”

God is here to let us know that he has grown weary of the Ten Commandments “the way Don McLean grew weary of American Pie.” He’s here with a couple of marble tablets taken from a Tulsa courthouse to unveil a revised set of Ten Commandments that expand and clarify on the original dicta.

This God tries out ideas and then revises them: Adam and Eve were initially Adam and Steve until that didn’t work as planned. He created 4,000 different beetles because he was trying to get it perfect once.

Even at a breezy 70 minutes, the evening drags just a bit about two-thirds of the way in, through no fault of the indefatigable Wahl or the master of pacing Adler. It’s just that Javerbaum has fully explored his comic premise with the same riffs and we get it; we got it.

But just then, the play veers a left turn into the intellectually engaging territory that likely attracted Adler. It’s still funny, but the more serious reason Javerbaum wrote this in the first place begins to peek out from under the humor.

Theologians long have been fascinated by the demanding, vengeful “personality” of the Old Testament God “maturing” into the compassionate forgiving New Testament God.  As this incarnation’s eternal being admits sheepishly, “I have wrath management issues.”

As God describes, with amazement bordering on disbelief, Abraham’s willingness to sacrifice his beloved son because he loves the Lord more, we see God unnerved that he asked for proof like a jealous lover. Then he gives a droll account of the Job story, which only underscores this concept of an all too human deity.

But the turning point is his retelling of the inside story of Jesus as if God was a father trying to understand the new ideas of a son wanting to change the world. Without spoiling anything, the beauty of the section is how God seems surprised that he is learning from his son. It ends with a gorgeous realization we won’t spoil but that will resonate with open-minded parents.

As good as the script may be and Joe Adler’s detailed execution of it, the show would not work without a special actor in the title role. Wahl does not mimic his predecessors Jim Parsons or Sean Hayes, although his Divine Being has the same vibe.

But winning and keeping an audience all evening is a major challenge and Wahl expertly delivers the energy, comic timing and charm to keep the audience enthused even when the play itself begins to falter. He and Adler often have God leaning back on his lounge chair, but Wahl is rarely stationary. His arms, his legs, his hands, his entire body are almost always switching positions with every one-liner.

Infrequent theatergoers won’t appreciate Wahl’s amazing range. Not even a week ago, he was stunning audiences in Zoetic Stage’s After as a father struggling against the idea that his parenting was at fault in horrific acts by his son, ending in a wordless scene of internal agony. Then there was his Carbonell-honored turn as Charlotte von Mahlsdorf and 40 others character’s in the one-man I Am My Own Wife at Zoetic, or the grieving father in Summer Shorts’ Tornado a few years ago.

Javerbaum has a long and varied resume writing books and songs, including the musical Cry-Baby. But on point here, he was a writer for David Letterman, and directly on point, as a head writer on The Daily Show with Jon Stewart. You can hear in this script that voice, those rhythms and that irreverent but serious brand of humor that dominated The Daily Show. Still, much of the material originated on a Twitter account he manages. Some of the humor is satirical, some of it insightful, some of it silly enough to actually summon up a prerecorded rimshot. The script also has been retrofitted with local references and topical nods to GableStage’s plans to move to the Coconut Grove Playhouse.

Lyle Baskin’s set is a hoot in itself: a white, white, white chamber with chiffon curtains exposing a gorgeous skyscape, Roman columns, plush rug, two large marble tablets for the new commandments and a chaise lounge all white with gold leaf. Ellis Tillman dresses God in a flowing toga with gold accents.

It’s hard to tell if the show has a satisfying ending when God and the angels sing a cute number because the microphones and sound system failed opening night. But Javerbaum and his writing partner Adam Schlesinger have a pretty good track record in penning these numbers, so we’ll take it on faith.

Still, the imaginative and witty denouement emphasizes the idea that we have spent too many millennia relying on Him to solve problems of our own making and urges us to take responsibility for our actions and our world.