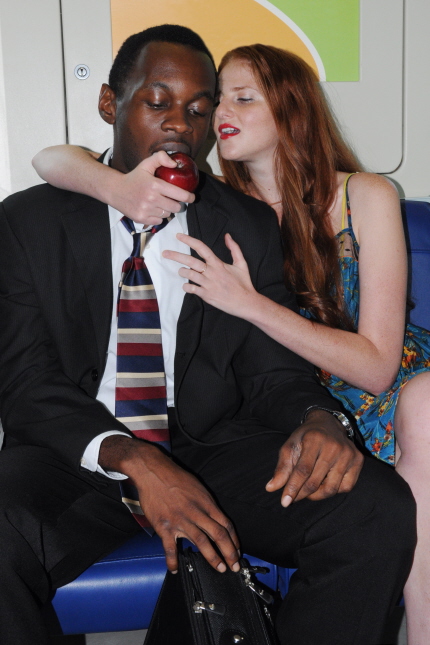 Among several metaphorical signs surrounding the stage set of a subway car in the AAPACT production of Dutchman is one that reads “”High Voltage! Keep Off!”

You’ve been warned: The script of Amiri Bakara’s classic 1964 play of racial and sexual politics crackles with the explosive rage that Langston Hughes’ predicted in “A Dream Deferred.”

The fact that this production doesn’t find that passion or electricity until two-thirds of the way through the 40-minute play doesn’t prevent the audience from appreciating Bakara’s themes or enjoying the laudable aspirations of the ambitious production directed by Teddy Harrell Jr., founder of the African American Performing Arts Community Theatre.

And once the too languorous plot takes its key turn, the production barrels like a subway that has lost its brakes. It just takes a long while for this train to leave the station.

Dutchman opens as mild-mannered young businessman, Clay (Samuel Umoh), boards an empty subway car. He is buttoned-down in a conservative suit and haircut, a black man of the 1960s trying to assimilate into white culture. A provocatively dressed white woman, Lula (Yevgeniya Kats) enters and teases Clay in an extended seduction. He resists her to begin with, but eventually he begins to respond with his own muted overtures.

In what seems to be an artistic fantasia rather than reality, Lula she keeps mocking him for being a passive wannabe white man. When she coarsely suggests they have sex in the subway car, now crowded with other passengers, he slaps her and launches into a long powerful aria about racism and the resulting fury it engenders. Lula cannot allow that defiance to stand and she brings the play to a close with a violent tragedy.

Dutchman is very much a play of its time. Urban black artists in the throes of the civil rights struggle were articulating their anger in expressionistic art rather than through the Establishment’s taste for naturalism. It owes more to the free verse of Beat poetry than the verities of the well-made play. Dutchman also was among the last works that Bakara wrote and published under his birth name LeRoi Jones, which indicates how it fit in that watershed time of African-American identity.

This is crucial in explaining why this production – which seems set in an Everytime – doesn’t quite work for the first two-thirds of the piece. Dutchman’s initial dramatic tension relies heavily on the potential of fatal fallout in 1964 if a black man was seen in public enjoying sexually-laced interaction with a white woman regardless of who initiated the contact. That does not come across here at all. Clay seems almost bemused and bothered by Lula’s attentions as a 21st Century male might, instead of being anxious, intimidated or downright scared.

When Clay finally gets angry, the time and place click in, even though his sentiments remain as relevant today as they were 48 years ago. Clay’s monologue is a brilliant piece of writing that articulates the roiling rage that many African-Americans were afraid to acknowledge publically, and it communicated to liberal white audiences the extent of anger later to be echoed by Eldridge Cleaver and Malcolm X.

One passage warns that white people “sit there talking about the tortured genius of Charlie Parker. Bird would’ve played not a note of music if he just walked up to East Sixty-Seventh Street and killed the first ten white people he saw. Not a note.”

Whether Bakara meant to or not, the piece also exposes the equally benighted sexual and gender stereotypical roles of men and women.

Harrell has Umoh, a 2008 Barry University theater grad, play the first section as someone too laid back rather than someone carefully controlling his emotions. But when Bakara gives him that monologue, Umoh justifies his casting with a blistering performance accented with flashing eyes and an anguished voice.

Kats, who has worked at PlayGround Theatre among other places, plays Lula like the slinky siren that Bakara imagined in a low cut cocktail dress and cascading red tresses. Kats makes Lula’s slightly unhinged actions believable, like a drunken party girl self-destructively testing the boundaries of what society will allow. She also puts across the underlying contempt and arrogance of a white person confident that she can toy with any black person. Munching on and tossing away half-eaten apples, Kats makes a convincing Eve luring Adam to his doom.

If the production is flawed, AAPACT deserves praise for courageously delivering a play that few other companies would even dream of chancing.

For the credits geeks: The play originally starred Robert Hooks and Jennifer West. The work was filmed in 1967 with the late Al Freeman Jr. and Shirley Knight, and was revived on stage in New York in 2007 with Dulé Hill. (The West Wing and Psych) and Jennifer Mudge (The 39 Steps).

One Response to AAPACT Dutchman Starts Too Slowly; Finishes In Blazing Anger