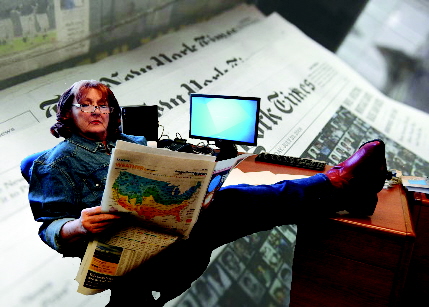 As the season heats up once again, we enter a period with many openings in the same week and many throuighout the month, as well as announcements of next season’s schedules. That means reviews will only be in the top four positions for four or five days or less. To see earlier reviews, check out the red ribbon at the bottom of the page entitled “Reviews” or click the “Reviews” button in the white on teal strip at the top of the page.

There are more than a few reasons to see The Women’s Theatre Project’s Red Hot Patriot — first among them is four-time Carbonell Award-winner and local actress Barbara Bradshaw as she holds court for 68 minutes in a one-woman show about Texas journalist Molly Ivins. Secondly is to see Genie Croft’s brilliant direction.

There are so many strong links that hold this production together, but the least inviting is Margaret Engel and Allison Engel’s cobbled together script. The twin sisters, both with journalism backgrounds, had never written a play before they tackled Ivins’ life story to turn it into a biographical play.

They have been quoted as saying they wanted to keep the Texas firebrand’s memory alive in some way after she died of breast cancer in 2007 at age 62. Yes, that they do. But it’s Bradshaw and Croft’s tooling that puts the kick in Ivins’ wit since theatrically the Engels’ sisters’ monologue doesn’t quite hang together. Its flaw is its choppy transparency due to its dependence on the source material. It pulls from the writer’s columns, speeches and interviews (some of which live on You Tube). The script, while efficient as a consumer magazine article, is constructed more like a journalist’s play-by-play than a from-the-heart account of a storied career filled with trailblazing, busting through the glass ceiling of newspaper’s male brotherhood, personal heartbreak, family strife, illness, loss and alcoholism.

We meet Ivins, best known for her satirical newspaper columns and articles for The Texas Observer, The Dallas Times Herald, The New York Times, and as a contributor on CBS’s 60 Minutes, as she’s wracking her brain to write a column about her father — neither are fans of each other.

The story is Texas-centric and for those who followed the land of oil’s politics, it will be easy to keep up. However, while there are some relatable universal themes among Ivins’ liberal radicalism, much of the story talks about the newspaper reporter’s stints in Texas – blocks of time being spent on her being one of the first women to cover the Texas “Lege” in Austin. “Can you believe God gave me all this material for free?”  It would matter if the names she drops made a difference to those outside of Texas politico circles in the late 90s.

There is some true blue skewering of George W. Bush, who she nicknamed Shrub. Not surprisingly this is some of the liveliest dialogue, no doubt because there was much material for the sister writers here since Ivins co-authored two books about about the nation’s 43rd president. The first was titled, Shrub: The Short but Happy Political Life of George W. Bush, which was released in 2000, and the second was Bushwhacked  in 2003.

The Engels also take us through a tour of the late 20th century newsroom and for those who were newspaper journalists, it does bring back some nostalgia. For the laypeople in the audience, this portion of the program will feel like a field trip. It was a time when reporters visited the hallowed “morgue,” basically a newspaper’s library that held clippings galore and had smart librarians who knew exactly where to find precisely what a reporter needed. Yes, kiddies, this was before anything could be retrieved at lightning speed via the World Wide Web.

Set designer Terry Lawrence’s stage mimics the pre-Internet newsroom when typewriters and word processors were still the tools to crank out a story or column on deadline. Molly’s desk, decorated with papers and a nameplate, is the main set piece. An Associated Press wire machine is to the right, which, the character explains, spits out news bulletins and the number of bells that ring signifies the urgency.

A copy boy (Joseph Franklin) arrives when the bells ring and pulls off sheets of paper and deliver them. I had wished that the Helper, as he’s referred to in the program, was more than just a delivery boy, but held a deeper significance – was he the Grim Reaper? Her link to memory? It was a bit unclear, which made the role more window dressing than a device to help create tension in the action.

But spending time with Bradshaw is worth every minute – she curls her lips around each word, looks her audience square in the eye, takes beautiful pauses as she passes between memory and current conversation. She is the firebreathing Molly in ever fiber of her being. She even adds a layer of desperation to a script that doesn’t come through with words to match the anxiety.  There are so many delectable choices given to the audience as gifts from Bradshaw and, in part, through Croft’s impeccable direction.

Good golly, Miss Molly, it’s no easy feat that Bradshaw and Croft hook their audience from the get go. It is what true theatrical talent is.  While the play itself is a bit lukewarm, Bradshaw is certainly red hot, and the Women’s Theatre Project has proved it is up for the challenge.