Allergist’s Wife is No Sneeze at Boca Raton Theatre Guild 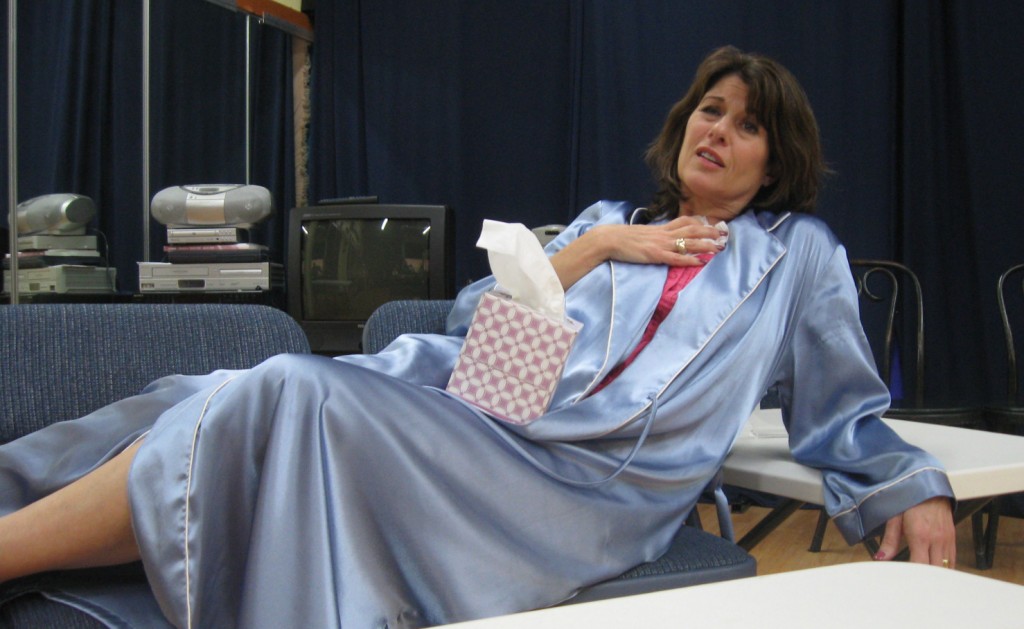 The mid-life crisis of an upper West Side dilettante is brought to life in Charles Busch’s comic hit The Tale of the Allergist’s Wife, now receiving a handsome production by the Boca Raton Theatre Guild.

Busch, known for his wacky gender-bending parodies in which he often casts himself as leading lady, stepped out of his niche and into the mainstream with The Tale of the Allergist’s Wife, which spent a year on Broadway and garnered three Tony nominations.

The story centers on Marjorie Taub (Patti Gardner) a fifty-something wife, mother and lover of all things philosophical, artsy and high-brow.  Marjorie’s two daughters are grown and out of the house, her unendingly patient husband Ira (Michael Beecher) is on a mission to relieve New York’s poor and homeless of allergies, and her mother Frieda (Iris Acker) drones on about her bowel movements and all the ways Marjorie doesn’t measure up.  So Marjorie fills her days with lectures she doesn’t understand, theatre she can’t comprehend, and art beyond her ken.

When her beloved therapist dies, Marjorie reacts by going on a violent rampage in a Disney store, leaving broken figurines of Disney characters in her wake. She retreats to her well-appointed condo, stricken by the realization that despite her dedication to all things artistic and philosophical, she will never actually create anything.

Enter Lee (Barbara Sloan) Marjorie’s long-lost childhood friend, a name-dropping globe-trotter who breezes in at Marjorie’s lowest point.  Vulnerable Marjorie sees Lee as everything she aspires to be — glamorous, intellectual, a woman who has spent her life eschewing social mores and norms and instead has rubbed elbows with the world’s rich and famous. (“I always travel with a wok and three pairs of false eyelashes,” Lee proclaims with Holly Golightly’s otherworldly matter-of-factness.) And as Lee infiltrates Marjorie’s condo, her life and her marriage, the question of Lee’s sudden appearance and what she’s really after becomes the turning point in Marjorie’s world.

Patti Gardner is believable as Marjorie, mining the melodrama in mid-life crisis. Gardner is the perfect counterpoint to Barbara Sloan’s vivacious Lee, who, in Sloan’s hands, could believably seduce a celibate and sell ham to a Hassidic.

The story and the characters exist in a Neil Simon-esque world populated with well-educated New York Jews who speak in snappy repartee and hurl one-liners at each other. Iris Acker excels at this with razor sharp comic timing and put-upon old lady feistiness.  Michael Beecher nails the long-suffering uber-understanding routine but fails to find the humor in Ira’s self-grandiose lines about serving the poor through his allergy clinic.

The set design by Natalie Tavares is impressive — a sleek and streamlined living room and kitchen which manages to look both expensive and homey.  The one misstep is the large window which looks out not on the spectacular view mentioned by the characters but on a plain white backdrop.  The lighting (uncredited in the program) is elegant and atmospheric.

While the first act drags with exposition, director Genie Croft steps up the pace in the second act, and the show soars when Gardner, Beecher, Sloan and Acker are on stage together.  Their interplay is worth the price of admission and make this production one to see.

The Tale of the Allergist’s Wife runs through Nov. 20 at the Willow Theatre in Sugar Sand Park, 300 S. Military Trail, Boca Raton.  For tickets and more information, call 561-948-2601 or visit www.brtg.org.