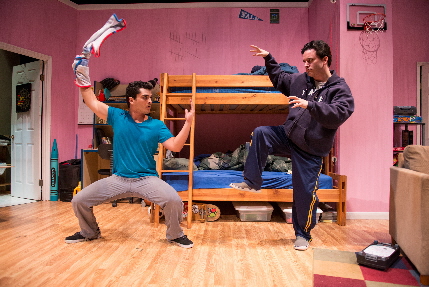 The initial production two years ago of Brothers Beckett, an insider’s reportage on Millennial angst, was not an artist’s sketch at the Alliance Theatre Lab. But its current revival feels far more like a fully-realized, finely-detailed work as if the painter went back in to enhance its virtues.

This production of David Michael Sirois’ serio-comedy feels deeper and richer under the auspices of the Arsht Center’s Theater Up Close program to develop local art. Sirois has said that he only tweaked the script and the changes are nearly invisible.

Part of the improvement may simply result from director Adalberto Acevedo and two of the five actors, Sirois and Mark Della Ventura, giving the broth more time to steep. Part may be the catalyst of having three new actors in the cast.

But far from a retread, this edition has a freshness that might draw fans back to the work and certainly commends it to first-timers seeking a funny, insightful work of theater by, for and about a generation not a decade out of college trying to find its  way in a Kelvin cold world.

Brad and Kevin Beckett are as close as siblings can be, bonded by being raised by uncaring parents. They wallow in a slovenly New Jersey apartment awash in board games, comic book memorabilia, last week’s take-out dinner and a kids’ bunk bed. It’s a Never Never Land for young adults stuck in childhood.

Brad (Sirois) is a 32-year-old who graduated with a philosophy degree from Yale after getting a full scholarship. He’s brilliant and eternally unemployed. Kevin (Gabe Hammad), 26, who only received a partial scholarship, graduated with an MFA in playwriting. He earns money as he can, but he’s actively shopping around his scripts.

The third crucial leg of this extended family is their warm and good-natured buddy Doug (Della Ventura) who lives next door, barges in with less warning than Kramer and likes to use their toilet. To call him a slacker would be to credit him with more ambition than he deserves. He brings to mind Animal House’s Bluto deathless remark, “Seven years of college down the drain!”

All three share a lifetime of experiences and cultural touchstones that produce non-stop banter, volleying catchphrases and even guttural nonsense syllables that they understand. Along with gal pal, Joyce (Julie Daniels), a germophobic meteorologist, they forge a 21st Century extended family that is both supportive, but also enabling of their failings.

But what comes out even clearer this time is that this symbiotic quartet is fraught with anxiety. In particular, Kevin hears the clock ticking away the options for his future, both professionally and emotionally. He announces that his long-time long-distance girlfriend Tuesday (Ashley Price) is coming to visit and that he plans to propose. And perhaps finally have sex with her. Brad, paralyzed in every facet of his life by a fear of failure, knows that Kevin’s ticking clock threatens the only thing in his life that he knows he wants – the status quo relationship with his brother.

What follows for all five are a series of clumsy hookups and attempts to sabotage any attempt to have an “adult” future for any of them.

Once again, the production is remarkable for the actors’ chemistry made evident by the unique banter among the four buds. Some of this is Sirois’ skill; Della Ventura showed the same talent last season in his play roomies.  But it’s more than what’s on the page. Since Alliance’s rebirth a few years ago, Artstic Director Acevedo has gathered together actors and playwrights who were already friends or became friends, and who have created a working relationship that borders on an artists’ collective. Playwrights write for their friends’ voices and characters, shape the work in rehearsal from their input, and steal bits of byplay from their real lives. At least that’s how it comes across.

At one point, Kevin gets angry at his friends for “making my proposal a Carol Burnett skit.” This is especially telling because the characters’ self- created banter does resemble a life intentionally modeled on sitcoms ranging from Dick Van Dyke to Seinfeld.

The script is terribly funny with such rim-shot exchanges as this one following Kevin’s reference to Shakespeare’s Richard II.

Doug: How do you guys know all this stuff?
Kevin: It’s called school, Doug.
Doug: I went to school.
Brad: He doesn’t mean obedience school.
Kevin: (gesturing to the bathroom which Doug has fouled) Which you clearly failed.

Did we mention a considerable amount of sex and toilet-related jokes, which fits with the characters’ arrested development?

The script is primarily dialogue, so the scores and scores of bits of physical comedy and staging are the work of Acevedo and company. Some of it goes by so smoothly, you hardly notice it. For instance, Doug crosses the room by stepping over the arm of a couch to stand on the sofa cushions with the blithe comfort of someone on automatic pilot who knows the layout of the apartment better than he knows his own.

Since the play is tailor-made, the “acting” evaporates instantly. Sirois’ Brad is sardonic and taciturn with that kind of faux pouting that a lover uses to silently prevent their partner from going out with friends. For all his studied air of indifference, he is deeply frightened that he will lose his lifelong playmate.

Hammad, one of the newcomers to the cast, slips on Kevin’s persona like the proverbial glove. Affable and earnest, Hammad’s verbal give and take with Brad persuades the audience that these two men have been sparring for two decades.

Della Ventura’s Doug is simply an inspired creation: a goofball savant who seems dimwitted about social niceties, but is surprisingly perceptive and empathetic about emotional matters.

Price is wonderfully uptight, an upper-crust denizen who is an easy target for Kevin’s taunts, but who is subconsciously mourning the half-realization that Beckett World has no place for her. Daniels is a fetching combination of enough seeming normality to function in the real world, but crippled by her own neuroses.

Inside the Arsht’s Carnival Studio Theater – six or seven times the size of Alliance’s digs in Miami Lakes — the set remains a delightful slobby playroom that has never seen a maid or a mother: walls painted in Pepto pink, dominated by a bunk bed with comic book sheets and strewn with revealing detritus thanks to set designer Jodi Dellaventura and prop mistress Anne Chamberlain.

Once again, the script still seems just a shade too long, even at an intermissionless  modest 100 minutes, but we’d be hard pressed to know what to slice and Acevedo never allows the pacing to flag.

There’s a joke in the title vis-a-vis the finale that we’ll leave you to discover except to hint that Sirois did not idly choose the family’s last name.  But it answers Tuesday’s question early on, “I’m not trying to take you away. It’s just time for us all to grow up, don’t you think?”

Brothers Beckett runs through March 24 at the Carnival Studio Theater , Adrienne Arsht Center, 1300 Biscayne Boulevard, Miami. Performances are 7:30 p.m. Wednesday-Saturday, 4 p.m. Tickets are $35. The first 25 guests who are 25 years and younger can purchase $25 tickets to Wednesday and Thursday performances in person at the Box Office beginning two hours prior to curtain. One ticket purchase per valid ID. Call (305) 949-6672 or visit www.arshtcenter.org.