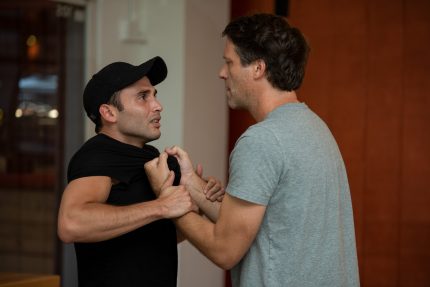 The most naturalistic drama on stage from O’Neill to Mamet still requires the audience to agree to a pact in which they don’t question the “reality” of what they are seeing or even the logic. It’s part of the deal that we call theater and we get rewarded with thrilling experiences.

So the premise that a symbiotic father-son relationship could evolve in which the emotionally wounded parties reveal deeply-held secrets, after the gay middle-aged artist violently kidnaps a young man who accepted an online request for sex, after the older man brutally spanks the resisting young man’s bare bottom and after both point weapons on the verge of killing each other — all that strains the pact of credulity.

And yet, if you are able to buy into it, the world premiere of Borrowed examines with emotion and specificity the lasting tragic damage of father-son and son-father relationships that imploded years earlier.

From Broadway Factor based in Miami, Jim Kierstead’s first script is far from subtle but also unafraid to look deep into complex legacies wrought by ancient family dysfunction.

The drama occurs inside a tiny cottage overlooking the Hudson River, with the audience lining three walls. It’s a space so intimate that sometimes you feel enclosed with these two sparring partners.

Initially, Justin – a good-looking 20-something — comes into artist David’s unkempt living room. He is a bit unsure despite having agreed on a dating site to give oral sex to this total stranger. David is pleasant enough, but his face is badly scarred from a botched cancer operation and one knee is in wrappings from an old war injury.

When Justin starts to balk at the sight of his host, the laid-back David erupts into a raging monster, locking the door, later using handcuffs and a pistol to curb his visitor.

It’s not obvious to either character, but obvious to the audience after a while, what David, an estranged father, wants – and it’s not sex. He bellows orders that end with the word “boy” and “discipline,” or commands the kidnap victim “Don’t give me lip” and “I can’t have you behaving like that under my roof.”

There are wrestling bouts, threats and retreats as they circle. David’s demeanor ranges from threatening to sympathetic to mournful to furious. Justin similarly covers a wide range of affects after the initial terror in his eyes evaporates. Each is always playing various head games as Justin looks to escape – sort of – and David tightly holds him hostage. And they actually do play a bit of chess.

But here’s the make or break credibility issue: Over the space of a single 24 hours, they create a bond of sorts and very surprisingly confide secrets they “have never told anyone.” They are seeking something from each other, although it’s less a validation of their present so much as surrogate forgiveness for their pasts.

As we said, the play is not remotely subtle with the characters intentionally and unintentionally calling each other Dad and Son. It’s pure theatricality that David’s being badly scarred serves as a metaphor for his internal wounds.

But most incredulity diminishes thanks to the cast and directors. Scott (who was terrific in the Carbonell-winning Dancing Lessons at Zoetic Stage) gives a bravura performance as an emotional pinball. But whether he is thundering or almost catatonic, Scott imbues every moment with anger, regret, pain, loneliness and self-disgust – the latter two allowing the audience to sympathize up to a point. Without giving away the ending (but, face it, only a couple of ultimate denouements are possible), know that Scott tops his solid performance at that point with two breath-arresting scenes.

Reyes has the harder job making Justin credible; he has the fear nailed down but Kierstead puts Justin in situations where his Stockholm Syndrome reactions are tough for an audience to buy. Yet, Reyes often makes the sale. Indeed, both actors have long revelatory arias that make you forget for a minute that you are watching a play.

Almageur deftly stages the characters’ movement, sometimes unable to stand still, other times standing lost in a memory being recollected, and she controls the emotional temperature like a tidal ebb and flow.

She heads a talented design and production crew who create a specific environment. Start with the character-revealing set design by Jennifer Ivey who creates an uncurated careless mess of mismatched furniture rejected by the Salvation Army in a room that has not seen in many months the oversight of anyone who cares about what it looks like.

Then there are the understated lighting changes designed by Anthony Galaska and the soundscape by Ernesto Gonzalez, which features an ominous electronic thrumming when violence erupts, as it often does. The frequent physical tussles were coordinated by fight choreographer Lee Soroko,

The play was written as a first-time effort by Kierstead, an experienced producer in Miami with the long-running Amparo and on Broadway with The Inheritance alongside current producing partners Willie Fernandez and Deborah Ramirez. (Editor’s note: This critic worked with Fernandez and Ramirez when all were employed by the Sun-Sentinel several years ago).

An early version was Zoomcast during the height of Covid on Kierstead’s Broadway Virtual series, then received another at Zoetic Stage’s Virtual Play Reading Series, and then turned into a locally-produced film that played at the Miami Film Festival. With the producers’ hope for an Off-Broadway  berth, we’d suggest the script could still use some trimming and Justin could be a bit more dynamic.

But if you can buy in to the credulity-testing proceedings, you’ll be gifted with a contest you have never imagined.

Several notes:.
.     The show’s website and QR program warn: there’s “sexual assault, abuse (physical, verbal, sexual, mental), suicide ideation, violence, kidnapping, blood, talk of substance abuse, derogatory language, use of a gun, violence against children/minors discussed.” It doesn’t specify the threatening use of a kitchen knife, handcuffs, the aforementioned spanking and profuse profanity.
.     The venue is quite hard to find. It is secreted in the middle of a new Design District-like complex called Ironside, which is a collection of boutique shops, a pizza restaurant and the like inside a long scruffy-looking structure on 4th Court. Look for the show’s posters on 4th Court to identify the entrance.
.      Also, the seats are not comfortable and you might want to bring a small pillow. Also, no late entry, no re-entry if you leave during the production. Masks strongly encouraged, but not required.
.      Borrowed is intended for older teens and adults, but the company is accepting donations to purchase tickets for underprivileged high school seniors, college students, actors and theater workers financially affected by the pandemic.