An Electrifying New Riff On West Side Story At The Maltz 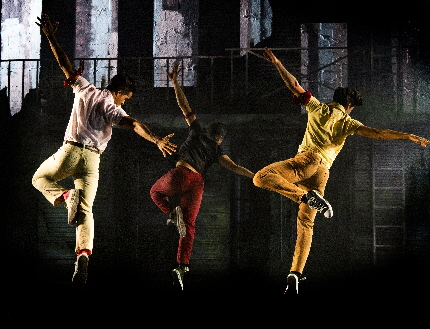 Let’s set this up in context.

Many South Florida audience members of a certain age choose to see a revival of a musical to recapture what they originally felt a half-century earlier. They yearn for visual and aural recreations that echo that experience. Listening to their banter in the lobby over the years, a large percentage of the Maltz Jupiter Theatre constituency seems to be in that camp.

But that’s not what the Maltz team does. They want to satisfy that yen, but also they aim – not to deconstruct a show – but to imbue it with a freshness. Think of frequent guest director Marcia Milgrom Dodge delivering Hello, Dolly and Gypsy as if they were just written and there was no prior template to follow.

So when the Maltz passed on licensing the iconic Jerome Robbins choreography and staging for West Side Story, they were in danger of disappointing some patrons.

This is crucial to acknowledge because the electrifying choreography by Al Blackstone and the vibrant staging by Marcos Santana not only wipe away any disappointment at not seeing Robbins’ vision, their work is so strong and original that Robbins rarely invades the audience’s consciousness.

Blackstone, Carbonell nominated for last season’s Newsies along with Santana, incorporates the essential finger-snapping and triangular layout of encroaching gang members. But otherwise, his solid dancing corps is all muscular tenseness exploding with arching backs, high kicks and hands raised to the heavens; jittery hunched-over bodies that contain just enough grace to communicate some buried humanity in the characters. The movements with and without music are drenched with the pelvis-pumping abandon of young people who have discovered sex.

The acting by the secondary leads and supporting cast is passable, but the miracle is the effectiveness of Santana, Evy Ortiz as Maria and Jim Schubin as Tony. This story takes place in about 48 hours, if that. Tony and Maria fall in love literally at first sight, and we mean deep abiding fantasy fulfilling love, to the point that she forgives him for killing her brother. And you buy it. Every single moment.

The voices delivering Leonard Bernstein’s music and Stephen Sondheim’s lyrics under Andrew David Sotomayor’s baton bring a welcome slightly different spin to a score most theater lovers know in their sleep — whether it’s disaffected youths expressing alienation or young lovers exultantly proclaiming the joy in discovering true love. When Schubin slides his voice into a falsetto at the end of “Maria”: and when Ortiz caps “I Have A Love” with a high G, it’s musical nirvana.

Santana, who contributed some choreography and musical staging, also is wise enough to let Arthur Laurents’ script scenes breathe. The actors take their time to express emotions without saying a word.

The adults are seen through the eyes of the kids, meaning ineffectual buffoons. That said, Troy Stanley’s Doc is one of the best performances we’ve seen him give and easily the best Doc we’ve ever seen, exuding genuine concern and ache at what he has seen his neighborhood and these kids turn into.

When it comes to stagecraft, Santana and his team have created some brilliant moments. The best hands down is the West Side Story analog to Romeo and Juliet’s balcony scene. When Tony begins serenading Maria on her fire escape, the wall of the building with the balcony slips from the back of the stage closer to the audience in the stage akin to a cinematic zoom. Then when he climbs to her, the wall moves even closer. And when he leaves her, she and the wall recede back into the darkness.

An intriguing conceit is bookending the entire show with wordless scenes set to scraps of the score: Set in the present day after a hurricane in a devastated Puerto Rico, the now senior citizen Maria searches through rubble to find a book containing a pressed flower whose origin only a newbie would fail to guess. Then the ghosts of her past start to appear. And at the end of the show, she returns for a lovely tableau we won’t spoil.

As always, the Maltz’s designing team is first rate. Adam Koch’s set looks like a bombed out European city with a back wall of paint-peeling cinderblock, fronted by a two-story high façade of windowless and doorless empty spaces, and skirted by half-blasted concrete borders. Cory Pattak creates an array of environments and emotions with his lighting. Jen Caprio’s costumes for the Jets is appropriately early James Dean, but she gets to indulge in color for the Sharks, especially in the school dance scene as the girls’ bright dresses swirl with the pirouettes.

And a special shout out to fight choreographer Lee Soroko: 92 percent of stage fights are obviously fake, worst of all in a musical.  But Soroko’s staging of the rumbles, scraps and other violence here is as close to convincing as you will see in theater.

And credit where credit is due: there are 27 people in the cast (plus an extra older Maria) and 12 in the pit.

The production isn’t perfect. There is little sense of menace or danger from anyone, especially as these street toughs hold notes at the end of a line rather than bite them off. An alternative might have been young men as lost boys, but that’s not there either. While this edition is clearly placed in the 1950s rather than some universal setting, the Jets are all skinheads. I’m not making that up. Angel Lozada as Bernardo is a fine dancer and singer, but with his boyish face and his long 1980s Kenny G curly locks, he wouldn’t survive 30 seconds in any gang you’ve ever seen. Few of the people in the cast would.

But overall it is a thrilling satisfying edition. We’d unreservedly recommend running out to get tickets, but management said opening night that entire run was sold out. Well, some people cancel because of illness. 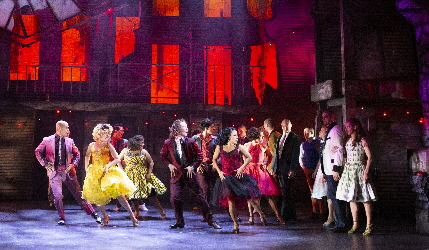