An Hour Without TV: Earnest Social Comment But Rehash Of A Hundred Soap Operas 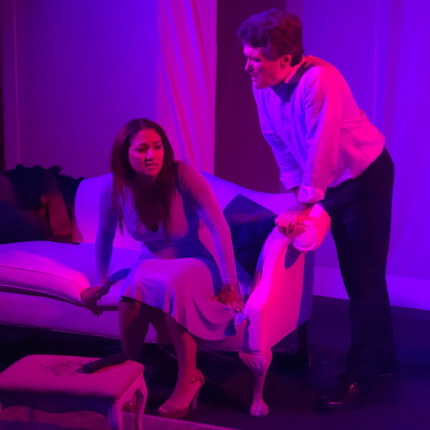 The maiden offering from Amani Productions crams together every single solitary clichéd line and stock situation from shallow daytime and nighttime television soap operas about deteriorating marriages in a non-stop parade lasting about an hour and 15 minutes. We dare you to cite one trope you haven’t seen or heard — often.

This 1984 play by the late prolific Spanish playwright and television writer Jaime Salom played in New York and internationally before its current bow from this independent company renting Empire Stage in Fort Lauderdale, but why is a mystery.

The set up is that on their tenth anniversary, which of course the husband has forgotten, the sensitive beautiful classical pianist Patty muses aloud that she will tell hubby Edward that she is leaving him. She tells us that they have not had a marriage in the emotionally fulfilling sense since the first year.

No wonder. Edward is an egocentric jerk CEO of an advertising firm who cheats on her openly with models in his stable, plus her own circle of friends. This caricature of an obnoxious entitled chauvinist probably coached Donald Trump on his Entertainment Extra boasts.

Even before the aforementioned hour begins, they begin an escalation of recriminations, sparring, scrapping, wrestling and yelling. He petulantly professes his love in ever more animated and ossified behavior, although clearly it’s not love but possessiveness and jealousy that she has found another lover.

It’s all shoehorned into an impossible confluence as every two-dimensional platitude – and, to be fair, truth – is unreeled. There’s the accusations (hers), the tears (his), the solid half-hour of over-the-top sloppy drunkenness (his), a brandished gun with threats of murder and suicide, and the off-stage sex under duress.

In one of the more restrained exchanges, the cluelessly egregious scumbucket asks rhetorically, “What have I done?… Are you on your period?”

Actors Mariana Campos, active in Venzuela, and Bo Sebastian, directed by Indira Leal, are courageously earnest, unsparing in their energy, and never ever convincing. But it would take Laurence Olivier and Judi Dench to make it credible.

We won’t spoil the ending, unless you email me privately, but while the depicted paradigm certainly occurs in real life, it runs 110 percent contrary to everything that Salom has constructed during the prior 70 minutes. Ibsen’s Nora would have slammed the door about 65 minutes earlier.

Indeed, the well-intentioned company states on a website, “This play invites people to reflect on toxic relationships and certain common unhealthy dynamics within a marriage. Also, the purpose of this play consists of denouncing in a visual manner physical and psychological abuse towards women in particular.”

The company’s artistic soul seems to be in an admirable place. Amani’s web presence states that their mission is to “provide entertainment through theater and film. We combine performing arts with visual designs by plastic artists, carrying a positive message for society.” And its vision as “We aim to become an artistic reference in the performing arts world by producing theatrical and film work that encompasses an innovating vision of plastic artists.”

We never want to pour cold water on any emerging production company, but they need to find a better property than this next time.