Andy And The Orphans: Funny, Poignant And Unsettling 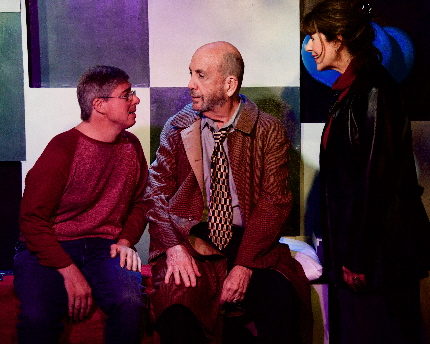 Edward Barbanell, Jeffrey Bruce and Patti Gardner as the titular “Andy and the Orphans” as Primal Forces / Photos by amy Pasquantonio

Resulting from Down syndrome as an adult, Andy’s simple, blunt and truthful verbal reactions to the complex statements and relationships swirling around him slice through the theater space and the artifice of the play form itself with a painfully accurate if non-judgmental slash.

This is an intended part of the playwriting, direction and performance of Primal Forces’ powerful Andy and the Orphans, which is as incisively affecting as it is quite, quite funny.

But it is amped considerably by the equally intentional intersection of life and art because Andy is played by trained actor Edward Barbanell, who himself has Down syndrome.

This casting of a disabled actor requested in Lindsey Ferrentino’s script is not exploitive, condescending or political correctness in the least; Barbanell, a Coral Springs resident who originated the role off-Broadway at the Roundabout Theatre, is note perfect in delivery and meaning.

Audiences cannot ignore that they are face-to-face with an inarguably accurate depiction of someone on that broad spectrum of symptoms. This is key because, since the play itself is actually more about how families cope with any such challenge, the audience unavoidably must contemplate their own reaction if faced with this reality.

Indeed, director Keith Garsson and his capable cast embody Ferrentino’s question of defining family responsibility. At one point, when Andy’s older brother and sister remind Andy that they are “family,” he corrects them with a simple more-truthful-than-he-knows observation that they are “friends.Amber ”

This critic has often talked about his theory of The Theater of Recognition in which audience members are more receptive and react more positively because it is their life or their people on stage. So in full disclosure as I did in reviewing New City Players’ work Falling last month about an autistic adult, I note that I and my family have dealt for 66 years and are dealing with my brother’s autism (not Down syndrome) but whose challenges mirror those of Andy and Andy’s family. While my courageous parents dealt with Peter’s situation far, far differently, believe me, the accuracy of this play is painfully reminiscent of our observation of other families.

Retelling the plot of the play is difficult because there are two major reveals that we will not spoil, even though Primal Forces’ production of one is problematic. But let’s try.

Grown siblings Maggie, a divorcee from Chicago who is emotionally coming apart, and Jacob, a tightly-wound fussy sort living in California, have returned to New York to hold a memorial for their widowed father who has just died. They have stopped off at a group home in Queens to pick up their youngest brother Andy, tell him that their father has died and have an “orphans’” road trip to the family home in Montauk in east Long Island for the service.

To ensure a financial safety net, the father had signed over custody to the state, so Andy must be accompanied by one of the agency’s caretakers, Kathy, a no-nonsense if quietly caring seen-it-all pragmatist.

In another part of the forest, we meet a troubled couple Sarah and Bobby trying to work out their problems at some kind of retreat program. It will be 35 minutes into the 80-minute play before we have a glimmer why their scenes, alternating with Andy’s, have anything to do with the plot. And we can’t tell you why now.

If all this sounds serious, most of the evening, including the dramatic scenes, are infused with the rollicking kind of neurotic character comedy and witty repartee of which Neil Simon was a master, especially the older siblings’ bickering. The memorial held at a Chinese restaurant is a hoot.

Andy, who has spent his life immersed in movies, is addicted to throwing out classic cinema lines that are, intentionally or not, hilarious or well-aimed commentary.  He can assuage his brother with, “Forget it, Jake, it’s Chinatown.” During a monologue made up totally of apropos movie lines (whose connection he may or may not always make on a conscious level), he proclaims with crescendoing anxiety, “You don’t understand. I could have been a contender.”

Garsson has done his usual fine job molding and pacing performances that have marked his previous five seasons with Genie Croft. The venue, the tiny Sol Theatre in Boca Raton, is notoriously too difficult for any kind of complicated physical staging, too broad a stage for the shallow acting space and seating area.

Barbanell depicts Andy’s laser-focused single-mindedness and inhibited IQ, yet delivers the sense that underneath the disability is someone who thinks and feels more than casual observers take the time to recognize.  It helps that he seems to have slightly graying hair, underscoring that Andy is an adult – a group whose future receives far less attention than the more attention-grabbing needs of youngsters.

He is surrounded by the always wonderful Patti Gardner as Maggie, equally adept Jacqueline Laggy as Kathy and, in one of the best roles we’ve seen him in, Jeffrey Bruce as Jacob. All of them have precise timing, especially with the comic lines, and facial expressions to hammer home both the humor and the pathos.

Amber Lynn Benson and Joey de la Rua are perfectly serviceable as the married couple. It hurts that they don’t have the appearance, dress or much else analogous to the characters they are playing. But that’s not their fault. That may be to keep their identity secret for 35 minutes, but it undercuts their credibility.

A shout out to veteran set designer Tim Bennett who has created a world of black, white and grey panels plus, amazing for this space, turntables that keep the narrative flowing.

Side note: We’ve said this before, but once again, applauding after a big production number in a musical is acceptable. But applauding between scenes in the flow of a drama, especially a seamless emotional journey in an intimate space simply destroys the tenuous fragile illusion of being immersed in reality. Cut it out!