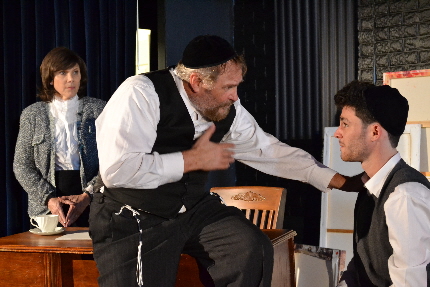 Across the face and embedded in the voice of the hero-narrator, we can see a drive he can’t ignore, the myriad profound costs and the nearly unequaled  joy of creating art in West Boca Theatre Company’s moving production of My Name Is Asher Lev.

As one character observes so accurately, “Art is a scream trying to come out.”

This tale of a Hassidic Jewish boy maturing into a world-class painter incisively depicts the considerable and specific price of heeding, pursuing and staying true to an artistic calling.

As the title character is compelled to become an artist in contravention of his family, his heritage and the dictates of his religion, Asher Lev’s premise sounds like the spine of just another play about an individual rebelling against conventional society. But Aaron Posner’s 2009 adaptation of Chaim Potok’s 1972 novel depicts this thesis with a depth and unblinking honesty that will resonate with creative souls regardless of art form or heritage.

The work well-directed by Alan Nash and Holly Budney is blessed with affecting performances by Spencer Landis as Asher and Peter Librach as his authoritarian father who clash in unavoidable conflict.

This is a memory play narrated by an acclaimed but controversial artist awash in pride and regret. In flashbacks out of chronological order, Asher traces the development of his talent during the 1950s in Brooklyn. His almost preternatural skill becomes evident even at six years old when the inquisitive child begins sketching. It horrifies his Hasidic parents, Aryeh, a political and educational emissary to the outside world for a powerful rebbe, and Rifkeh, a loving but submissive wife traumatized by the death of her brother who did similar work for the rebbe.

As Asher enters adolescence, he becomes increasingly interested in sketching the nudes and crucifixions he sees in museums. It further upsets his parents who discourage this waste of time that could be spent studying the Torah and the Talmud, and which they think may emanate from the Sitra Achra, or Other Side. This sets up profound and escalating collisions between the restrictions of the religion that Asher never abandons and a need to express himself that is as physical as a need as oxygen.

During one clumsy attempt to understand each other, Asher accuses his father of “aesthetic blindness,” which certainly is true, but his father accuses Asher of “moral blindness,” which is absolutely true as well. It is only one of the conflicts that also include generational divergence in an evolving society, the clash between art and religion, and the conflict between the individual and society. The protagonist says over and over, “My name is Asher Lev,” because this story is his search for identity.

It culminates during the five-year apprenticeship to a non-practicing Jewish artist, the vibrant Jacob Kahn. When Asher discovers an image to paint that epitomizes and reconciles all of his feelings, he faces a dilemma because this eventual masterpiece “Brooklyn Crucifixion” is guaranteed to alienate his family and community as certainly as a Mapplethorpe photo. Depicting his mother crucified between he and his father, it is both truthful and a betrayal of the family’s privacy.

Posner adapting Potok gives Asher heartfelt lyrical expressions of that drive and that joy. They are delivered with honesty and the poignancy of mild rue by Landis. The actor’s first professional job occurred late last year in the lead role of Usnavi in Measure for Measure Theatre’s In The Heights — about as culturally opposite a role as you could dream up and, other than a shared enthusiasm, distinctly different characters. Although he is not as effective playing Asher at ages 6, 10 and 13 (what adult can do that?), he nails the young boy’s unbridled joy at discovering the ability to create. More crucially, he clearly communicates Asher’s growing devotion to his art. For instance, Landis inhabits Asher’s agony at causing pain when his anxious mother urges him to continue drawing “pretty birds and flower,” but newly awakened to his responsibility to depict the truth, he tells her that those drawings “are lies.”

Landis certainly is still learning acting skills; he’s not always compelling every moment. But his talent and likeability is solidly capable at carrying the show. There’s a good deal of promise here.

Librach also tackles a completely different father than he did in this theater’s Brighton Beach Memoirs a few weeks ago. He communicates convincingly how complex and multi-dimensional Aryeh is: loving and supportive in one scene, perplexed but trying to understand in another, and unapproachably furious at his son’s perverse rebellion when he utters the line “Better you should not have been born.”

Also in the cast are Francine Silver Birns as the mother caught between supporting her son’s aspirations for the future and supporting her domineering husband’s antiethical beliefs born out of millennia. Craig Dearr is the iconoclastic mentor Jacob who issues an ending stream of harsh but enlightening aphorisms about art, truth and responsibility. Krystal Adela Mills plays a championing gallery owner and later a model.

Nash also did the lighting and scenic design –a wonderful jumble of empty frames and reversed canvasses. Budney designed the costumes including ones for Rifkeh that reflect her changing moods as the narrative leaps back and forth in time. Both selected various pieces of background music – often the pointillistic harp and pianos – that evoke the intricate machinations of a creative mind.