Bell Book And Candle Only Intermittently Casts A Spell 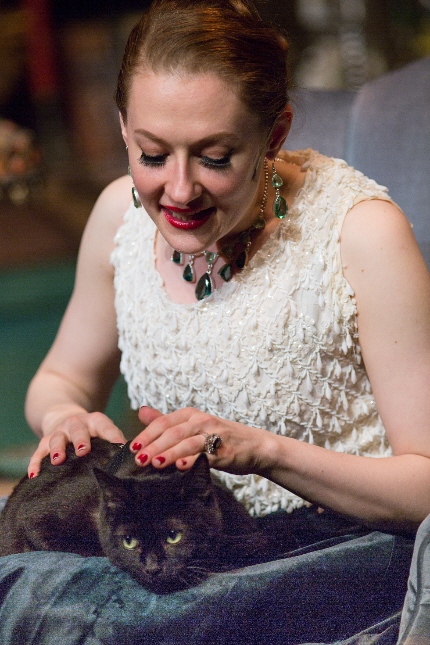 Imagine you could have anything or anyone you wanted with virtually no effort; the prize might not feel quite as satisfying. Bell, Book and Candle postulates that magically being able to have what you want through magic doesn’t feel very magical once you get it.

Broward Stage Door’s quite serviceable but not bewitching production of this 1951 fantasy love story doesn’t feel especially magical in the first act, but it locates the right bag of pixie dust in the second act to show why director Michael Leeds wanted to do the play.

The premise is that witches and warlocks live incognito among normal mortals in sophisticated Eisenhower Era New York City. Other than their ability to make phones ring in the middle of the night, summon mortals to their door, turn off lights with a finger snap and other modest talents, they look and sound exactly like your next door neighbor if you happened to live in one of those cozy NeverNeverland Manhattan enclaves.

Gillian Holroyd (Melissa MacLeod Herion) is a lovely accomplished practitioner who becomes intrigued with the handsome guy upstairs, the publisher Shepherd Henderson (Nicholas Wilder). At the urging of her dotty aunt Queenie (Janet Weakley), she puts a love spell on Shep, in part because he is engaged to marry a woman whom Gillian hated in college.

Instantly, he falls insanely in love with Gillian. They begin a two-week affair to the bemusement of Gillian’s snarky brother, the warlock Nicky (Thomas Karner). The ne’er-do-well sibling is perversely co-authoring a book about the Manhattan covens with the hapless eccentric Sidney Redlitch (Ken Clement), a tome no one but Redlitch is taking seriously.

Gillian is enjoying the ever-more amorous relationship, but witches are incapable of falling in love. So when the besotted Shep proposes, Gillian realizes this lark has gotten out of control to the point that one or both will get hurt.

She doesn’t quite realize that her own feelings have been strafing very close to true love. What she does own up to is that she has cheated to obtain Shep’s affections by not telling him of her secret life and how he was initially hooked. Their relationship inevitably takes several troubled corkscrews before the final curtain.

Bell, Book and Candle is better known as a 1958 film with James Stewart, Kim Novak and Tony Randall, but it started life as one of those thoroughly entertaining if insubstantial plays that dominated Broadway before television became ubiquitous. It was one of the late works written by playwright-director John van Druten whose next play was I Am A Camera, the basis of the musical Cabaret.

Bell on Broadway starred high-wattage Rex Harrison and then-wife Lilli Palmer, which indicated something crucial about Stage Door’s production. The leading actors of this play (and Camera which starred Julie Harris) must have that level of God-given charisma and star quality that no training can provide. It’s no shame that the hard-working leads here don’t have that innate gift to make the proceedings compelling when van Druten doesn’t give them a lot of dramatic conflict to depict in a first act that relies instead on that spell that “stars” cast.

Herion is a charming heroine who exudes intelligence, confidence and a bit of Myrna Loy’s exotic knowing seductiveness. Wilder, while considerably duller with a slight lisp and not much of a leading man aura, is still adequate but not very captivating. But neither have what Novak, Palmer, Harrison or Stewart emitted just by walking in front of you. It’s only when the relationship goes off the rails that the two actors have some dramatic meat to work with. Both then get a chance to exercise some acting chops and the play becomes significantly more enchanting.

Redlitch is solidly in Clement’s comic wheelhouse, Karner is appropriately mischievous and Weakley is the performer most in tune with the classic trope of the piece channeling the idiosyncratic yente ala Elsa Lanchester or Marion Lorne on Bewitched.

Leeds lobbied to have Stage Door do this play. He, indeed, directs it with a feel for that tone that van Druten wanted, a wry meld in which the world of magic plausibly coexists under the surface of elegant cocktail parties where tuxedos and evening gowns are de rigueur. The well-made script is very much a period piece from a time when theater was not so much a $125-a-ticket event as sheer transitory entertainment. But so is Hello, Dolly! and a lot of other shows.

Ardean Landhuis bathed the apartment in the appropriately spooky lighting when the feats of sorcery occur and Azzy Mora overlay the wry sound effects. Peter Lovello clad everyone in note-perfect costumes of the era, but he wrapped Auntie Queenie in wittily offbeat almost Bohemian garb including some lovely diaphanous sparkly shawls and bizarre hats that you might find today only in a Goodwill Store.

Apropos of nothing: The day after seeing the show, I was trying to think about how to describe van Druten’s intriguing premise of people who look like everyone else and live alongside them, but who are secretly different and who have their own hidden society with their own specialty stores and clubs. Suddenly, a thought hit. And doing a little Internet work, my intuition proved true: Van Druten was, indeed, gay. So despite firmly setting this piece in a heterosexual world, it might be fun to go back and watch it through that lens.

Side note: Welcome back to the stage the superb actor Wee Thomas as Gillian’s familiar Pyewacket, whose green eyes and hungry grin have been sorely missed since GableStage’s Lieutenant of Inishmore in 2007.