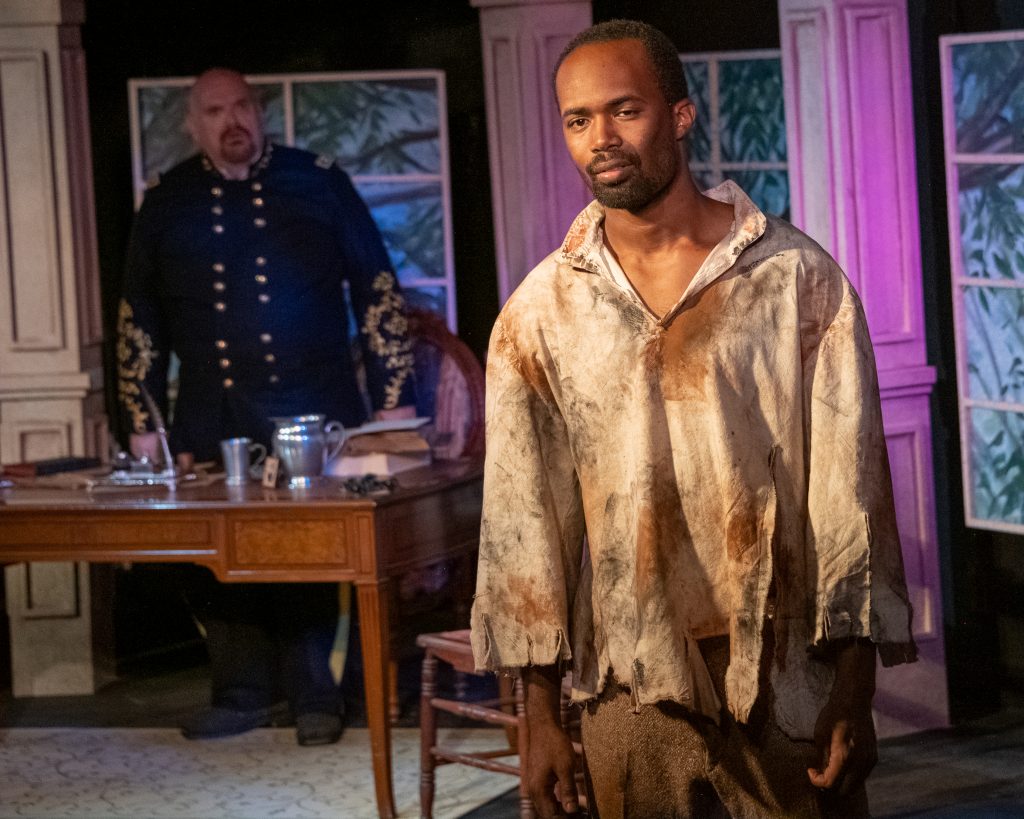 The fate of Denzel McCausland as an escaped slave is mulled over by Union general Troy J. Stanley in Boca Stage’s Ben Butler / Photos by Amy Pasquantonio:

Once again this season, it’s fascinating how current social upheavals have laid an extra layer of relevance and resonance on a theater piece that was not quite anticipated when it was written or when it was chosen for production by a theater company.

Richard Strand’s comedy-drama Ben Butler certainly is and was meant to explore efforts to improve race relations and address inequities when it was first produced in 2014, and when Boca Stage (then called Primal Forces) planned to mount it just before the pandemic hit.

But this tale about a runaway slave seeking refuge in a Union fort on the cusp of the Civil War – in a tone alternately serious and humorous – has taken on an extra spin in light of the spread of the Black Lives Matter movement in the past few years.

Staring at each other face to face, two unusually intelligent, quick-witted and articulate men verbally duel, banter, negotiate, tease, maneuver and struggle to find a solution when the law, military regulations and social mores threaten both their futures if they take the simplest and most humane path.

Although coming from a different place and ending in a different one, the play echoes the uncomfortable dance of whites and Blacks trying to figure out their roles in achieving social justice that is the centerpiece of GableStage’s contemporary The White Card, which is finishing its run.

Riffing on a real dilemma and a real title character, the fictionalized story introduces Benjamin Butler (Troy J. Stanley), a lawyer and politician made a general in the Union Army just as Virginia is seceding from the Union. He has just arrived to head Fort Monroe in that state with a Confederate artillery force entrenching in nearby. He has no military background, but his lieutenant Kelly (Jordon Armstrong) is a battle-tested adjutant.

Even before Butler is unpacked, three slaves led by Shepard Mallory (Denzel McCausland) escape from the Confederate position and seek sanctuary in the fort.

Mallory is by his own admission a strange mix whose mien changes by the moment — humble and arrogant, submissive and argumentative, scared and confident. His vocabulary and vocal delivery indicate some advanced level of education, but he is terrified, even furious when Butler suggests that he knows how to read.

At this precise point, an 1850 law required – and Lincoln agreed – that runaway  slaves must be returned to their masters. Butler is hardly a far-thinking progressive; he voted for Jefferson Davis when he was a delegate to the 1860 Democratic National Convention. But under his bluster and posturing, he’s a decent human being who wants to help Mallory. But when he finds a potential solution – or two – Mallory rejects them for unknown reasons.

“A drowning man who will not take your hand cannot be saved,” Butler says. The image echoes a bit with today’s situation in which some justifiably angry BIPOCs are not especially welcoming the efforts of those whom they brand “privileged whites” wanting to help establish equity and respect diversity.

In Mallory’s case, the actual reasons have little to do with racial politics. But Mallory has something he won’t immediately reveal. Clearly, there are a few surprises and mysteries in each man that are complicating matters, especially since a Confederate major (Jim Gibbons) is coming to retrieve Mallory – and likely scout out the fort’s defenses.

The ultimate solution worthy of a lawyer’s ingenuity is, indeed, the one that the real Butler pioneered and was adopted throughout the front lines during the war.

Croft guides the evening expertly, an especially difficult task telling a serious theme when the story is suffused with almost Neil Simon humor that results when two seemingly different men with strong characters clumsily try to navigate accepted racial expectations and social norms of the time.

This marks the best work we have seen from the imposing Stanley, comfortable in musical roles like comical Charlemagne in Pippin and the doomed Strauss in Titanic. But here with a shaven bull head and shining eyes under a prominent brow, he gets to display a considerable range, especially inhabiting a man of accustomed to wielding power (in addition to white privilege) but who is uncomfortable both in his new position and in trying to do the right thing, both legally and humanely.

McCausland, who scored in New City Players’ difficult two-hander Lungs, is amazingly successful making Mallory credible in an ever-changing kaleidoscope of traits and attitudes – and keeping him a likable sympathetic figure even as Mallory is seemingly impossible to satisfy and doggedly argumentative. He’s a talent to watch.

Armstrong, a solid actor, manager and set builder, amps up the comedy as the professional soldier trying to cope with a newbie superior officer. He can be a verbal straight man to Stanley’s Butler or silently barely able to subsume a grin at all three men sparring with each other.

Gibbons, one of our favorite character actors going back a couple of decades, adds another portrait of someone confident in the social surety of his position and flummoxed by the resistance of Butler.

A significant plus are the costumes from Alberto Arroyo whose uniforms reflect recently-appointed commanders with no military experience just before a war starts – immaculate as if they were just pulled off the tailor’s rack and embellished with gold braids and epaulets.

Dustin Hamilton’s set includes furniture and props that could well have come from the period. 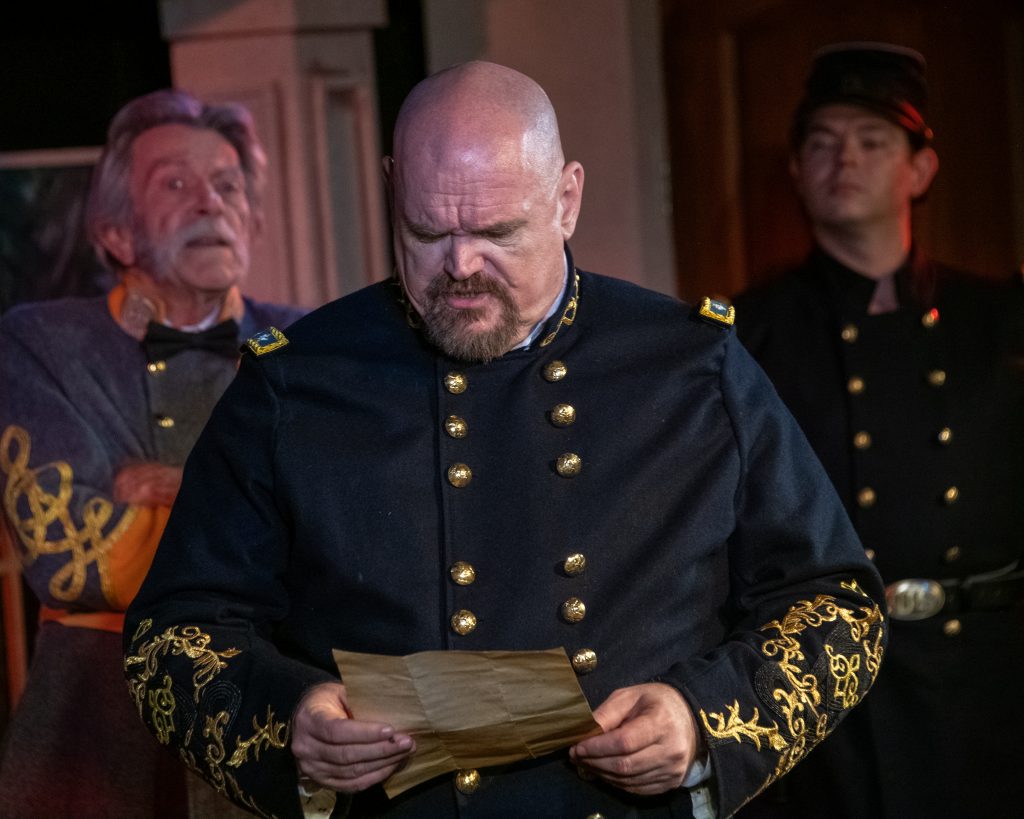