Blonde Poison: Rationalization Of Evil Seen From The Inside 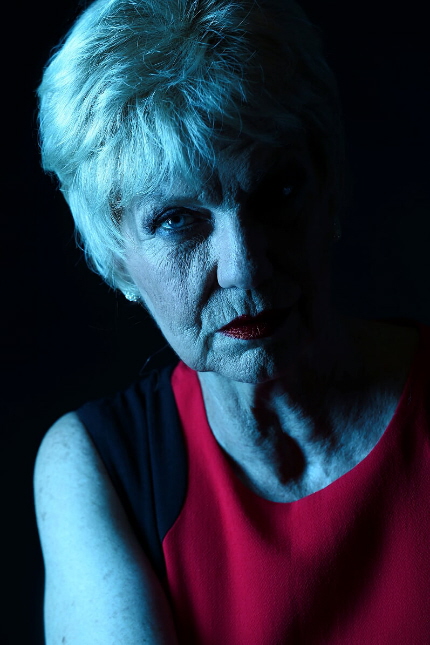 Marketing for the harrowing play Blonde Poison asks whether its central character, a Jewish woman who identified about 3,000 other Jews to the Gestapo for “deportation,” is “villain or victim?”

Without seeing the play, even offering that choice would seem absurd and, indeed, Gail Louw’s script does not side with the real person whom the story is based upon.

But Louw, Primal Forces director Keith Garsson and a brilliant tour de force performance by Lourelene Snedeker tell the story from inside the protagonist’s mind.

While Stella is dislikable early on as she looks back on her life in the early 1990s, her thinking-out-loud dry run for an upcoming interview deepens the portrait to show a far more complex person and situation than any elevator pitch could communicate.

What she describes in her reveries and the very character that she unwittingly reveals are not surprises to anyone who has read much about what it was like to be a middle-class German Jew as Hitler came to power and then living through the ensuing nightmare.

What the three aforementioned artists succeed with so well is thrusting us inside the mind of a flawed individual for whom survival is worth any cost and for whom rationalization is a desperately cultivated art form as she insists over and over that she is a victim. This is no longer some academic debate in an ethics class, but a real person standing in front of you, consumed with fear at the consequences of her disobedience.

Hewing close to the facts, but obviously imagining the interior monologue, Louw introduces us to Stella Goldschlag, a 71 year-old woman with a bit of elegance and an attention to maintaining what must have been the patrician beauty of her youth. A journalist friend she knew as a child is coming to interview her in her smartly appointed Berlin apartment, so she nervously slips into musings of her life, sometimes talking to her dead parents.

Like many other Jews who ran businesses in mainstream Berlin, she and her family looked down on the “others.” She says, “We had nothing to do with those primitives, those eastern ones, those scraggly, smelly, oh, they were disgusting. Their beards, those hats, those hats they wore. Big things, big black things.”

Similarly, her family could not accept that the Nazis would come after good Germans like themselves.  “Maybe it won’t be so bad. What could they do that’s so bad? Kill us? Kill us all? Don’t be ridiculous. “

Indeed, as Jews were arrested around them, her coping mechanism was to hide in plain sight, a tall good-looking well-dressed woman with golden straw hair that defied stereotypes.

Louw’s skill as a playwright is reflected in Stella’s recollection of such moments: “We became invisible, U-boats. Taucher. Submerged beneath the seas of Berlin. Coming up for breath and then disappearing once again. Gliding through the underworld. How frightened Mutti and Vati were. How scared all the time, how nervous, how worried. How free I felt! How tall I walked. How I smiled. My smile was clean, white, Aryan.”

But after Kristallnacht, she and her family were arrested—her primarily because the Nazis hoped she could lead them to a former lover who was a prolific forger of identity papers. She was interrogated and tortured, but she did not know his location. So she agreed to name other Jews and their hiding places. This demand persisted for some time while the Nazis threatened to send her family to Auschwitz.

But even after the family was sent to the camps where they were killed, Stella continued, seduced by the freedom of roaming the city at will, the comfortable lifestyle and what Stella never realizes, the irresistible power of life and death. At one point, she describes with pleasure a cat and mouse game trying to out an acquaintance denying they know each other.

The irony is that this is the inverse of the choices and philosophy made by Sophie Scholl, the doomed college resistance organizer in the play We Will Not Be Silent playing down the street at Theatre Lab. Both plays ask the audience by inference a timely question, “What would you do?”

The script is so faithful to the events of Stella’s life that it does go on a bit long as she travels through four lovers, repeated arrests and the like. Dramaturgically it’s not necessary to hammer and hammer at this unrelentingly to get the points across. It also forces Snedeker and Garsson to go over the same performance ground at least once too often.

But Louw incisively investigates and explains how someone who thinks like that could do what she did.  And by laying out all of the pieces in the puzzle, she sows an uncomfortable questions about how we might deal with these situations.

Snedeker, a dramatic and musical theater actress with 21 Carbonell nominations, triumphs in a multi-layered creation of someone reliving the pleasures and horrors of her life. Her voice is almost musical in its varied phrasing, tone and intonations and her bright blue eyes are afire with a range of emotions. The real achievement, though, is how from the very beginning, she may exude a patrician self-confidence, but Snedeker subtly communicates something troubling under the surface. Until the last moments of the play, Stella is not remotely conscious of – indeed denies there is any basis for – feeling guilty. And yet Snedeker, with Louw and Garsson, make it clear that her culpability is becoming inescapable even to her. The seeming contempt Stella has for those accusing her slowly peeks out as glimmers of self-disgust.

Snedeker has long been one of the community’s theatrical gifts, although like many actors of a certain age, parts are becoming fewer and fewer as artistic directors choose fewer and fewer titles that need experienced veterans (certainly not in lead parts). It’s our loss. Maybe more on this in a future column. But it should be noted that Garsson (as well as the Pigs Do Fly troupe) have aggressively selected shows that make the most of these increasingly sidelined treasures.