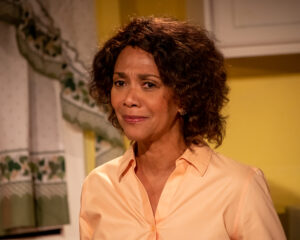 Time alone often brings out the moments of self-doubt; of deep, endless grief; those questions of what ifs and should haves that crop up in the middle of the night—all of which are so skillfully explored in Boca Stage’s scintillating production of the drama Time Alone.

In addition, this 90-minute play tightly written by Alessandro Camon looks at crime and punishment, the prison system and the law without being weighed down by issues.

Credit the deft, seamless direction by Genie Croft and the first-class cast of actors Karen Stephens and Rio Chavarro — each of whom elevate Time Alone into a bold, emotional production that reaches deep into each story arc.

Time Alone follows two seemingly unconnected people — Anna Jackson (Stephens), a young widow, and Gabriel Wayland (Chavarro), who, at age 17, was sentenced to 50 years to life in prison for murder.

The play begins with Gabriel recounting his fractured childhood, how he drifted to wanting to be part of a gang. To prove himself with gang credentials, he was told to murder another teenager, which he did, reluctantly but with a lot of guilt. On the advice of his attorney, he rejected a 25-year prison sentence but, through a series of technicalities ended up with a 50-year to life sentence and, eventually, to serving it in solitary confinement. 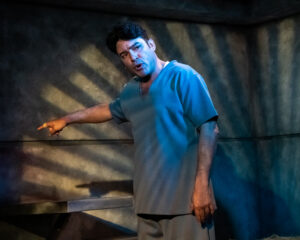 Chavarro’s kinetic performance keeps him in constant movement, portraying Gabriel as a caged animal confined to a small space with no hope of freedom —  which he believes he is. He seems truly remorseful about what he did as a teenager who had no idea of the consequences of his actions or his bleak future.

Gabriel uses his time to read books such as Moby Dick and Shakespeare’s plays and hones his vocabulary, proudly wielding “$10 words,” happy to surprise others that he knows these words. At the same time, the despair, loneliness and fear of going insane often bubble up. Chavarro’s portrayal elicits sympathy, yet never lets the audience forget his crime. Audiences will want to see more of Chavarro, who is scheduled to return to Boca Stage in The Odd Couple and who was last seen as Pablo Escobar in Zoetic Stage’s Our Dear Dead Drug Lord.

Time Alone switches to Stephens’ Anna, nicely dressed in a sharp, yet simple blouse and capris in her bright, cheery kitchen outfitted with all the needed accessories for a well-managed home. Anna’s home may be well managed but her mental state is not. A multi-Carbonell winner and nominee, Stephens, most recently seen in Theatre Lab’s Dorothy’s Dictionary, again shows why she is one of the best actresses South Florida is gifted with.

Stephens begins with an almost cheery recount of how she met her husband, Carl, in high school where he had a reputation as a womanizer but reconnected with him as an adult. Carl had obtained his dream job as a police officer and the two had a happy marriage, enhanced by the arrival of their son, Lawrence. Then tragedy entered, forever changing Anna’s life and personality.

Stephens shows Anna’s well-placed anger, her need for justice and, yes, vengeance. Her Anna is tightly coiled whose fury is barely contained. Stephens never misses a step portraying Anna as a very real, believable character whose losses have changed her view of life and others.

Time Alone’s action smoothly moves between Gabriel’s and Anna’s stories, illustrating how both are imprisoned and, in their own ways, in solitary confinement. Gabriel’s solitary confinement is result of a legal situation, while Anna has shut herself off from friends and family. Despite the heavy plot, Time Alone also offers hope for each character.

The landscape that the two characters inhabit is an effective two-part setting, made even more stunning by the Boca Stage’s postage stamp-sized, shallow stage. Gabriel’s prison cell is all grey, claustrophobic with a half-used roll of toilet paper the only “decoration.” Anna’s bright kitchen is well organized, sleek with appliances positioned just-so. Little touches such as a lovely spice rack add to the ambience of the kitchen that was once so important to Anna and is now just another place she inhabits. Kudos to the set by Ardean Landhuis and scenic artist Cindi Blank Taylor. Let’s not forget master builders Jordon Armstrong and Johnbarry Green. David Hart’s sound enhances Time Alone.