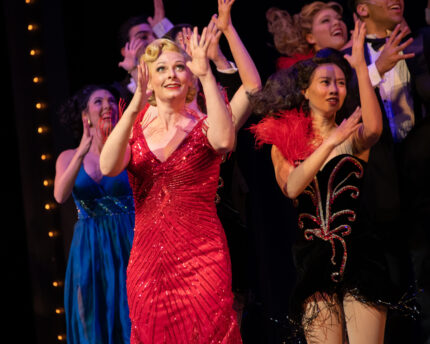 If only for the opportunity to enjoy the always effervescent Aaron Bower inhabiting a role she was born to play, we’d urge you to see the Wick Theatre’s revival of the updated Cole Porter musical Anything Goes.

But the broader truth is that every aspect of this tuneful, witty musical gets as fine a production here as you can ask for, whether it’s the clarion voices, perfect comic timing, inventive staging, stunning costumes, fine set, a kaleidoscope of lighting, even the quality of the digital sound.

From the precise pounding tapping of nearly the entire cast in the pile-driving title number to the glory of the revival-infused “Blow, Gabriel, Blow,” this edition is pure musical theater hallelujah.

And while, again, nearly every artist is having an infectiously good tim, Bower’s nightclub singer-turned-evangelist is the on-stage definition of star quality. Without a shred of predecessors Ethel Merman, Patti Lupone or Sutton Foster, Bower creates her own Reno Sweeney who exudes New York sophistication from the dry droll speaking voice to her clarion vocal sound to her sensual physicalization — knowing come hither eyes to the long legs encased in spangled low cut gowns.

We’ve been savoring Bower’s work year after year, most recently as the serene Fairy Godmother in the Wick’s Cinderella a few weeks ago. Her range has Sarah Brown in Guys and Dolls at one end and Dorothy Brock in 42nd Street at the other. But this is an apotheosis of all she’s done before: a drop dead gorgeous, martini smooth lady with a bemused knowledge of the world as it really is.

But she has the material to work with. The 1934 musical is considered the acme of Cole Porter’s career with a soon-to-be-standards song list that also encompassed “De-Lovely,” “I Get A Kick Out of You,” the trio “Friendship: and the laundry list duet “You’re The Top.”

The original script was penned by Brits P.G. Wodehouse (“Jeeves”) and Guy Bolton, but it didn’t land well on these shores so it was overhauled by legendary Broadway writer-producers Howard Lindsay and Russel Crouse (Life With Father). Someone got the idea around 1987 to keep the music but overhaul the script, this time by Timothy Crouse (“The Boys on the Bus” book and also Russel’s son) and John Weidman (Sondheim’s Pacific Overtures and Assassins). The result was a combination homage and good-natured ribbing of old-style Broadway musicals and vaudeville, but this time with a carefully crafted script overflowing with ultra-dry wit, broad puns, almost slapstick physical jokes, glorious music and engaging choreography.

RENO: You had me thinking you wanted to marry me.
BILLY: How could you think that? I’ve always treated you with respect.

RENO: I tell you, boys, it’s not easy being New York’s most notorious evangelist. Come, who will lead this sinner beside distilled waters.

EVANGELINE: Liquor has never touched my lips
ELI: You know a shortcut?

I can’t resist, one more. The ship’s captain asks a gangster where our hero is, who is trying to stay hidden.

MOONFACE:  As a matter of fact, I saw him going into the mizzen mast.
CAPTAIN: We don’t have a mizzen mast
MOONFACE: (With deadpan straight-m face) Then it must have been somebody else.

To make this kind of humor land solidly requires actors and a director with deft timing and an ability to do it with a straight face when you know that everyone from the actors to the playwrights not only know this stuff is silly but relish its silliness.

The plot puts a score of disparate broad characters on a ship sailing from New York to England. Young likeable businessman-in-training Billy Porter (Jeremy Benton) avoids getting off the ship even though his boss, the tycoon Eli Whitney (Troy Stanley) ordered him to stay and sell off stock shares. Porter is pursuing an old flame: the uppercrust debutante Hope (Alexandra Van Hassselt) who is being escorted by her dowager mother Evangeline (Britte Steele) and her wealthy fiancé Lord Evelyn Oakleigh (Paul Louis).

Also on board is con man Moonface Martin, a hapless Public Enemy #13 (Barry Pearl), his sex-driven gun moll Erma La Tour (Leah Sessa) and con men Spit and Dippy (Stefano Galeb and Giorgio Volpe). (A note: In 2022, the script was tweaked to take out the racist characterization of these two as Chinese.)

These denizens weave in and out of each other’s plot lines, making time to stop and sing about their feelings or dance the night away in everything from a Fred-and-Ginger swirl to a machine gun tap dance.

Norb Joerder, who seemingly has directed nearly every mainstream American musical in the canon, has applied his considerable bag of staging tricks to make the absolute most of this work. Working with Musical Director Darren Cohen and Choreographer Oren Korenblum, Joerder appears to have made the interplay among the actors even more complicated on knife-sharp duets like “You’re The Top.”

Every one of the cast members down through the ensemble smoothly fit into their roles. Benton is a fine affable hero, Paul Louis fresh off the procurer in the Maltz Jupiter Theatre’s A Funny Thing Happened on the Way to the Forum; is stitch as the English gent; Sessa once again steals the spotlight every time she appears, and Pearl delivers an encyclopedia of tongue sticking through the cheek humor.

Once again, at a Wick production, the array of period costumes overseen by Travis M. Grant, especially the gowns, are breath-taking. Ardean Landhuis’ set is the classic double-decker prow of the ship, again, blessed with an infinite supply of lighting changes from Kirk Bookman.

Simply said, the quality of work at the Wick varies, as it does at every theater, but we’ll gladly roll the dice betting that this is among the best productions in its nine-year history. 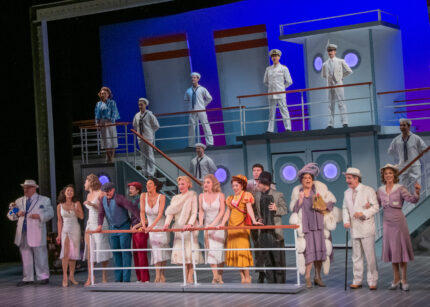