Posted on February 6, 2017 by Bill Hirschman 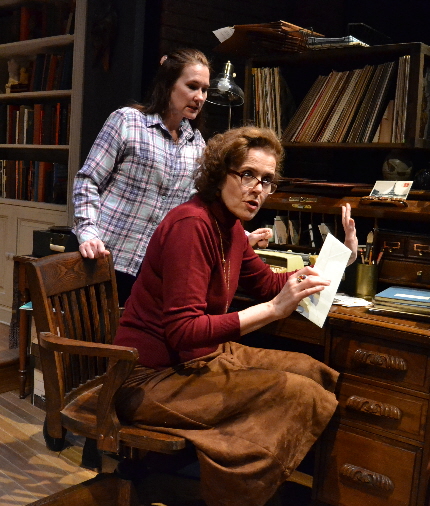 When critics see a steady stream of praiseworthy work, they begin to distrust their judgment as they repeatedly reach for accolades. So it has been in South Florida theater recently with a procession of solid productions crowned with a spate of ones deserving the term “excellent.”

But sometimes in the midst of such a flurry, there arises a thoughtful, imaginative and moving work so exceptional that a critic, if he’s honest, has no choice but to trot out superlatives that end in “–est.”

Palm Beach Dramaworks’ production of Collected Stories is not only one of the most affective and effective dramas seen in the region for many months, and it not only offers a superb performance by a young actress Keira Keeley molded by gifted director Paul Stancato, but it hosts one of the best performances by an experienced actress we’ve seen in a long, long time, that of Anne-Marie Cusson.

Donald Margulies’s 1996 script is a two-hander drama leavened with arch humor. It offers bravura opportunities in its tale of Ruth, a revered literary writer in late middle-age, whose breathless college mentee Lisa wants to learn everything from her heroine as she becomes the Great Woman’s assistant as well as her student.

It is not a spoiler to reinvoke the popular facile description of Collected Stories as being All About Eve in the literary world. Lisa evolves from dewy-eyed fangirl to assistant to protégé to colleague to friend to competitor as she cannibalizes Ruth’s life for her own work.

As soon as Ruth reveals a particularly precious and painful memory, you can see the freight train bearing down the tracks. Just to help you along, Margulies strews portentous lines through the evening. (‘You can’t censor your creative feelings because of the danger of hurting someone’s feelings,’ Ruth tells Lisa.)

But Margulies (Dinner With Friends and Time Stand Still) has far more in mind than charting betrayals and declines, although the crisscrossing arcs of rise and fall that he limns are intriguing. His Pulitzer finalist script dissects the guts of art, creativity, talent, acquired skill, fame and the price that must be or is chosen to be paid. He explores the cannibalistic nature of artists scavenging inspiration from the lives around them when they cannot find what they need inside their own experience. He illustrates the considerable pressure of early success and the driving fear of a sophomore slump.

In fact, once the expected trap is sprung, the confrontation is far from a one-sided exposure of betrayer and betrayed in a shouting match of dramatically satisfying recriminations. Lisa at first feigns surprise at her mentor’s anger. Then she unapologetically cross-examines Ruth’s rationalizations and mutual culpability in creating rules of engagement that enabled Lisa’s reprehensible actions.

The acting highlight comes late in the first act when the manipulative Lisa gets Ruth to gingerly recall that most treasured memory when, as a young woman herself, she had an affair with a  renowned poet genius destroying himself with dissolution. Cusson, a New York actress like Keeley, is mesmerizing as she draws the narrative out of her marrow and relates it first like the expert storyteller that Ruth is. But her eyes see something in the mist, and Cusson’s writer falls under her own spell, falling back through time to relive the defining but cauterizing linchpin of her life. Cusson creates a masterful exhibition of her decades of hard-won craft, woven so deftly that only theater pros will see how she does it. It is a performance that has to be seen to be appreciated, preferably from the right side of the auditorium.

Vocally, Cusson’s Ruth starts out with a slightly imperious air, likely a defense against emotional intrusion from this devotee. But her crisp voice and her crackling attitude warm up like someone enjoying a rare foray into the sun. Cusson the actress has a large bag of tricks such as occasionally holding vowels like a cabaret songstress caressing a phrase of an old standard.

But Keeley is almost as good. She starts portraying an earnest acolyte who looks and sounds partly formed like dough taken out of the oven too early. True, Cusson’s Ruth also convincingly morphs over the six years covered in the play from a self-assured self-satisfied almost bored cultural icon to a wreck shattered physically, emotionally, spiritually, artistically. But Keeley expertly depicts incremental growth from scene to scene. Keeley’s posture, body language, her speech inflections, her eyes and mouth all mutate as Lisa’s confidence and skill mature.

Of course, much of this pas de deux was guided and paced by Stancato, who was William Hayes’ associate director on the recent Long Day’s Journey Into Night.  Stancato is also a choreographer and that skill set is evident in the physicalization of the actresses’ performances whether it’s their specific walk, the gestures they make, or the way he moves them around the room like chess pieces.

It’s hard to know how much was found by Margulies, Stancato or the actresses, but there are scores of pungent bits of business such as Lisa, left alone for a few moments early on, lightly brushing her hand over the electric typewriter where her idol crafted those literary gems.

Stancato and lighting designer Ron Burns often bookend scenes by having the lights dim but not go out. Characters continue on with their lives silently in the half-light until they exit and the lighting changes for the next scene with morphing colors and intensities marking the passage of time. You can argue that those lengthy intermezzos between scenes are a just a bit too lengthy, but Burns expertly plays changing qualities of light over the set and the scenery outside (including a tree branch that adapts to the seasons) as well as focuses the audience’s attention with subtle changes of the intensity of light in various parts of the room.

Matt Corey, who applies soft environmental sounds through the open windows, also sets the mood in scene changes with music choices that Ruth and Lisa’s characters would favor such as Charlie Parker and Dizzy Gillespie.

K. April Soroko’s second-floor Greenwich Village walkup is a masterpiece of design with perfectly-chosen furniture reflecting Ruth’s 31 years in this haven-sanctuary, and props that perfectly represent off-beat souvenirs of trips.

Local theater patrons still talk about the 2010 production by Mosaic Theatre starring Barbara Bradshaw and Kim Morgan Dean. This one is every bit as good.