Brothers Of The Dust Benefits From Strong New Writer’s Voice 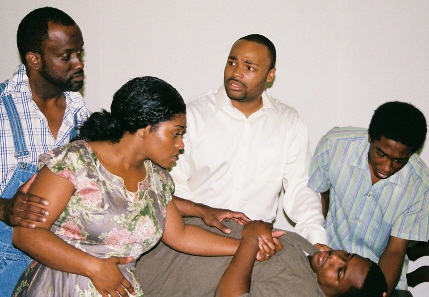 Earth, fire and blood in many forms mix with long-simmering resentments, loyalties, betrayals, secrets and love in M Ensemble’s Brothers of the Dust.

The production and performances veer from fiery and moving to occasional stretches in which it all goes stiff and stilted. But nothing can dim the consistent underlying glow of the script by young playwright Darren Canady whose vision and voice are unusually promising.

The play digs deep into the soil of family relationships amid the background of post-World War II but pre-Civil Rights Era when African-Americans began to leave farms in the South to find long-denied fulfillment in northern cities.

The three Colton brothers jointly inherited a 200-acre family farm in Conway, Arkansas, and now gather for the first time since their mother’s funeral seven years ago. Roy has given his life’s blood to maintain the hardscrabble farm with his devoted wife Mayetta and son Jack. That life is upended with the arrival of Wilson and his hard-charging wife Nella whose failed business in Kansas City has brought him home. They are pressing hard for the family to sell the land to oil speculators. Complicating matters is the appearance of Ollie — and his sophisticated girlfriend Audra — who has pursued a literary life in Chicago and is on the run from some life-threatening difficulties.

But the conflict is only the catalyst as secrets tumble out, sibling and marital ties are tested to the breaking point, and past and present betrayals threaten the future. It’s a profound irony that the mother deeded the land to all three sons probably hoping that it would keep them together. But instead it has only driven them further apart as African Americans discover divergent opportunities only now possible in the changing sociology of the 20th Century. It is clear from the outset that these are irreconcilable goals that can only end in a scorched earth tragedy both for the family and by extension for the African American people.

Artistic Director André L. Gainey has guided the cast in finding and illuminating the complex characters as they push and pull in a family dynamic both extreme and familiar from a hundred plays from Eugene O’Neill to Sam Shepard.

Sometimes the production feels stagy with actors standing in a straight line talking to each other; other times, it’s dynamic with bodies flying at each other. Sometimes the performers are just acting lines in a script; other times, they rip your heart out with the depth of their passion and electricity sparks across the stage.

Gainey and Company have inserted many bits not found in the script such as when Mayetta offers tea and Nella asks for Earl Grey. Here, Mayetta gives a discernable smirk of derision and an audible snort at Nella’s airs.

But it’s Canady’s writing that carries the evening – a discerning choice by M Ensemble’s Executive Director Shirley Richardson who met Canady through Facebook. Canady’s characters are more complex than immediately apparent. Many have virtues and vices housed in the same body. Each is wounded in some way and all yearn with a visceral need to fulfill dreams. All have a hard-won pride that is endangered every moment.

Canady’s dialogue requires his characters speak in a straightforward, even blunt manner without a flowery vocabulary. But he invests a nobility in these people underscored by a subtle lyricism in their words and colorful phraseology. He also has a feel for leavening the drama as everyone including Roy gets some delightfully delicious digs at each other’s character.

The play is so classically-constructed that, on paper, it sounds like a schematic from a playwriting text, but inhabited by flesh and blood beings on stage like those at M Ensemble, the foundations and framework are nearly invisible.

As Roy, Keith C. Wade has the toughest assignment. The character must be stolid, dictatorial and yet sympathetic. Canady has created someone who has difficulty expressing his deep love of family. Because Roy keeps so much inside, Wade struggles a bit making us see the real Roy. But when he gets the chance to let loose with anger, Wade’s performance suddenly comes unleashed. After that, his shell-shocked shut-down reaction to tragedies not only makes sense, but seems plausible. We never doubt Wade’s creation of someone who has poured his blood into the dirt for his family and cannot comprehend the reality that none of them really value it as he does.

Darryl Vaughn’s performance, too, can seem a bit perfunctory and stiff at times. But when he finds Wilson’s groove, Vaughn perfectly communicates someone whose disappointment enables the most self-serving pragmatism. Although Wilson has the antagonist’s role per se, Vaughn maximizes our compassion just as Candy hopes he will.

Mcley LaFrance is consistently effective showing the conflicting turmoil of the genial would-be sophisticate Ollie whose evolving success as a writer in Chicago is imploding. He and Vaughn both illustrate the frustration of people who have achieved their goal of “getting out” and yet whose dreams have turned to dross. Early on, LaFrance exclaims the word, “Family” with mixture of joy and exasperation familiar to most of us.

The most impressive work comes from Charita Coleman who creates Mayetta as the foundation upon which the family operates. Mayetta is both rock solid and fallible, intensely loyal but capable of weakness, and Roy’s equal partner who doesn’t quite get the credit she deserves. While she must keep her emotions in check to some degree for much of the play, her outbursts like the one at the very end of the play when she pleads for Roy’s understanding are among the most moving moments of the evening.

The supporting cast is pretty capable as well: Ashlee Thomas as the fish-out-of-water sophisticate Audra who just barely hides her disdain for the alien rural environs; Roderick Randle as the teenaged Jack straining to leave the farm for college against his father’s commands, and Brandiss Seward savoring the prime role as the tart-tongued out-for-herself Nella who gets some of the best lines such as “(The) thought of coming down here, God, I’d rather do the nasty with Perry Como.”

These have been complicated times for M Ensemble, the oldest continuously operating African American company in the state. They have been trying to find a permanent new home, changed up their schedule at the last minute as they did here to slide into a guest venue’s available slot, even running buses from their former neighborhood of supporters in North Miami to its sometime new home in Cutler Ridge.

But at the same time, Brothers of the Dust and the recent Knock Me A Kiss and King Hedley II indicate how the quality of the work has trending upward. In any event, they are providing an opportunity that audiences should take to hear this new voice in playwriting.

(Full disclosure: Canady’s script won the American Theatre Critic’s Association’s Osborn Prize in 2011 for an emerging playwright, a competition which I chaired.)
Note: While M Ensemble has moved some of its production to the South Miami-Dade Cultural Arts Center, this production is back at the Miami Light Box.