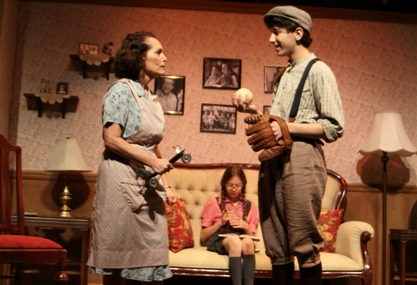 Merry Jo Cortada as Kate tries to rein in her son Eugene, played by Josh Lerner, while her niece, played by Hannah Wiser ignores them in Brighton Beach Memoirs / Photo by David Torres

So acknowledge that Broward Stage Door’s revival of Neil Simon’s thirty-year-old warhorse Brighton Beach Memories is uneven and stumbles. Then acknowledge, at least this critic will, that Stage Door’s edition frequently reaches into that moldy storehouse of decades-old memories of family relationships — and makes the throat close up, the eyes mist and starts a sudden epidemic of sniffling around the auditorium.

Simon deftly creates a Brooklyn family during the Depression, struggling with serious challenges to its solidarity including the explosion of long-suppressed bitterness. That the family unit absorbs these body blows and painfully adapts is a testament to the strength that once defined the nuclear family and its extended branches.

While the Jerome family is invested with Simon’s talent for witty rejoinders, this production is most affecting in its one-on-one scenes such as a father and son or a mother and daughter forgiving each other’s weaknesses and forging the beginning of new, healthier relationship.

A lot of its effectiveness is due to Simon’s incisive observations about the nature of family dynamics as a mixture of abiding love and those long-nursed resentments. Part of it is Simon’s masterful understanding of how to construct a sturdy play and how to embed shared experiences that punch those emotional buttons.

But again, don’t slight credit for director Dan Kelley and his cast, especially Merry Jo Cortada and Matthew Korinko as the parents. While much of the cast has trouble smoothly melding the comedy and the pathos that makes this such a tough but rewarding play, they deliver the two separate elements with skill, passion and a credible naturalism. The audible laughter and sniffles testify to their success.

Brighton Beach Memoirs was a watershed in Simon’s career. He had been layering in genuine feelings through his comedies as far back as The Odd Couple in 1965, increasing the dosage of pathos until he used the tragic death of his wife and his emotional resurrection as the raw material for Chapter Two in 1977. But in the minds of theatergoers, he never got credit for investigating real emotion until this one in 1983 – the first of three semi-auto-biographical plays centering on his alter ego, Eugene Jerome.

The plot turns on the wry narration of 15-year-old Eugene who wants to be a writer and speaks to the audience as the stand-in for Simon. For much of the play, Eugene is a bemused observer of his quirky but iconic extended family of articulate and passionate human beings.

Holding it together with grit and sealing wax is his tough, stoic and pragmatic mother Kate (Cortada); his wise but worn-down father Jack (Korinko) who works two jobs, and his older brother and roommate Stanley (Alex Salup) whose real world work helps keep the family afloat financially. Money is crucial because Kate’s shy younger sister Blanche (Elizabeth Simmons) has lived here since her husband died at age 36, trying to reduce her guilt on her dependency by straining her eyesight with sewing jobs. Blanche also has two daughters in the house, the lovely 16-year-old Nora (Mary Sansone) who has aspirations of being a dancer and who has Eugene’s hormones in overdrive, and Laurie, a 12-year-old with a heart murmur (Hannah Wiser). Underneath, almost everyone has passions and dreams that are being restrained, delayed or even abandoned because of the need to keep so many people living so close together in a functioning unit of economic and emotional survival.

It’s a family that has supper together at the dining table, an occasion for exchanging stories of each other’s day and the time to ask Jack for his advice on whatever problems are pressing. And on this day in September, a series of crises coalesces like a perfect storm of misfortunes. They will create such extreme pressures that stress fractures in the family crack open into fissures.

Kelley’s reputation is rooted in farce and musicals. But here he focuses on helping the cast excavate the genuine emotion. Their chemistry ebbs and flows, but you can’t argue with the palpable bond of love and pain that they create in those one-on-one duets. In fact, seeing this with an audience that acted as if they’d have to pay extra to laugh, this edition didn’t come across quite as funny as the script allows. Where Kelley has really succeeded is pacing: This show never drags; indeed, other than when it needs to slow for dramatic effect, the entire production glides assuredly at a brisk clip.

American Heritage junior Josh Lerner has the pivotal role as the brash and sassy Eugene, a part which has been portrayed by the young Matthew Broderick and Jonathan Silverman. Lerner has the requisite vitality and energy that bursts from his face like a carbon arc searchlight. His Eugene has that slightly off-kilter quality of a teenager who finds that his evolving adolescence and libido are keeping him both excited and off-balance. Lerner’s problem is that when the plot turns serious, he’s still pitching that grinning wiseacre persona when you’d expect Eugene to be a shade more chastened.

Cortada, the best single facet of Island City Stage’s recent Body Awareness, melts into the role of Kate. She perfectly embodies Kate’s steadiness as the beleaguered but loving rock of the family unit. She convincingly portrays someone who shoulders plague after plague. Late in the show, when Cortada’s Kate has a brief moment unobserved and she disintegrates into tears, it’s heartbreaking. When she finally succumbs to the weight and calls out, “Who’s watching out for me?,” it’s a cry from the gut recognizable to anyone who has headed a family or served as a caretaker. And anyone from a large family will recognize that call to dinner that sounds like a ragged bray amplified through a bullhorn.

Korinko, co-founder of Slow Burn Theatre Company, is best known locally as a leading man in musicals such as Assassins and Sweeney Todd. But he scored a Carbonell nomination last season in Stage Door’s farce Rumors (another Neil Simon opus). Here he smoothly inhabits the warm and insightful patriarch hiding his panic and feeling of failure over the family’s crumbling finances. If his Jack doesn’t remind you of your own father, you’ll wish that was who your father had been.

Sansone adds another convincing portrait of a girl on the cusp of adulthood, conflicted between obedience to her elders’ insistence she finish high school and a promising chance at her dream of being in a Broadway play. Sansone created a stir last season at Stage Door as the European refugee during World War II in A Shayna Maidel. Sansone is an attractive young woman, but like her work in the recent House Theatre’s spin on The Nutcracker,
she is quite credible playing someone much younger, which is a rare talent.

The rest of the cast is adequate, although there is a whiff of less-accomplished amateur theater in their performances in the first act. They seem like are actors in a Neil Simon play rather than people. But when Simon gives them some meat to play in the second act, the entire troupe elevates their game.

Shout outs are due Sean McClelland who created a convincing clapboard two-story home with period perfect wallpaper whose patterns gel with the modest flowered house dresses chosen by Larry Baumann. Praise is also due Ardean Landhuis who delivers some of the best lighting we’ve seen at a Stage Door show in some time.  There’s a sun-dappled, almost idyllic feel to the opening scenes as light comes through unseen trees. The changes in lighting inside the house skillfully focus our attention — which is crucial because that focus changes in a snap and back again as characters located across different rooms of the house become the fulcrum of the story, if only for 30 seconds or so.