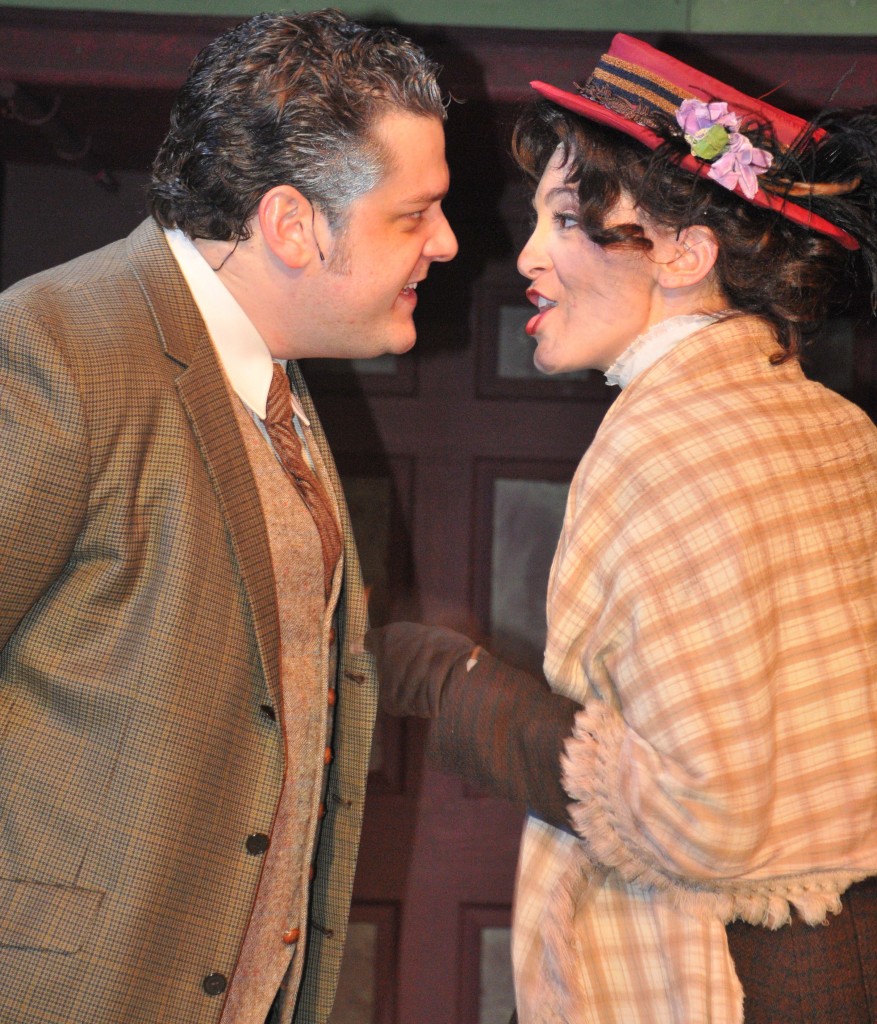 I have often walked down this street before, but the asphalt never stuck to the bottom of my feet before.

The Broward Stage Door has given us wonderful productions of Light in the Piazza, Mack and Mabel, The Drowsy Chaperone and A Little Night Music. But this edition of My Fair Lady is a disappointing muddle other than a few adequate performances under the direction of the usually reliable Michael Leeds.

The first two thirds of this evening is mostly a listless, lackluster effort. Surprisingly, the quality improves so significantly in the final third of the show that you wonder if they switched out the casts. But by that time, it’s too late. Even at its best moments, and it has some, there’s no magic, no charm.

In most productions, “Get Me To the Church On Time” is a joyous showstopper with a crisp jaunty beat. Here, it seems slapdash, muted and muddy.

The pacing is downright bi-polar. The pre-recorded music flies by too fast for the singers to keep up with (when they were actually listening to it, which some clearly weren’t); some of the book scenes drag by as if the cast was trying to qualify for overtime.

My Fair Lady is in the pantheon of Great American Musicals for good reasons, not the least of which is its brilliant adaptation of George Bernard Shaw’s Pygmalion. Frederick Loewe’s music is a soaring, passionate expression of character. Alan Jay Lerner, before he discovered pharmaceuticals, was an inspired lyricist and skilled craftsman at book writing. In addition to changing The Master’s ending, Lerner deftly reshaped Shaw’s speeches and dialogue to be palatable to an antsy musical theater audience but did little violence to the spirit of Shaw’s genius.

Stage Door’s strongest assets, thankfully, are Matthew William Chizever as the misanthropic speech pathologist Henry Higgins and Diana Rose Becker as the flower girl from the streets who he transforms into a “lie-dee” while she gets under his skin.

Chizever wisely makes no attempt to channel any of his predecessors including the indelible icon Rex Harrison. Instead, he delivers his own perfectly valid characterization. His Higgins has a little more charisma than Harrison, although I missed Harrison’s blissfully unaware and uncaring attitude toward the fallout from his actions and words. But Chizever was convincing when Higgins was unnerved by the fact that he was ruffled by Eliza’s defection in “I’ve Grown Accustomed to Her Face.”

My guess is Chizever’s fighting a cold, but he pleasingly sang far more of the score than some Higgins you’ve seen, and he mastered Lerner’s sadistically tongue-twisting lyrics to make them sound smooth and natural. He labors mightily to inject expressiveness in his songs, a task made three times more difficult by the digital music that barrels along as if it’s late to a party.

Becker, a willowy brunette with a lovely soprano that does justice to Loewe’s melodies, is just fair, no pun intended, when acting the intimidated Eliza in the first act. She really only comes into her own as an actress once she has been transformed into a swan and begins to push back.

She was quite funny as Eliza tries to fit in with posh society at the Ascot races. But the scene lasted at least twice longer than necessary because someone could drive a Humvee through the pauses between sentences.

In fact, the best stretches of the entire production also have no music. When Chizever’s Higgins and Becker’s Eliza bicker in the aftermath of the ball, there’s finally signs of life. Later, at Higgins’ mother’s home, when the two let their hard-won pride interfere with admitting they need each other, My Fair Lady shows what it should have been all night. The self-possessed Eliza and shaken but not stirred Higgins make a real connection in their sparring, complete with the complex subtleties that Lerner/Shaw wrote into the scene.

A nod goes to Regan Featherstone as the lovesick Freddy Eynsford-Hill who delivers a respectable  “On the Street Where you Live.” And credit Miki Edelman for giving Mrs. Higgins the dry droll topspin missing from everyone else in the cast.

But Michael Douglass who was unassailably solid in Stage Door’s recent Lend Me A Tenor is just a mess here as Eliza’s ne’er-do-well father, a godsend role to latter-day English musical hall vets. Douglass’ unrecognizable accent ebbs and flows; he doesn’t even bother to hit many notes in his songs, and his dancing, well, let’s leave that unaddressed. The only time he shines is in his Shavian speeches about society’s hypocrisies.

The genial Bob Levitt is a singularly undistinguished and wooden Col. Pickering who, like Douglass, needs to listen to the beat of the music when he’s singing.

Dave Campbell’s choreography may not have been especially impressive, but it was hard to tell because the energetic dancing corps was so unbelievably sloppy. Some of those moves where the boys swing the girls by their feet made me glad I don’t hold any of their insurance policies

A word about the music: Stage Door takes a lot grief for using professionally-produced pre-recorded tracks.  While we strongly favor live bands (and Stage Door hires combos for its  revues), we’ve mentioned here that if you’re going to do a major musical with a lush score like this one, the digitized score at least gives you a chance at reproducing the full orchestral sound that older audiences associate with warhorse titles. It should also be noted that the Asolo Rep in Sarasota and other theaters have done acclaimed intimate chamber versions of My Fair Lady with two pianos.

That said, Stage Door had been using presumably expensive scores whipped up from scratch by such folks as David Cohen. But the score here and in at least one other recent show has been provided by a company that rents them out. They are awful. They sound tinny and, worst of all, they race along at such an unnatural clip that singers can do little but sprint along.