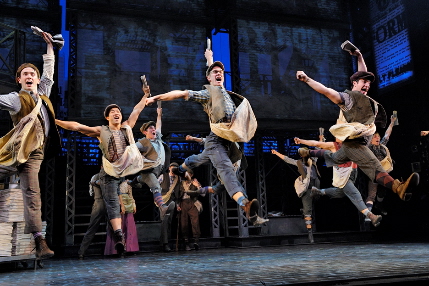 The adorable dancing newsboys in Disney’s Newsies, among the offerings through Broadway Across Miami next season / Photo by Deen Van Meer

Three of Broadway’s most popular hits come to the Arsht Center next season through the Broadway Across Miami series: the irreverent satire The Book of Mormon, the exuberant Disney’s Newsies and the exquisite Rodgers and Hammerstein’s Cinderella.

The latter two are unusual by playing Miami before any other South Florida venue – unusual because most shows play only a week at the Arsht with its smaller subscription audience as compared to two weeks at Broward Center of the Performing Arts and the Kravis Center with patron lists stretching back more than 20 years.

The 2014-2015 season will also include the stage version of the film Sister Act and a music and comedy recreation of the taping of two I Love Lucy episodes entitled I Love Lucy ™ Live On Stage.

Two others show will be offered, but not as part of the regular subscription package: Disney’s Beauty and the Beast, which is not that reality show about a beautiful waitress in a biker bar, and Wicked, a musical about empowerment for people with green faces.

Sept. 30-Oct. 5: I Love Lucy® Live On Stage – This is the wild card, a show created in 2011 that has played Los Angeles , Chicago and been on the road since last summer but has not played New York. In an attempt to make you feel you’ve gone back to 1952, audiences are welcomed by an emcee to a back-to-back filming of two actual classic episodes acted by look-alike sound-alike actors, trademark in the title notwithstanding. The show includes musical commercials. To see a promotional video, click here. http://www.ilovelucylive.com/media/

Oct. 28 – Nov. 2: Rodgers  & Hammerstein’s Cinderella – Not be confused with Giuseppe Verdi’s Cinderella or The Gershwins’ Cinderella or Wes Craven’s Cinderella, the musical adapted from the famed Julie Andrews/Lesley Ann Warren television specials is blessed with a terrific score. But the revival creators have spruced up the script considerably and added some stunning visual moments such as when Cindy’s rags turn into a ballgown before your eyes.

Dec. 2-14: The Book of Mormon – If you missed this smash musical on Broadway or during its highly successful stop this season at the Broward Center, here’s another chance to revel in this nose-thumbing that ribs organized religion (yet oddly admiring of faith in general) as envisioned by some of the minds behind the television show South Park and the Broadway show Avenue Q.

Feb. 3-8: Disney’s Newsies — Twenty-two years ago, Disney made a mediocre homogenized musical film on the backlot about a turn-of-the-century strike by adorably scruffy urchins starring a fledgling Christian Bale and some other folks in desperate need of a job. Although it had a cult following among impressionable tykes, it sank from view for decades. No one could have predicted the monster hit it became when turned into a Broadway musical in 2012 fueled by some astounding Tony-winning dance numbers and irrepressible performances.

April 14 – 19: Sister Act – Remember Whoopi Goldberg as a nightclub entertainer hiding from the mob in a convent? This has the same plot with a score by stage and screen composer Alan Menken who also wrote Newsies and Beauty and the Beast. Lots of royalty checks coming for him this season.

Not part of the subscription package:

Season ticket prices for the five-show subscription package range from $150 to $564. Current subscribers may renew their season tickets before the general public beginning March 9-April 4. Visit the Arsht Center box office, 1300 Biscayne Blvd. in Miami; or call the Season Ticket Holder Hotline toll-free at (800) 939-8587 or the box office at (305) 949-6722. Season renewals are also available online at www.arshtcenter.org.

This entry was posted in Performances, Reviews and tagged Adrienne Arsht Center, Beauty and the Beast, Broadway Across Miami, Cinderella, Newsies, The Book of Mormon, Wicked. Bookmark the permalink.