Carousel Swirls And The Music Swells At Actors Playhouse

Posted on February 8, 2017 by Bill Hirschman 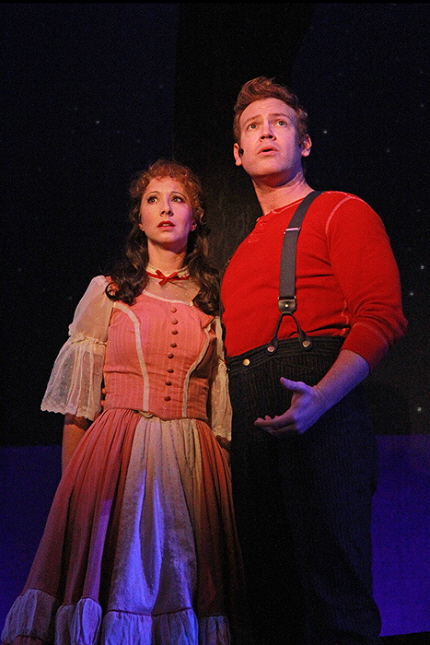 The miracle of the Carousel when it’s done well, as it is in this Actors Playhouse production, is that although it’s 72 years old and its protagonists are a wife-beating ne’er-do-well and the woman who stubbornly loves him despite the domestic violence, the bloody thing works in the 21st Century.

Several companies in the region are committed to honoring classic American musical theater including Broward Stage Door and the Maltz Jupiter Theatre.

But Actors Playhouse has an affinity that goes beyond budget and devotion. There’s a love affair totally devoid of the fear that the verities expressed in heartfelt song and dancing with abandon might engender raised eyebrows among sophisticated patrons.

So that when Billy Bigelow and Julie Jordan circle each other awkwardly or Nettie Fowler sends “You’ll Never Walk Alone” soaring, director David Arisco and his team embrace the secret element of Rodgers & Hammerstein musicals: sentiment, not sentimentality – something the film versions mishandle.

Both Rodgers and Hammerstein were sophisticated, intelligent urbanites conversant with the realities of a world embroiled in or recovering from a planet-wide conflagration of death and evil. But they genuinely believed in the basic decency of human beings and the ultimate triumph of love and compassion. Their works were not meant as escapism, but as reaffirmation.

Carousel is still meant as entertainment and succeeds at that with what Rodgers and Hammerstein both cited as their favorite score. But it examines the complicated nature of relationships that seem simple on the outside but are complex on the inside as George and Martha’s in Who’s Afraid of Virginia Woolf.

We’ve said this before, but Hammerstein is so skilled at constructing plots and penning dialogue that what seems straight-forward is carefully crafted work. He based Carousel on the much darker tragedy Liliom by Ferenc Molnar, but he transformed it into an uplifting message that you can mold your future no matter your past.

It’s still a plot that no 21st Century woman would ever write: The flawed hero hits his saintly wife and her major rationale in defending him is that, well, she loves him and that she somehow knows that he loves her, although his fragile macho ego prevents him from showing it or verbalizing it much at all.

It would not fly even now except that Arisco and his superb actors Julie Kleiner and Michael Hunsaker invest in their characters, as Rodgers and Hammerstein hoped, much deeper psychological and emotional levels than simply abuser and enabling victim.

They and the entire creative team also come very close to nailing the final scene – but not quite; Hammerstein sketched it in with very quick, broad strokes. But they do put across the themes of forgiveness, compassion, redemption, spirituality and the strength that can be drawn from community.

Arsico has a special affection for the piece; he has played Billy Bigelow several times. As a result, this version contains every bit of the show including the ballet in which Billy’s daughter struggles with the community’s rejection, and retains several extended dance breaks dating back to a time when such entertainment was required by audiences even if it didn’t really advance the narrative at all. In some productions, these dances and even a few songs are quietly abbreviated or cut, but not here. The result is that it’s a long evening of theater. (Hey, Camelot is even longer).

That’s a plus here because the choreographer Ron Hutchins (West Side Story) gets ample opportunity to show off his range with a reasonably skilled set of dancers, from the carousing fisherman in “Blow High, Blow Low” to the ballet featuring Alexandra Van Hasselt as the forlorn, rebellious Louise and Macia McGeorge as the carnival hand trying to lure her away.

But Arisco, who infuses his straight comedies with scores of bits of business, also adds such details to this production as well. For instance, the glorious “Carousel Waltz” is a purely orchestral piece played against a pantomime of the carnival coming to town, introducing characters and charting Julie’s attraction to Billy. But Arisco with Hutchins’ help sets the opening minute or two depicting women in the New England mill working their looms in time to the opening strains of the music, then having the workers head off to the carnival. It sets not only the tone and environment but squarely creates a reminder that this is a tale of blue collar workers, not Cole Porter’s socialites.

Also, during the early romantic scene in which Julie and Billy connect, blossoms fall at a crucial moment. Arisco has those blossoms fall again in the final graduation scene as Billy crouches next to Julie and finally says he loved her.

The performances are outstanding. Julie Kleiner has earned unstinting praise in virtually any role she’s been seen in, but once again here she exhibits not just a gorgeous singing voice but an ability to inhabit yet another persona so completely that the audience buys it immediately and throughout, falling completely in love with the character she portrays. This is no mean feat considering how Julie initially seems so out of touch with current social standards. But Kleiner makes Julie’s devotion that not of a dependent dishrag with no self-respect, but of an endlessly compassionate woman with an almost force of nature X-ray insight into the person trapped inside his exterior.  Her loyalty is a sign of strength not weakness.

Her ability to create this very specific type of human being is all the more impressive to veteran theatergoers who just saw her as the spunky Cockney at the Maltz’s Me and My Girl or the conflicted young nun in Doubt or the hapless Penny in Hairspray or the ingénue in 42nd Street or the blind librarian in the spoofy Toxic Avenger.

Young actors can learn from her by watching her face, which mirrors her character’s soul at every single minute. She never coasts, she is always present, even when she is just at the back of a group number. She also seems to have a bottomless well of expressions so that you never feel that she is relying on technique even if she is.

Local favorite Tally Sessions was slated to play Billy but he got a part in a Broadway show, leaving Arisco to spend his holiday scrambling for a replacement in New York. Arisco likely could not have done better than Hunsaker if he had had months to look. The tall handsome Hunsaker immediately commands the stage during the silent pantomime with Apollonian good looks but more on point precisely the manly catnip charisma, the swagger that bespeaks a manufactured confidence, and a smile guaranteed to seduce both the female patrons of the carousel and much of the audience of either gender.

And then he opens his mouth. A golden baritone emerges that stays true to musicology of the songs, but invests an actor’s nuances to show that there’s a different Billy living inside the bluster, even if Billy himself doesn’t know it. In “If I Loved You,” his Billy pours out the inner confusion, the deep longing and the stunned disbelief that somebody like Julie might believe in his inner worth, despite his pointed efforts to rebuff such a previously untrustworthy emotion as love.

Watch his rapturous rendition of the famed “Soliloquy” as he ranges across the entire stage, standing legs apart like a confident colossus and then his physical and vocal tenor change when he realizes his child might become a girl.

The supporting cast is unassailable. Lourelene Snedeker embodies the warmth of the nurturing Nettie Fowler, but her leadership in the anthem “You’ll Never Walk Along” provide the emotional highlights of the entire evening. Lauren Lukacek, one of the two New York actors along with Hunsaker, is a vivacious stitch as Julie’s buddy Carrie Pipperidge, bringing the comic chops that such roles required in 1945 plus a creamy singing voice. Nick Duckart makes an appropriately sleazy wharf rat Jigger Craigin, Mark Sanders is the confident American Dreamer Enoch Snow, Laura Turnbull is a fine Mrs, Mullins whose bravado barely conceals her deep worship of  Billy, Peter Haig depicts a welcome quirky Starkeeper, Kevin Reilley is Bascombe and Sean Dorazio as Heavenly Friend,

Musical director Caryl Fantel masterfully molds the singers and leads as eight-member band. The score as licensed is for about 21 pieces, so Fantel had to reduce and reorchestrate. A key element was making a keyboard often sound like a harpsichord. That gave the music a period sound that we have not heard before, but which felt valid. But the problem is budgetary: Very few people have ever heard a live performance or a recording of the scorer that did not enjoy a decent-sized orchestra and often a very large one. That full rich sound was noticeably missing over and over, especially in the iconic “Carousel Waltz,” arguably one of the best opening numbers in the musical theater canon (add Gypsy in that bucket).

The tech team did an admirable job, including Ellis Tillman’s costumes and Tim Bennett’s set, although Eric Nelson (who has done fine work for the theater) had some people poorly lit opening night.

As a whole, the Actors Playhouse production swirls and swells like the music in the titular ride that enchants.