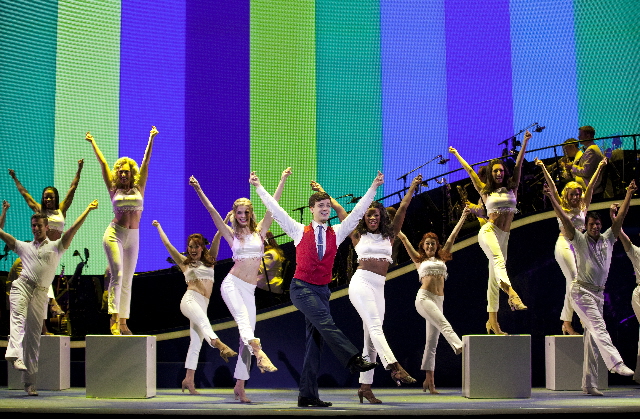 Once upon the 1960s, there existed theatrical offerings on Broadway unapologetically called the tired businessman’s musical. They were well-made, well-executed but unassuming diversions that left audiences feeling they had been transiently entertained if not especially moved, inspired or provoked to reflection.

Ironically set in the same period, the 2011 musical Catch Me If You Can unintentionally qualifies for the category as evidenced by the peppy road show making its South Florida debut at the Kravis Center’s stand-alone Broadway series.

This riff on the 2002 Steven Spielberg film about a teenaged conman is blessed with an impressive array of experienced creative artisans, many of whom were responsible for the far superior Hairspray.

Who knows what initially made these folks think this was a property that begged to be musicalized – besides the potential fiscal rewards of a show set in the hot Mad Men era and the pre-sold buzz based on the film title.

But there is something askew and ultimately unsatisfying despite Marc Shaiman’s breezy pastiche of a score, the off-and-on wit of the lyrics by Shaiman and Scott Wittman, the wry recreation of the period’s choreography by Jerry Mitchell, a book by Terrence McNally that layers a bit of emotional depth, and a winning lead performance by the young Miamian Stephen Anthony. That nagging shortfall may account for why the show barely made it through one season in New York.

The blame likely lies with the artistic premise nursed by director Jack O’Brien that doesn’t take its story seriously. The film was a comedy-drama loosely based on Frank Abagnale Jr., a charismatic forger who stole nearly $2 million before he turned 19 and who impersonated a doctor, airline pilot and lawyer along the way. The film charted the obsessive manhunt led by FBI Agent Carl Hanratty who developed a paternalistic feeling for his quarry. It also examines Abagnale’s troubled home life including a ne’er-do-well enabler of a father whose approval Abagnale unconsciously sought through his life of con.

Not wanting to remake the movie itself, the musical’s team reimagined the bulk of the tale as Abagnale confessing his story to Hanratty in the guise of a 1960s television variety show like Dean Martin’s Golddigger series. This fantasy in Abagnale’s head allowed the writers to luxuriate in recreating the now-quaint ring-a-ding-ding era that encompassed the Rat Pack and Hullabaloo. It slathers on rib-poking period references, from the heyday of the New York Yankees to the miracle of a 13-inch color television.

What doesn’t quite work is that the show is delivered through the prism of Abagnale’s heedless self-justifying view of himself which he doesn’t lose until the penultimate scene – and then regains in time for the finale. The truth is this guy’s a crook without a shred of conscience and he comes from a seriously troubled home. The show lacks a heart because Frank doesn’t seem to have much of one until the end of the show.

While popular culture has stoked the ordinary citizen’s envy of the outlaw’s glee-filled freedom dating back before Robin Hood, this doesn’t quite work here. The Sinatra vibe, the big production numbers with stewardesses in a kickline, the by-the-numbers Broadway ballads and the television show conceit don’t seem a good fit for a story which you subconsciously know has to have an unhappy ending. Hairspray gelled because of its subversive lampoonish tone. Here, this devil-may-care approach keeps us from caring much about the characters as real people. So we’re not terribly invested emotionally in these folks, even though several numbers examine the hero’s sad relationship with his father and there are obvious overtones of a surrogate relationship between Abagnale and Hanratty.

The entire show also feels like McNally and company are sketching out plot and character points from an outline. McNally, a fine playwright who has turned to musicals in recent years, provides a Jekyll and Hyde book which sometimes lets the characters interact at length, but usually he just delivers three or four lines of dialogue to separate splashy production numbers. Still, McNally can still turn a clever phrase such as Frank declaring “I was the Johnny Appleseed of fraud” or “I was producing more rubber than a tire factory.”

One of this production’s several virtues is Anthony (not to be confused by the local actor Steve G. Anthony who is old enough to be this one’s father). He has the boyish charm essential to carry the evening and an endearing infectious smile that we could see back in Row T. If he missed a few top notes, his energy made him stand out among an equally impressive corps of 24 actors, dancers and singers.

Merritt David Janes is appropriately straight-arrow nerd as Hanratty, whose devotion to his unsexy area of crime expertise has cost him a wife and much of an outside life. McNally may have given him a backstory, but like Frank, this buffoonish Hanratty is too much of a comic book character for us to feel any empathy for him – which is baffling since he has some introspective ballads.

Dominic Fortuna, with his mellow baritone, may be the most effective actor on stage with his portrayal of Frank”s father, a failure always deep in self-rationalizing denial yet ever hoping for his overdue piece of the American Dream.

Another strength is Shaiman’s catalog of homages to ‘60s musical styles from slick lounge numbers to soulful AM radio ballads. He simultaneously parodies their hedonistic innocence and caresses the genuineness of their sentiment. One woman said at intermission that she was not enjoying the show until she closed her eyes and just listened to the score.

Far more varied in quality are the lyrics which can be droll or bland within the same song. The big love duet between the globe-trotting Frank and the woman who makes him want to stop running contains the line, “I’ve seen the seven wonders of the world, but they can’t compare to you.” Ouch.

The set is mostly furniture slid on and off in front of a bandstand at the back of the stage that resembles the swoop of a roller coaster. But it is imaginatively accented with a kaleidoscope of gaudy video backdrops and animations that provide a sparkly sky of twinkling stars and silhouettes of gyrating go-go girls.

Special credit is due Music Director Matthew Smedal and a razor sharp on-stage band in snappy tuxedos who handle Shaiman’s eclectic score from swing to blues with the skill of a veteran bartender mixing a fine martini.

Like most tours of Broadway show, this one is “recreated” by people who assisted the original creators. But credit producers Troika Entertainment for spending some cash on the splashy look of the show as well as a large cast. (We’ll guess the weekly payroll is made feasible by non-Equity contracts).

In the end, Catch Me If You Can is an eminently likeable, finger-snapping evening that will please you while you’re in the audience, but won’t stick in your brain or heart longer than it’ll take you to drive out of the parking garage.

This entry was posted in Performances, Reviews and tagged Catch Me If You Can, Marc Shaiman, Scott Wittman. Bookmark the permalink.