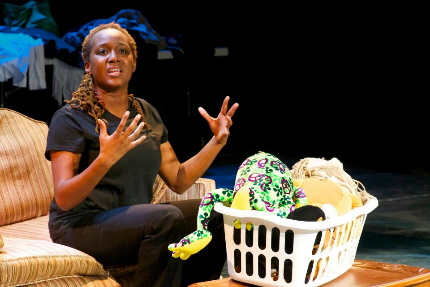 Admit up front that the world premiere of Christina Alexander’s one-woman show Hate! An American Love Storyis a tad unfocused, undisciplined, even sloppy theater. Then acknowledge that it’s also one of the most insightful and moving depictions that South Florida audiences have seen of the emotional viscera inside inter-racial, inter-gender relationships.

As a playwright, Alexander delves deeper into the specific reality of people inside these “different” definitions of love than what is usually explored in gay plays or black plays. She doesn’t settle for monolithic generalizations; she recognizes there is diversity even within diversity.

In one section, a young woman hunched over in a Disney hoodie slowly, affectingly describes the arc of her realization that not only is she not female, but she isn’t gay either.

Quietly, without overplaying the sad angst, she escorts us through the arc that has led her to becoming transgendered – a topic that has almost never been addressed at all in theater, let alone with compassion and gravity. The character says plaintively, “You don’t know what it’s like for your outside not to match your inside.”  Alexander gives herself so completely to the humanity of this person that the audience cannot help but begin to understand.

Some sections are wry and witty such as the lampoonish rant of unrepentant bigot whose sister married a black man and who is looking for a sort of reverse NAACP to represent her view that the race “needs to be kept clean.”

Some examine the shortsightedness of institutions like organized religion and the military, especially as some characters return in the second act to chart their evolution. One character is a gay minister in a small town struggling with her church’s refusal to allow same sex marriages; she eventually leaves to minister (using the word as a verb) at a community church that embraces all sexuality.  There’s the homophobic career military man who slowly discovers his sexuality in the midst of  “don’t ask, don’t tell,” and eventually finds, Peter, the love of his life who he plans to marry.

Some situations are hardly revelatory, such as the lesbian whose mother refuses to come to her daughter’s wedding to another woman. Here it is Alexander’s acting chops that make the moment gut-wrenching as the character reads what seems to be Mom’s congratulatory greeting card that turns out to be a tragic declaration of an insurmountable chasm that even the mother’s genuine love cannot cross.

Alexander, a graduate of New World of the Arts, Barry University and the University of Miami, created this evening based on interviews over several years.  When the work bowed at a workshop at M Ensemble in September, Alexander had the directorial guidance of Karen Stephens, a veteran of her own acclaimed one-woman show Bridge and Tunnel. Alexander could use an extra set of eyes and ears again.

Several monologues just end without a discernible climax. Alexander’s connective introductions to the pieces, in which she speaks to the audience and offers them  Oreos, are mostly unnecessary interludes that allow Alexander to indulge in screeds of her own.

Alexander uses varied voices and expressive body language to evoke different characters, but it is still difficult to track who is who although she switches shoes for each.  It would help if she added some other clothing that would make these transitions clearer.

But even with its flaws, the gallery of portraits – by turns witty and contemplative – produce a poignant and illuminating evening.