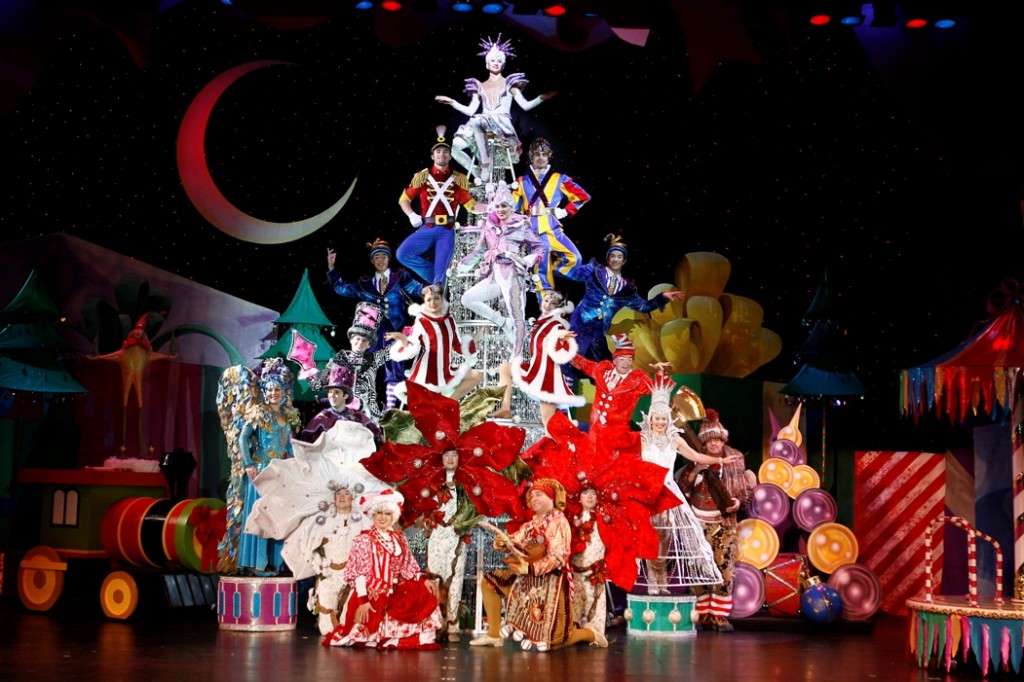 Editor’s Note: Once again, we’re in that part of the season when we have three to five openings a week. If you don’t find the review you’re looking for in the center column, check out the list of recent reviews in the upper left-hand corner of the page or by clicking the teal-colored “Reviews” button above.

It’s such a cliché, but true: The most satisfying spectacle amid all the glitter, spangles and amazing feats at the first matinee of Cirque Dreams Holidaze was the blaze of delight in the face of the little girl in Row K at the Broward Center at first matinee.

But it wasn’t only the kids hypnotized by the procession of tumblers, contortionists and athletic performers. Kids of far more advanced chronological ages were also entranced.

Acknowledge that Neil Goldberg’s Pompano Beach-based production company Cirque Dreams doesn’t have the same budget as that Montreal firm with a similar name – neither does the Federal Reserve or the government of Denmark.

But with that caveat, Goldberg’s operation has developed a smooth machine for churning out highly-polished, undeniably entertaining iterations of nouveau circus that have enchanted 50 million people across the hemisphere.

They have a formula or recipe: take classic circus acts (heavy on the acrobats, tumblers and clowns) clothe them in as much new age music, lush costumes, spectacular sets and quicksilver light changes as possible, all barely unified by an amorphous theme. All of the performers double and triple as the background in other acts giving you a sense of community.

Cirque shows in general and Cirque Dreams specifically is stage entertainment for those with ADHD. Rarely are there less than three things to take in at one time. For instance, a couple of guys are risking their lives or at least a lifetime of chiropractor bills contorting themselves while a mellifluous voiced singer stands on the side crooning some tune while elves change scenery behind them, while some of the performers from the last skit glide by in different costumes dressed as dancing candy canes or huge snowmen, gliding past the superhuman effort in an almost insulting act of pulling focus. At the first act finale, a youngster and his adult handler delivering superhuman feats of acrobatic skill are nearly lost among the procession of distractions including an inflatable two-story tall gingerbread man.

In the end, these shows are mostly the same corps of amazingly skilled jugglers, acrobats and clowns. The key is how imaginatively they are re-packaged and Goldberg’s staff has a talent for stuffing a stage with everything he can afford. The opening tableau of Christmas tree ornaments coming to life was as lush a scene as you’d expect at Radio City Music Hall.

Credit the Rococo costumes designed by Lenora Taylor and Santiago Rojo, ranging from a purple-spangled Dickensian singer in Victorian regalia to a glittering penguin balancing atop a series of blocks and balls. Larger-than-life scenery, too, creates a sense of peeking under the tree including candy canes and wooden soldiers that reach from the floor to the top of the stage.

There’s no other plot, just a non-stop parade of circus acts tricked up in Christmas costumes and props, plus a wall of perpetual sound from three talented vocalists and loud pre-recorded music written by Jill Winters and David Scott.

There are the ever reliable but still amazing staples: the buff guy soaring in a circle while holding onto long silken drapes, the petite Asian women juggling a small wheel on a rope and later striking acrobatic poses on moving bicycles, the guy juggling eight balls at once. You’ve seen most of these acts before, but everyone here is still giving their all with a huge grin.

Goldberg has hired some mouth-dropping performers, but two acts stood out. In one, a pair of angels (Changwei Miao and Jiajia Liu) perform a delicate ballet of acrobatics topped off by one standing en pointe on the other’s head.

The other was a quick change act in which magicians Anastasiia Kriukova and Jeferson Alexandre (who married Monday) transform their entire costumes nearly a score of times while being covered for less than two seconds by a large cloth tube.  Theater pros know the concept of dressing one costume under another as a standard technique, but the speed and frequency of the changes made that much underdressing seemingly impossible.  One change was made while Jeferson simply tossed large silver confetti over Anastasiia’s head!

Holidaze has two troupes ending three-year tours this week and the show only runs through Jan. 1, so if this sounds like magic to you, don’t delay getting a ticket.

For a promotional video of a previous tour, click here

This entry was posted in Performances, Reviews and tagged Broadway Across America, Broward Center for the Performing Arts, Cirque Dreams Holidaze. Bookmark the permalink.