Posted on February 6, 2018 by Bill Hirschman 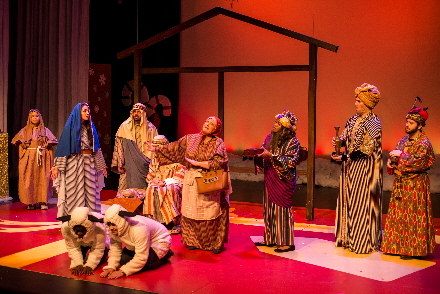 Diana Garle, second from left, in the original Winter Shorts production of Oy Vey Maria, one of the plays to be performed by City Theatre on its new Shorts on Ships program / Photos by Justin Namon

In a move that will spread the brand of Miami-based City Theatre around the world, the company begins this month producing collections of its short plays on Azamara Club Cruises luxury ships.

The effort to maximize the extended use of its huge catalog of produced and submitted 10-minute plays represents what City Theatre sees as a new producing prototype not just for itself but the theater industry.

The newly-dubbed Shorts On Ships will perform through the end of the year seven arrangements of 12 playlets mostly drawn from successful Shorts outings and selected for passengers that gravitate to this particular line.

The key to the new paradigm of exporting its work was the realization of “the portability of our art, the flexibility, the diversity,” said City Theatre Literary Manager and co-founder Susan Westfall, who first thought of the idea on a cruise with her husband six years ago.

“I thought, well, yeah, Shorts would look really good here and be a lot more fun, kind of different from the same piano player and the same juggler and the same magician.”

At the same time, City Theatre was quietly putting together packages tailored for specific groups such as lawyers’ gatherings, its expanding tours of schools and sending “best of” road shows down to Key Biscayne.

The 23-year-old Miami-based company has grown from a summer-only festival to a year-round multi-faceted operation that styles itself as “only professional theater in the country dedicated to the production of short plays and musicals” given that the preeminent Actors Theatre of Louisville has ended its effort as a curator of short plays.

Local actors Diana Garle, Barbara Sloan, Brian Reiff, Justin Schneyer and former New Theatre head Ricky J. Martinez leave Wednesday for San Diego where the first cruise departs Thursday for the Mexican coast – the first of a planned 30-plus schedule of cruises on the Quest and Journey ships leaving from Miami, Lisbon, Nice and other ports.

This first cast will play on the ships for three months straight, then be relieved by another troupe in May that is currently being cast. But the first cast will remain on call another three months in case someone in the second cast falls ill or has a conflict. The cast will be a self-contained company. Schneyer  will double as the company manager and everyone else dividing duties such as caring for costumes. While some performers are members of the Actors Equity union, the rules do not apply in international waters. But the pay reportedly is similarly commensurate.

The two shows a night will have 35-minute lineups and 45-minute lineups so that all 12 pieces will be performed during each cruise in a 300-seat cabaret venue. The plays, mostly comedies but some dramas, include such favorites as Splat! by Michael McKeever and, bowing at the most recent Winter Shorts, Oy Vey Maria by Mark Harvey Levine, plus a couple of new works. That will add 50 to 100 royalties to the bank accounts of playwrights who also include Westfall, Adam Peltzman, Justin Warner, David MacGregor, Kelly Younger, R. Eric Thomas Mel, Sheri Wilner and M. Thomas Cooper Strangers.

The specific development of Westfall’s general idea has been mostly the work of the company’s Artistic Director Margaret M. Ledford with the aid of Executive Director Bruce Leslie. The effort required extensive discussions and coordination with Azamara Club Cruises, which specializes in luxury cruises on ships that hold a more intimate 600 passengers than mega-ships. Azamara, which refers to itself as a “upscale boutique” cruise line, is owned by Royal Caribbean Cruises based in Miami.

Cast members only learned they were selected around Christmas and New Year’s. “I am super stoked,” said Garle who was in the most recent Winter Shorts. It does mean a crucial separation – she became engaged the same week. But her fiancé understands; he’s an FAU theater grad student. Garle plans to take a cutout face of her fiancé with her and take pictures of it at various ports so he can virtually travel the world with her.

Garle grew up in Miami and has taken several cruises, but never performed shipboard. She’s aware of the unusual demands of performing on a surface that might not always be steady. “We do a tango at one point. The cruise director will tell us on certain days if we’re allowed to wears heels or flats.”

But suddenly finding out that she will be out of town for three months posed a challenge for the actress and teacher who steadily works for several employers, all of whom assured her she would have work when she returned.

Sloan is equally excited at the idea of performing on a ship for the first time. A longtime award-winning actress, dancer and teacher in the region, she was racing to complete tasks Monday such as finishing her taxes.

They have been rehearsing steadily with City Theatre directors Ledford, former producing artistic director John Manzelli and the company’s founding artistic director Gail Garrisan. The first two already are on the ship in Mexico solidifying the technical elements, which use minimal props but rely on new extensive projections.