Posted on December 6, 2022 by Bill Hirschman 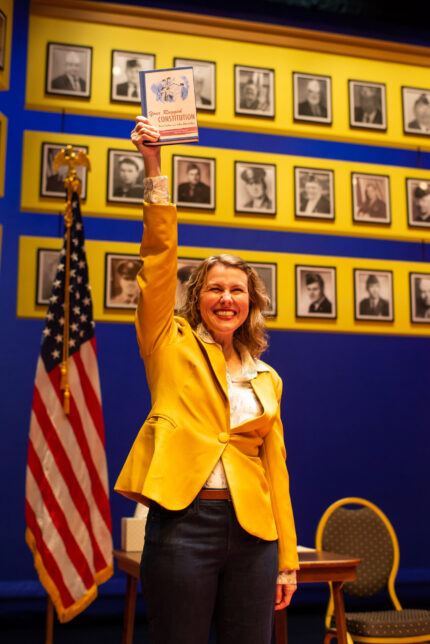 There has always been a yawning gulf of disconnect.

On one side there’s what they reverently taught you in school about Democracy, its two-and-a-half centuries’ commitment to pristine ideals, its aspirations to justice and protection and equity – nowhere more enshrined than the worldwide legendary document the United States Constitution.

And then there’s reality.

The collision, the contradictions of what we say it is, what we want it to be, and what it really is, what it really does, its strengths, its weaknesses, its virtues and its flaws are at the heart of one of the most timely and important pieces of theater to be produced in South Florida this past year — City Theatre’s What the Constitution Means to Me.

It’s not timely simply because He Who May Not Be Named suggested last week scrapping the part of the Constitution that doesn’t favor his goals. It’s timely because the Supreme Court in its recent Roe v. Wade reversal, a majority specifically raised the possibility that a wide array of bedrock rights we assumed on faith to be protected by the document or interpretations by previous court rulings are not sacrosanct.

And its timely amidst the rise over the past few years of a groundswell refusal of a diverse racially and gender identity population to accept institutionalized inequities.

Indeed, the last fifth of this 2017 play is consumed by a seemingly impromptu debate by its heroine-narrator and a 15-year-old teenager. One side argues that the Constitution should be abolished and replaced, and the other argues the opposite. Either actress may end up with the other side each night. And believe it, both sides make overwhelmingly well-reasoned and defensible arguments.

This is not to say the play has an overtly progressive bent to it. Instead, it simply calls into question the reliability of our assumptions taught in Schoolhouse Rock’s cartoon episodes.

Back up: The play is a slightly fictionalized autobiographical story being narrated to us ostensibly by Heidi Schreck who in actuality wrote the script and performed it on and off-Broadway. The mid-40s actress takes us back to when she was 15 years old and raising money for a college education by winning cash prizes in debating contests run by American Legion posts around the country, usually on a topic mirroring the title of this play.

As brought to winning life by the downright brilliant Elizabeth Price and insightfully directed by Margaret M. Ledford, the young Heidi is a genuine true believer whose enthusiasm for the document and its complexities glows as she holds forth for a Legion contest with the audience as the judges.

Speaking before a podium and surrounded by a hundred black and white portraits of past Legion leaders, (all white and all male) she speaks with a joy-filled passion and considerable teenage humor: “Two hundred and two years ago, a group of magicians got together on a sweltering summer day in Philadelphia, and they wanted to kill each other. But instead… They sat down together, and they performed a collective act of ethical visualization, or as I like to call it, a spell.”

But increasingly, Heidi the narrating adult steps out and talks about how the document has fundamental inadequacies – some exposed by situations in her own past. As the evening continues, she shares with us – with an earnest pleasure of intellectual discovery — that the common public perception of the document glosses over or ignores its inherent shortcomings.

With a goofy grin, and a jocular delivery, this gentle dynamo examines how much of the document and its amendments fall into the category of negative rights, rights that protect us from some abuse, while positive rights that guarantee something are scarce. Citing specific tragedies, she mulls how the document has not been interpreted in practice to adequately address immigration, abortion, sexual assault and other topics.

She gently mocks some of the traditionalists’ blindness by playing audio of actual Supreme Court discussions. Most prominently, Town of Castle Rock v. Gonzales, in which a woman sued a police department for repeatedly refusing to enforce a restraining order, leading to her husband murdered their three daughters. Instead of discussing the tragedy, the justices split hairs on the word “shall.”

Or she tells how the right to due process didn’t extend to abused women seeking legal protection from their spouses. And of course, for years, it didn’t address the rights of women or African Americans – and still doesn’t directly address Native Americans.

Do not fear that the program gets lost in esoteric arguments or harangues. Heidi is a pleasant guide who makes everything clear and, more importantly, relatable to our everyday lives and concerns.

If possible, this production comes out perceptibly better even than Shreck’s acclaimed New York production. This is due directly to the skill of Price and Ledford. The initially infectiously cheery Heidi morphs slowly but perceptibly as her inquiry deepens and her character traces her learning curve as she made connections to her own life and family.

Price is associate artistic director at New City Players, a teacher, producer and highly acclaimed award-winning actress who has had a heck of a past season or two with a wide range of roles, most recently as the insane Annie Wilkes in Misery. But it can be argued that with Ledford’s superb direction that this tour de force is among her finest work.

Also in the cast is Seth Trucks, first as the Legionnaire running the contest, and then in a surprising solo speech we won’t spoil. Melissa Almaguer is Price’s standby and will also perform Heidi’s role on Thursday.

The teen debater role will switch among five actresses. We saw Carlotta Avila, a  junior at Felix Varela Senor High whose innate genius gives you hope for the coming generation. Also in the list you might see is Janine Raquel Johnson.

Theater is the place to go to be entertained, and certainly, this will entertain you. But this also expands your mind. It’s thrilling to leave the theater thinking.

(A 30-minute post-show discussion led by local attorneys will be held after each Friday night performance.)

(Note: Hardly the first time this has been mentioned – if you feel that you must drink before the show, please avail yourselves of the restrooms before the show starts. It is nearly impossible to sneak down the Arsht’s noisy metal stadium bleachers without making a racket. And then, there is no way to leave the auditorium without walking in front of people trying to watch the production. Opening night, at least ten people clumped down the aisles and paraded in front of people trying to get lost in the show.)

What the Constitution Means to Me from City Theatre as part of the Theater Up Close series performs through Dec. 18 in the Carnival Studio Theater at the Arsht Center’s Ziff Ballet Opera House, 1300 Biscayne Boulevard, Miami. Performances are at 7:30 p.m. Thursday-Friday, 3 p.m. and 7:30 p.m. Saturday, 3 p.m. Sunday. Tickets are $55-60. Running time is about 110 minutes with no intermission. (305) 949-6722 or www.arshtcenter.org.

This entry was posted in Performances, Reviews and tagged City Theatre, Elizabeth Price, Margaret M. Ledford, Melissa Almaguer, Seth Trucks, What the Constitution Means to Me.. Bookmark the permalink.