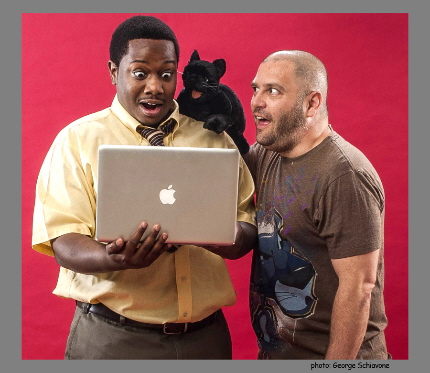 Many champions of the venerable Summer Shorts, even several of its leaders, have privately acknowledged over the years that the quality of the scripts selected and the ensuing productions have been frustratingly inconsistent.

But over the past few years under the leadership of Producing Artistic Director John Manzelli and co-founder Susan Westfall, City Theatre’s concerted efforts have focused on boosting the consistent quality of the annual cornucopia of short plays.

Now in its 19th year and about 400 plays later, those efforts are paying off. This iteration of Summer Shorts is not only the most lushly and imaginatively produced with a noticeable extra bit of polish, but it simply is more consistently funny and entertaining than any edition in recent memory.

By its nature, Summer Shorts will always have one or two pieces that will not fit the druthers of one specific audience member or another. But this year, there were no duds resembling summer camp skits rather than well-crafted theater. The script choices were generally more insightful this year with most actually having a plot or character arc; most of the comedies were leavened with a thoughtful streak.

And as always, some were better than others among the ten selected this year. The most memorable to this playgoer has to be Tornado, a world premiere by Arlitia Jones, starring Tom Wahl and Mcley Lafrance and directed by Margaret M. Ledford. The non-comedy pieces in Summer Shorts often have been among the weaker entries. But in this case, the quiet tale of a man in a sportswear store buying a football outfit for his son is the outstanding piece of the night. We can’t say much more without undercutting the experience. Jones’ script is well-made although probably not astounding on paper. What makes it work so well is Wahl’s committed performance under Ledford’s guidance whose joint work here I want to start lobbying to be at least nominated for the Silver Palms, Triple Crown, Carbonells, Golden Globes and Architectural Digest Design of the Year awards.

Committed. That’s the word that kept surfacing while watching every aspect of the show, starting most noticeably with every cast member who throw themselves into a wide and wild range of characters with complete abandon.

That’s not always easy. Shock and Awwww is a too-protracted goofball piece by Dan Castellaneta and Deb Lacusta (The Simpsons) in which two roommates are mind-controlled by their cat who is part of a Little Shop of Horrors plot among felines to take over the world. It’s a spoofy nothing saved in part by a perfect match-up with the directorial sensibility of Paul Tei of Mad Cat Theatre Company. But Lafrance and David Perez-Ribada unabashedly invest their entire souls in this silliness, especially with Perez-Ribada’s increasingly animated body language, which makes the slim single-joke premise fun to watch.

But the commitment to a professional no-excuses production extends to every aspect from Jodi Dellaventura’s sets to Ellis Tillman’s character-driven costumes to Matt Corey’s techno soundtrack to Preston Bircher’s infinitely variable lighting plots. For instance, patrons were barely cognizant of the set changes because Shorts hired choreographer Sandra Portal-Andreu and her nubile dancers to distract the audience’s attention with numbers ranging from cheerleaders’ high energy gyrations to a gentle modern dance pas de deux,

Then there’s the commitment to an A-list of actors and directors. The troupe this year includes Shorts veterans Irene Adjan, Elizabeth Dimon and Wahl, with newcomers but acclaimed locals thespians Niki Fridh and Perez-Ribada. Also in the cast are two actors affiliated with City Theatre in other ways: Mary Sansone, creative consultant to the Shorts 4 Kids program, and Lafrance who has worked off-stage at City Theatre and is now the assistant artistic director for the company as well as resident director of Shorts 4 Kids. Directors include Manzelli, Lafrance, Ricky J. Martinez, Tei and Ledford who directs half of the 10 pieces.

The show opens with Old Flame, a world premiere by Mira Gibson in which former lovers Fridh and Perez-Ribada accidentally meet at a grocery. The collision underscores how their lives have diverged, exemplified by their choice of new partners Sansone and Wahl. Ledford leads the two in examining that droll discomfort that results when lovers try to show that they have thrived after moving on from each other.

Halftime, a world premiere by Richard Dresser, is a hilarious monologue in which basketball coach Lafrance is addressing his woebegone team in a hopefully energizing pep talk. It takes a minute or so before we realize this is not quite the kind of team we think he is addressing and his speech is as much as rant about his life as the team’s shortcomings. Lafrance, directed by Manzelli, is a hoot as he cannot keep his personal problems from intruding on what is a decidedly inappropriate situation.

The Scottish Play by Theo Reyna, the only local playwright represented, was first seen as part of Mad Cat’s Mix Tape 2 this season. The satire depicts a disintegrating marriage that affects a teenaged daughter. But the family is portrayed metaphorically and anthropomorphically as the country of Scotland (Dimon with a brogue), Britain (Wahl), their offspring Oil (Sansone) and the interloper America (Lafrance). It got laughs from the audience but frankly it was funnier in the Mix Tape rendering.

My Husband, directed by Martinez, is a Paul Rudnick farce seen at The Gay Marriage Plays production at the Parker a few seasons back. Adjan is at her best as the ultra-liberal mother who kvetches at her son Perez-Ribada for not taking immediate advantage of the gay marriage option. When he points out that he is not in a relationship, the socially competitive mother reveals a proactive answer.

It’s The Jews by John Minigan is a cute little piece, again a shade long. A playwright Perez-Ribada is nonplused when Dimon as the artistic director of a non-profit theater suggests some outrageous changes to his script about the Holocaust.  You’ve seen the set-up before, but the actors carry it off.  This is a good spot to mention the chameleonic range and kinetic energy of Perez-Ribada who can portray demented or woebegone or passionate. Before teaching for the past few years, he appeared everywhere (most recently I recall in Actors Playhouse’s Joseph and the Amazing Technicolor Dreamcoat). We’ve missed him, but sadly for us he’s off to try his luck in New York City.

The Click is another quiet piece, a world premiere from Leslie Ayvazian whose work has appeared in Shorts and who taught last year at City Theatre’s annual CityWrights seminar for playwrights.  Sensitively directed by Manzelli, it’s a relationship piece portraying a couple, Adjan and Wahl, working through the husband’s reluctance to let his wife help him deal with an injury to his arm.

Make John Patrick Shanley Go Home, a world premiere by Holli Harms directed by Ledford, is another silly skit with Fridh as a budding writer who freaks out with her friend Dimon and Adjan when she spots the titular playwright across the room at a restaurant– a playwright who criticized one of her works during a seminar. As with some other pieces here, it’s the acting and directing that makes the script watchable.

Joshua Consumed An Unfortunate Pear, a City Theatre commission from Steve Yockey, was the finale that didn’t quite finish opening night. The story of a man who finds pears that bestow immortality ended a few minutes prematurely – along with the entire evening – when an audience member took seriously ill. The gentleman recovered and walked out of the theater under his own power, Manzelli said. Yockey is another former Shorts contributor who taught at CityWrights last year.

On a happier note, Westfall was honored before the show when the stage inside the black box theater inside the Arsht Center was named for her. Westfall, a playwright herself, not only founded City Theatre with Stephanie Norman and Elena Wohl, she helped expand its scope with the CityWrights program. 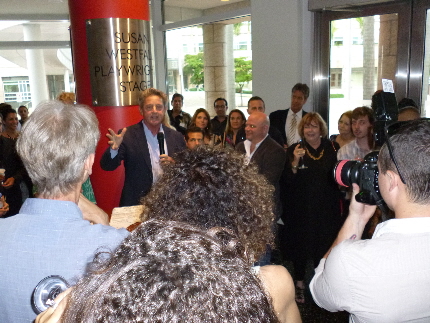 City Theatre co-founder Susan Westfall, third from the right, is toasted by her husband Alan Fein and well-wishers at the dedication of the Susan Westfall Playwrights Stage at the Arsht Center’s Carnival Black Box Theater / Staff photo