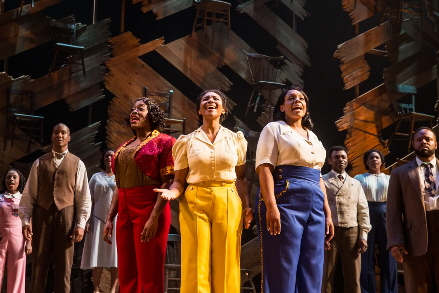 The cast of The Color Purple including, from left, Carla R. Stewart, Adrianna Hicks and Carrie Compere / Photo by Matt Murphy

As overwhelming as The Color Purple is to the eyes and ears, it’s the heart that is most affected in this Broadway Across America tour production at the Arsht Center.

Powerful voices trumpet then caress a gorgeous score as actors expertly deliver all the possible emotions laden in a well-crafted but challenging script. This rousing and deeply moving production is only here through Sunday and cannot be recommended highly enough for lovers of musical theater.

Granted, enunciation is a serious problem. Many of the lyrics are lost, but the messages of love, hope, faith and self-realization comes across clearly because the music and the delivery of it are so full-bodied that the meat of the meaning is crystal clear.

This tour is based on minimalist John Doyle’s 2015 Broadway edition that won the Tony Award for Best Revival.  While the scale is intentionally and significantly more modest than the 2005 original production, it is far more effective because it focuses on the people and the story rather than the production values.

Director-set designer Doyle, who did similar work with Sondheim’s Sweeney Todd and Company, is also a master at kinetic staging and at inserting little flourishes of theatricality. When pregnant heroine Celie delivers her baby early on, the actress hand-over-hand pulls a long white sheet from inside her and then folds it into the swaddling blanket for the unseen child she cradles in her arms.

The plot is drawn from Alice Walker’s 1982 Pulitzer Prize-winning novel and the acclaimed Stephen Spielberg film 1985.

The story ranging from 1909 to 1949 opens in rural Georgia with the downtrodden 14-year-old Celia giving birth to the second child by her own father and seeing it given away by him. Her only solace is her deep abiding love for her sister Nettie. Four years later, local farmer “Mister” seeks to marry the prettier Nettie, but the father agrees only to offer the plainer Celie along with a cow. Celie agrees only to preserve Nettie’s dream of being a teacher.

The tyrannical Mister is even more physically and psychologically abusive than Celie’s father. He is open about his on-again off-again romance with Shug Avery, a local woman who has become a minor juke joint star in Memphis. Nettie tries to escape her father by staying briefly with Celie, but Mister’s attention drives her away and he keeps them apart, even hiding her letters to Celie. All of this makes Celie question the existence of God.

But when Shug returns to town, the two women fall deeply in love, with Shug boosting Celie’s low self-esteem. Celie is also confronted with the example of Sophie, the girlfriend of Mister’s son, a woman who takes no abuse off anyone and who threatens to kill any man who hits her. This is only the set-up for Celie’s journey toward pride and independence.

Two of this production’s outstanding interlocking virtues relate to how well it overcomes a serious problem plaguing most musicals adapted from popular titles in other media. Often the script just cherry picks high points of a familiar narrative as if it was checking off items on a freshman English outline. The result is often zero dramatic drive, no subtlety of plot development and producing one-dimensional characterizations. Therefore, actors are hard pressed to convincingly portray that they have learned lessons or their character has grown as a person.

This is not a problem here, first, because Marsha Norman is a skilled experienced playwright who creates a smooth subtle integrated narrative arc and depicts character development – often all with just a few sentences of dialogue. This is dauntingly difficult and only a couple of dozen people like Oscar Hammerstein II mastered it.

Second, it works here because this amazing cast, following the direction of Doyle and associate Matt DiCarlo, triumph in showing the characters’ evolution over time, from their body language to their vocal tone. All of them depict changes and realizations convincingly, notably Gavin Gregory as Mister, but above all the simply stunning work of Adrianna Hicks as Celie.

You never doubt her transformation for a moment. She starts as a lost soul afraid of everything and hoping for nothing. Her tentative eyes and perpetually down-turned lips betray an internal agony. Then scene by scene, she grows in self-worth until the inevitable explosion is totally credible. Even better is how Hicks sells Celie’s persona in the closing scenes when she is at peace with who she is. Any actor in musical theater and any critic can tell how difficult and rare this is.

We’d need another page to describe and praise the entire cast’s voices, but when Hicks and Carla R. Stewart as Shug meld their voices in their mutual discovery “What About Love?” the result is the aural creation of two souls intertwining. And Celie’s 11’o clock number discovering and declaring her self-worth, “I’m Here,” is overwhelming even when you can’t understand half of the words.

Some of the leads like Hicks, Stewart and Carrie Compere as Sofia appeared in the Broadway revival, and their comfort pays off as they inhabit these characters completely. But the others are just as impressive including the aforementioned baritone Gregory, the silver-throated N’Jameh Camara as Nettie, and J. Daughtry as Harpo. When Compere launched into her defiant rejection of spousal abuse, “Hell No!” this #metoo-minded opening night crowd erupted.

Doyle’s set is rising panels of wooden slats adorned with chairs, a rough wooden platform with a few steps and nothing much else except even more kitchen chairs and a few washday baskets filled with white sheets to be folded throughout the evening. But Doyle imaginatively uses those chairs in scores of ways including as farm implements. That is elevated by the ever changing environments and moods perfectly evoked by Jane Cox’s lighting.

The band led by Darryl Archibald expertly navigates this eclectic score with verve and precision, and if enunciation was a problem, the sound crew made the music sound pristine. A nod is also due production stage manager Melissa Chacon. These are the people who keep a long-term tour as fresh at each stop as it was when it first opened.

We saw the original production and the feelings evoked pale compared to this gentle, raucous, reverent, sexy and uplifting evening of theater.

The Color Purple from Broadway Across America plays through March 4 at the Adrienne Arsht Center for the Performing Arts, 1300 Biscayne Blvd., Miami. Performances are 8 p.m. Tuesday through Saturday; 2 p.m. Saturday; 1 p.m. and 7 p.m. Sunday. Running time 2 hours 15 minutes including one intermission. Tickets $29-$145 . Call (305) 949-6722, or online at arshtcenter.org.

This entry was posted in Reviews and tagged Broadway Across America, The Color Purple. Bookmark the permalink.