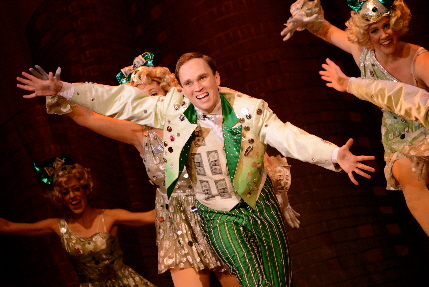 That percussive sound rolling through Boca Raton this weekend was the deafening echo of 32 tap shoes pounding the stage of The Wick Theatre’s production of 42nd Street.

The answering rumble wasn’t thunder; it was audiences almost unconsciously clapping in relief that this kind of ably-produced mainstream musical theater had not vanished in a post-modern world of snide cynicism.

The 1980 valentine to Broadway musicals, lovingly ribbing yet luxuriating in the hoary memes of a 1933 film, is rarely mounted because the expensive, difficult show requires a large corps of no-excuses talented dancers. Credit The Wick with taking on such a challenge in only its third production.

But what a production: The glorious dancing ensemble atop stacked huge coins in “We’re In The Money,” the “Slaughter On Tenth Avenue”-like pas de deux in the “Forty-Second Street Ballet” and the electric and infectious joy of “Lullaby of Broadway,” all of it is pure hallelujah,

A few more days of performance will clean up a few sloppy edges and sharpen the execution a few nagging millimeters. But this is quibbling. This ranks among the most entertaining classic musicals seen locally in quite a while.

The plot is that backstage tale about down-on-his-luck producer/director Julian Marsh (Jim Ballard) gambling his future on one last Ziegfeld-like revue. When his troublesome leading lady Dorothy Brock (Aaron Bower) breaks her ankle on the road, the fresh-faced newcomer Peggy Sawyer (Julie Kleiner) takes her place alongside male lead Billy Lawlor (Alex Jorth). And as Marsh says, “You’re going out there a youngster, but you’ve got to come back a star!”

If the overall production hadn’t been so strong, we wouldn’t have waited this long to spotlight the two most dazzling elements: Julie Kleiner glowing like neon from the stage as Sawyer and the outstanding choreography of Ron Hutchins.

Start with Hutchins, who is locally-based but works around the country. He has staged many local shows but he is usually limited by earnest dancers of, shall we say, variable skill levels. Finally, gifted with a troupe capable of whatever he asks, Hutchins’ talent blazes as if he was hit with a carbon arc lamp. From the precision stampede of the group numbers to the delicate moves of the duets to blazing solo turns, this is classic Broadway choreography as it is rarely seen in South Florida. How much is Hutchins’ original footwork and how much is that of the original choreographer/director Gower Champion is impossible for a civilian to say, but Hutchins has indisputably led and forged the terpsichorean excellence on view. 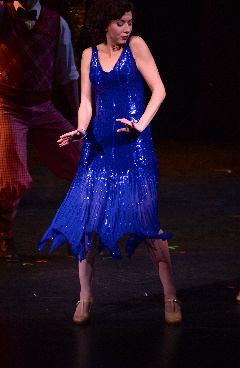 And now. Anyone paying attention the last few seasons has admired Julie Kleiner’s versatility and skill in such diverse offerings as the woebegone Penny in Actors Playhouse’ Hairspray, the troubled young nun in the Maltz’s Doubt, the understandably puzzled girlfriend in Cock at GableStage, and then as one of the sisters in The Wick’s recent White Christmas.

But if there ever was a breakout role for her, Peggy Sawyer is it. Her quirky lovely face is blessed with expressive eyes and a beaming smile that can convey an endearingly naïve girl at one point and later a slyly knowing young woman. She has a unique voice that sounds like a breathless teenager one moment, a sultry woman the next and a Broadway belter the next.

All of which delays mentioning her stunning ability as a dancer. Even in White Christmas, she was not this good. While what she has achieved must have taken countess hours of work, she makes the most complex steps not only seem effortless but a natural expression of her character. It has to be seen to be appreciated.

If you’re able to pull yourself for a moment out of the fiction on stage, study how Kleiner is always acting with her face while she dances. Peggy wears her heart on her leotard and Kleiner exhibits every morphing bit of disappointment, fascination, puzzlement and joy that Peggy is feeling even as she is pounding away at 180 beats a minute.

The show’s breezy tongue-in-cheek tone and sprightly pacing is pretty close to perfect, which it should be since this is director Norb Joerder’s 15th run at the material, literally. He knows exactly how to simultaneously respect and lampoon the period which is a challenge since it interpolates Depression Era standards by Harry Warren and Al Dubin, with a well-crafted piece of classic musical comedy writing from post-Eisenhower stalwarts Michael Stewart and Mark Bramble (Hello Dolly!, Bye Bye Birdie, Carnival, Barnum etc.)

Further, Joerder makes no bones that he is recreating the original work of Gower Champion who famously died a few hours before opening night.  For instance, those who saw the original will recall the opening coup-de-theatre in which you hear the crashing tapping behind the red curtain, which then raises only about three feet to expose dozens of feet slamming the floorboards in perfect time – already a nostalgic sight in 1980. How close is Joerder’s work to Champion’s? Look at the video of the “Lullaby of Broadway” number from the original production (http://www.youtube.com/watch?v=QNAM45hCBpw).  On the other hand, he has infused this production and this cast with a polish and verve that is remarkable.

The Stewart-Bramble book was funny 33 years ago for its knowing references to outdated situations, but now those references are almost ironic such as the chorines being paid $32 a week for four weeks’ rehearsal and a week out of town, plus the whole lush production costing $100,000.

The Warren-Dubin songbook is crammed with those chirpy fantasy standards meant to counteract the crushing melancholy of the Great Depression like “You’re Getting To Be A Habit With Me” and “About A Quarter To Nine.”

Back in Florida 2014, most of The Wick’s supporting cast is dead on. Tall, handsome Jim Ballard creates the producer with a tough hide but an enduring love for fickle Broadway. His mellow baritone featured in Palm Beach Dramaworks’ The Fantasticks caresses “Lullaby of Broadway.” When he gives that speech to Peggy about “musical comedy, the most glorious words in the English language,” every devoted theatergoer should feel their throat close. He also has some chemistry with Kleiner, understandable since they have appeared together in Doubt, In The Next Room and other works.

Jorth, fresh off the Maltz Jupiter Theatre’s Annie and earlier the Agatha Christie BBC Murders, is a solid choice as the grinning charismatic Lawlor. Tasked as the other lead tap dancer, his bliss is evident from his feet-blurring solos to his earning his place at the front of every chorus number.

Bower, who played the jaundiced boarder in the Maltz’s Cabaret, is fine as the vain diva Dorothy. Once again, Missy McArdle creates a tart-tongue seen-it-all Broadway baby, half of the Marsh follies’ composer-lyricist team with Jeffrey Bruce.

A tip of the hat to Christopher George Patterson as the mythical show’s dance director, Andy. Patterson’s ebullient tap dancing has been the outstanding element of a half dozen shows at the Broward Stage Door and he’s finally in a production equal to his talents. A nod also to Alan Gerstel as the Texas sugar daddy and Patrick A. Wilkinson as Brock’s lover.

But special attention must also be paid to the ensemble, many of whom create specific characters rather than simply be faceless cogs in a dance machine: Alison McCartan, Janet Wiggins, Alexandra Kathryn Dow, Sophia Ludovici, Lindsay Nantz, Casey Weems, Brooke Martino, Lauren Bell, Abby Perkins, Frank Vomero, James M. Hansen, Elliot Peterson, Stephen Petrovich, Sean Zia and Sean McGee.  When the Wick announced it was doing 42nd Street, many observers scoffed that there wasn’t enough local talent up to the job. Well, while some of these dancers are from out of town, most either live here or have local roots in their past.

Obviously, one reason that theater founder Marilynn Wick chose 42nd Street was her Costume Museum features pieces from the 1980 production, designed by the late great Theoni V. Aldridge and the 2001 Broadway revival by Roger Kirk. What we see on stage are likely not the 30-year-old pieces. But executive producer Kimberly Wick and her staff at their Costume World rental company have recreated a dazzling parade of wardrobes, from the workaday rehearsal costumes to pinstripe suits to shimmering gowns, all feathers and spangles and fedoras and spats.

The musical direction by Michael Ursua is faultless although that bright peppy Broadway pit band exists only in megabytes. The scenery mirroring the original production’s was cloned by Gateway Playhouse and augmented by Florida’s Sean McClelland. The fluid lighting is by Thomas Shorrock and the sterling sound, at least where we were sitting, was courtesy of Adam Pitts.

Sometimes nostalgia feels cheap and cheesy, a pitiable desire to live in the past. While this 42nd Street will cheer a heart yearning for yesterday, this production is as vibrant and energizing as anything you’ve seen last year.