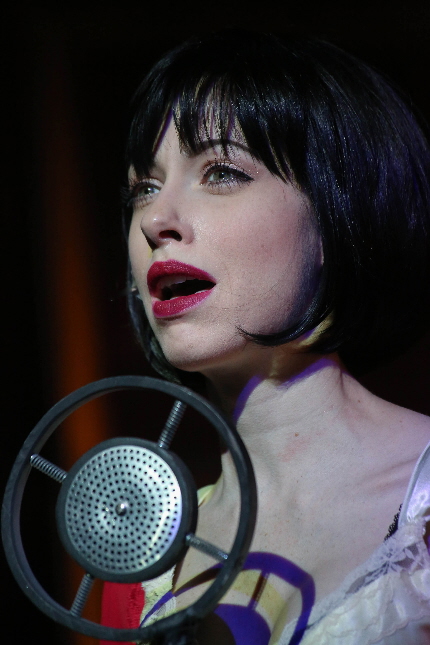 Broward Stage Door’s courageously adult and resplendently lewd production of Cabaret ain’t your condo grandmother’s musical comedy. The only thing missing from this vision echoing the Sam Mendes revival is the nipple ring.

The 1966 musical, which was bracing for its time, remains as fresh and relevant a cautionary tale for our time as then. Just watch any broadcast invoking the name Kardashian – although Cabaret’s party girl Sally Bowles is a far more tragic figure because she had a soul at one time.

The unspoken but certain knowledge that she is selling that soul gives the required depth to the characterization delivered so well by Katherine Amadeo. Even at her devil-may-care gayest, Amadeo’s Sally is camouflaging a terror that someday she be unable to evade a truth she will not even allow herself to define.

This comes unavoidably clear in her rendition of the title song. Perennially sung out of context, it usually mistakenly celebrates living life fully. In context, as Amadeo illustrates, it’s an acknowledgement of a lifelong irresponsibility that is now leading inevitably toward self-destruction.

Cabaret was based on Christopher Isherwood’s short stories about dancing-toward-the-abyss decadence of Berlin around 1930 as Nazism gained a popular foothold. The underrated script by Joe Masteroff was brilliantly melded by director Hal Prince with a score by John Kander and Fred Ebb that alternated scenes of the deteriorating situation in Berlin with lascivious vaudeville numbers inside the uber-decadent Kit Kat Club. American aspiring novelist Cliff Bradshaw observes the downward spiral while bonding with Bowles who pointedly ignores the gathering storm.

The musical was cutting edge for a mainstream musical in 1966 as was Bob Fosse’s 1972 film version. But the 1993 London revival by Sam Mendes (transferred to New York in 1998 and revived last year) was a complete rethink that eliminated any doubt about the bi-sexuality of Cliff as well as the iconic club Emcee. (Ironically, 82-year-old Joel Grey who made his rep in the part in 1966 announced he was gay on Wednesday). It also took the decadence as far as mainstream musical had gone before.

The staging, sets and performances closely resemble if not actually copy the Mendes revival. But Kelley and the Florida folks invest it with a complete commitment.

Amadeo is a proven dramatic actress recently honored with a Carbonell nomination for the title character in Miss Julie at The Naked Stage that she co-founded. So it’s no surprise that she fully inhabits the sybaritic Sally and injects her with the sad pathos of the already compromised. But under the titanium shell Sally has constructed, Amadeo exposes the yearning for something better in her rendition of “Maybe This Time.”

Ronen Bay, a newcomer to Florida, is just as good as the profligately louche Emcee, a dissolute creature damned long ago. His arching eyebrows over piercing eyes are complemented with a sickening leer. His singing voice is adequate although not quite as compelling as his overall aura.

Saddled with the difficult role of Cliff is Pierre Tannous who was the French king in Palm Beach Dramaworks’ The Lion in Winter and the hero in Island City Stage’s POZ. He exudes enough charisma to make us care about someone who starts off a buttoned-down observer but whose emerging social conscience forces him to care about what is happening around him.

Elissa D. Solomon does a fine job as the pragmatic survivor Fraulein Schneider who sings the paeans to practicality “So What?” and “What Would You Do?” Michael H. Small portrays yet another his patented affable uber-mensch as the Jewish grocer Herr Schultz.

For all the effort being expended, the overall production seems noticeably muted, even falling a shade short of what it aims for. Some of this may be that Stage Door is using a pre-recorded digital orchestra. While they could not afford a large enough live band to matter, the immediacy and clarion sound of on-stage musicians usually elevates the electricity further. The musical direction is by Michael Larsen.